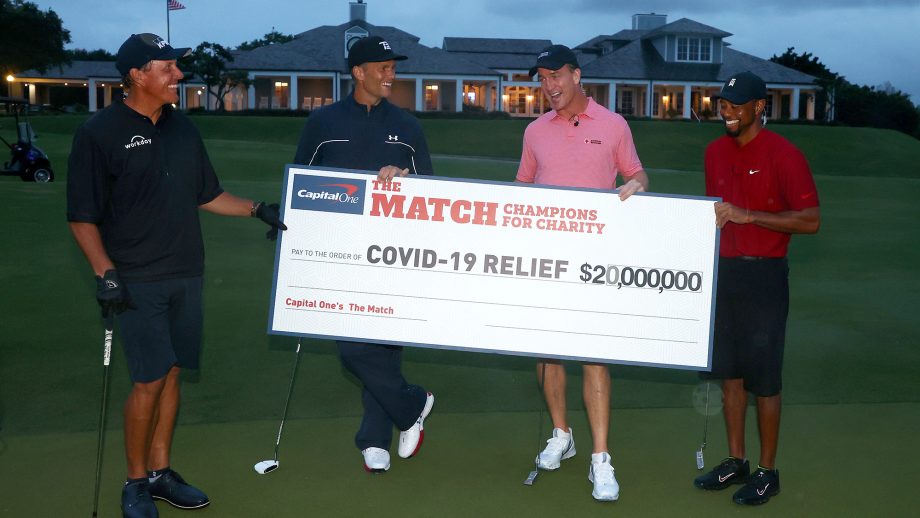 HOBE SOUND, FLORIDA - MAY 24: Tiger Woods and former NFL player Peyton Manning celebrate defeating Phil Mickelson and NFL player Tom Brady of the Tampa Bay Buccaneers on the 18th green during The Match: Champions For Charity at Medalist Golf Club on May 24, 2020 in Hobe Sound, Florida. (Photo by Mike Ehrmann/Getty Images for The Match)

<![CDATA[Tom Brady delivered the shot of the match that made it easy to forget the rest of his swings. Tiger Woods didn't miss a fairway and earned a small measure of revenge against Phil Mickelson. The PGA Tour is set to return in just over two weeks, and it has a tough act to follow. In the second and final charity match that brought live <a name="AUTOJUMP">golf to TV, this exhibition was as entertaining as the real thing. Woods lagged a long birdie putt close enough that his partner, Peyton Manning, didn’t have to putt. That secured a 1-up victory over Mickelson and Brady in “The Match: Champions for Charity.” The goal was to raise $10 million or more for COVID-19 relief funds, and online donations sent money climbing toward about twice that much. This made-for-TV exhibition would have been worth pay-per-view, the model Woods and Mickelson used for a $9 million winner-take-all match in Las Vegas over Thanksgiving weekend in 2018 that Mickelson won in a playoff under lights. It felt forced, lacked banter and turned out to free because of technical issues. Throw in two NFL greats in Brady and Manning, and this allowed viewers to ride along for 18 holes at Medalist Golf Club among four of the biggest stars in sports. Justin Thomas pitched in as an on-course reporter, bringing a mixture of humour and insight with the right amount of words. Woods and Manning took the lead on the third hole and never trailed, building a 3-up lead in fourballs on the front nine, with Manning making two birdies (one was a net par). Brady, whose six Super Bowl titles are more than any NFL quarterback in history, took a beating on social media and in the broadcast booth from Charles Barkley, who twice offered $50,000 of his own money toward charity if Brady just hit the green on a par 3. He missed so far right it would be comparable to a pass that landed three rows into the stands. New Orleans Saints coach Sean Payton weighed in on Twitter, noting Brady signing as a free agent with Tampa Bay by saying he liked the “Florida” Brady much better. Brooks Koepka offered $100,000 if Brady could just make a par. https://twitter.com/BKoepka/status/1264663710867623936 One shot shut everyone up. Never mind that Brady had to take a penalty drop before getting back to the fairway on the par-5 seventh. With his fourth shot, with Barkley needling him relentlessly, Brady’s shot landed beyond the pin and spun back into the cup.

“Shut your mouth, Chuck,” said Brady, whose microphone piece dangled off the back of his pants.

Woods still thought he won the hole with a 25-foot eagle putt that instead spun hard off the back of the lip. All that, and they ended up halving the hole.

Donations for COVID-19 relief funds kept piling up, and the entertainment didn’t stop even as the rain returned. It caused a 45-minute delay at the start, and as Woods said on the practice range, “I don’t normally play in conditions like this.” Mickelson brought out his “Tiger Slayer” putter that he used to shoot 64 at Pebble Beach in 2012, the last time they were in the final group on the PGA Tour. Woods shot 75 that day. It didn’t help Lefty with a few critical birdie putts to square the match, though he rolled in a 15-foot par putt to stay 1 down with two to play. The back nine was modified alternate shot – all players hit tee shots, and it was alternate shot from there. It was key for the quarterbacks to find the fairway for the pros to hit shots into the green, and Brady came through until the 18th. Woods was playing for the first time since Feb. 16 when he finished last at Riviera in Los Angeles. He chose not to play the next four weeks with his back not feeling just right, and then the pandemic shut down golf and sports worldwide. Woods looked sharp for the most part, with his game and his words. Mickelson on the fifth hole asked Woods to mark his ball from some 80 yards away. “You want me to mark with a U.S. Open medal?” said Woods, a three-time champion of the only major Mickelson hasn’t won. “Do you have one? I have some silver ones,” Mickelson said, referring to his record six runner-up finishes. Mickelson boasted about taking Woods down on his home course at Medalist, and now their TV matches are tied at 1, even with each getting a little help. Mickelson says he was a little nervous on the front nine until he found his groove, driving the green on the par-4 11th with Brady making a 20-footer for eagle that began their rally. “Phil said he was nervous. I know Tom and I were comparing notes,” Manning said. “To be behind the ropes in these guys’ worlds, to be in the arena with them, it was really a special experience. I was not comfortable the entire time. Knowing $20 million was raised and helping people going through tough times, it was an honour to be invited. “It’s something I’ll always remember.”]]>