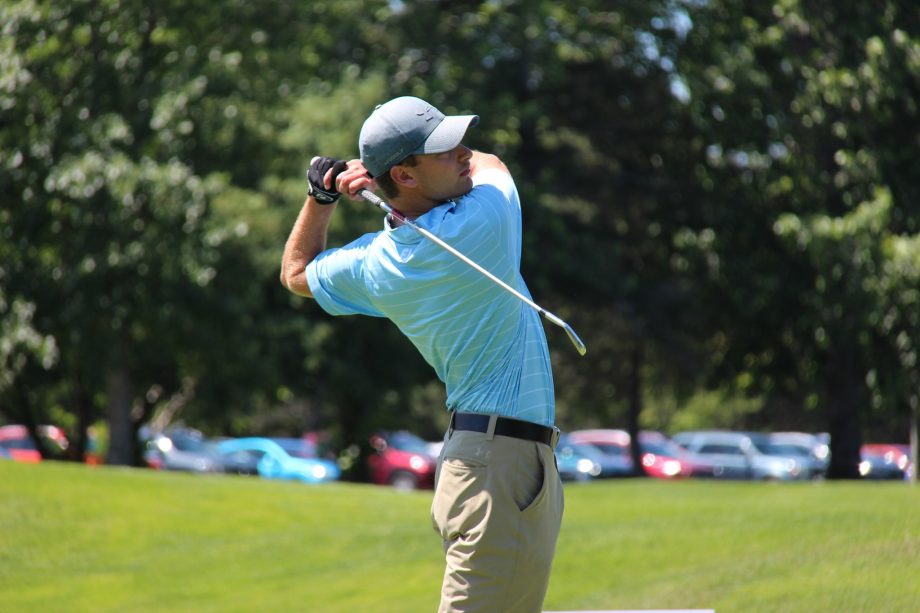 BATHURST, NB– A sunny Saturday greeted players at the Gowan Brae Golf & Country Club for Round 2 of the NB Men’s Amateur Championship, Presented by Four Rivers Brewing Co. A delayed start of one hour from Round 1 was a strategic decision by Golf NB’s Rules Committee Chair, Dave Morison. 8:00 AM starting times for Saturday provided additional drainage opportunities after an excessive amount of overnight rainfall.

Many players took to the course on Saturday with the goal of out-performing their first-round results. The combination of clear skies, a small breeze, and summer temperatures, set Gowan Brae up to provide the ultimate test of championship golf. The temptation of risk and reward, paired with what is considered to be one of the toughest stretches of golf holes in Canada, from 13-17, set up for a challenging moving day in Bathurst.

Round 1 leader, Michel Landry teed off at 1:42 accompanied by Westfield’s Stuart Earle and Kingswood’s Stephen Anderson. A total of 13 players were under par after Friday’s opening round, with the final amateur pairing totaling an astonishing 15-under par within their group. The trio along with many other title chasers looked to make some moves ahead of Sunday’s final round.

It was Westfield’s Stuart Earle who was able to adapt quickly to Saturday’s difficult scoring conditions. A front nine 32, 4-under put the former Team NB player in the NB Men’s Amateur Championship driver’s seat heading into the back nine. The toughest stretch of the course was up ahead and a well-played front nine allowed Earle to hold on to a 1-under, 71 after a more strenuous 3-over back. The Woodsman Point native would see his two-day total of 138, 6-under move him to the top of the NB Men’s Amateur leaderboard heading into Sunday’s final round.

Fredericton’s Michel Landry joins Earle in the final pairing, after carding a second-round 1-over, 73. The Riverside Country Club’s Brett Taylor made a moving day push with a 2-under 70, propelling him into Sunday’s final group. The final pairing of Earle, Landry, and Taylor will tee off on Gowan Brae’s par-4 first hole at 12:51 PM Sunday.

In the NB Men’s Mid-Amateur Championship, Michel Landry of the Fredericton Golf Club holds a two-stroke lead ahead of Riverside’s Brett Taylor. The duo will battle out for the Mid-Amateur crown while also attempting to make a push on Earle for the Amateur title. Sitting in solo third position is Darren MacPherson of the Restigouche Golf Club, Saturday’s round of even-par 72 positions MacPherson 3 shots behind the Mid-Amateur leader, Michel Landry.

Saturday’s low round of the day belongs to Patrick Cormier of the Fox Creek Golf Club. A more than impressive 3-under, 69 in round 2’s difficult conditions gives the Bishops University athlete the #WhoWentLow title of the day.

The Dormie Workshop Par-3 Challenge rewards the amateur player who performs the best on all par-3’s during the course of the championship. Kingswood’s Stephen Anderson and Golf NB Public Player, Liam Llewellyn share the lead after two rounds. The pair both sit at even-par heading into Sunday.

A major highlight in this week’s field is The Riverside Country Club’s, Isaac Dixon. On Dec 30, 2020, Isaac sustained an unfortunate injury while playing Junior A Hockey for the Grand Falls Rapids. After sustaining an L1 vertebrae bust and a severe spinal cord injury, there were doubts as to if he would be able to participate in competitive sports ever again.

Isaac, a former Junior Club Champion at Riverside was left with a long path to recovery. With incredible strength, determination, and support from his loved ones and friends, Isaac is once again able to tee it up. Golf NB is thrilled to welcome Isaac and his family to Gowan Brae this week as the 1.8 Index looks to leave his mark on this year’s event. Isaac is a proud member of Paragolf Canada as he begins his journey in adaptive golf.

Adding to the 2021 NB Men’s Amateur Championship’s feel-good moments, the Fredericton Golf Club’s Gary Jenkins played Saturday’s round without a power cart for the first time in numerous years after sustaining a serious leg injury. Gary has been a staple on the New Brunswick Senior Tour and club invitationals, as well as Golf NB’s events.

Sunday’s third and final round of the 2021 NB Men’s Amateur Championship, Presented by Four Rivers is scheduled to commence at 7:00 AM. Players with the highest two-day gross total will tee off first, followed by the leaders in the middle of the day.