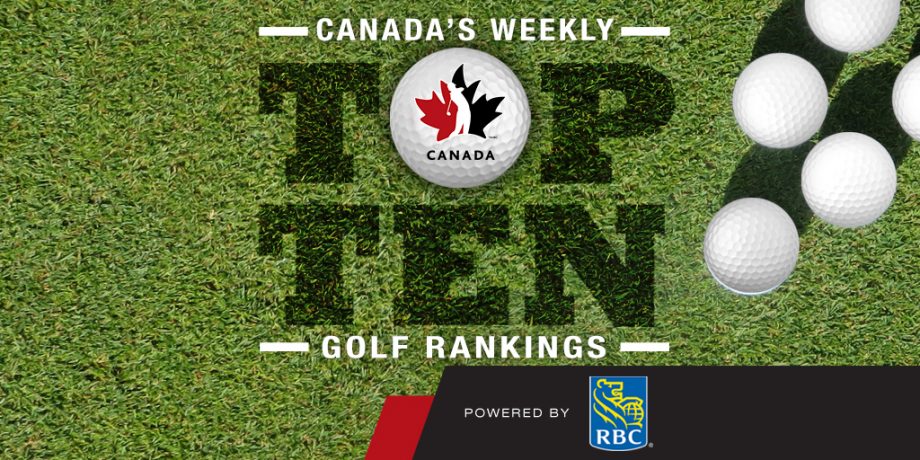 Josh Whalen made the biggest move among the Top 10, picking up 17 places in the world rankings to move past fellow Golf Canada National Team member Chris Crisologo and into No. 4 in the Canadian rankings.

Crisologo closed out the season at Simon Fraser University by finishing 11th at the Mustang International. It was the first tournament this year that the Golf Canada National Team member failed to record a top 10 result and just the second time that he finished outside the top 3.

No. 10 Matt Williams made the second biggest gain among the Top 10, picking up 13 spots in the world rankings after finishing in a tie for 19th at The Aggie Invitational. It was his third top 20 result of the season.

Biggest move: Noah Steele of Kingston, Ont., gained 453 spots in the world rankings after finishing in a tie for sixth at the Bearkat Invitational at Walden. It was his second top 10 result this season for the sophomore at Sam Houston State.

Maddie Szeryk moved up two places in the world rankings to within two spots of her career best after picking up her third career collegiate title at the Bruzzy Challenge. The Golf Canada National Team member opened with a tournament low round of 70 and never looked back, taking the wire-to-wire victory by four strokes. It was her sixth top-5 result this season and earned the Texas A&M senior SEC Golfer of the Week honours for the fourth time in her career. Szeryk is expected to get another boost in the rankings after winning her second straight event this past week. Those results won’t be factored into the weekly rankings until next week.

Fellow National Team member Naomi Ko jumped 24 spots after taking runner-up honours at the Bryan National Collegiate. It was the best finish of the season for the junior at NC State and the fifth top 10 of her career.

Vanessa Ha led the way among the Top 10, climbing 28 spots after finishing in a tie for 15th at the Wyoming Cowgirl Classic.

Biggest Move: Brooke Hill of Regina, Sask., climbed 296 spots in the world rankings after finishing in a tie for 24th at the Harvard Invitational.

Adam Hadwin climbs two places in the world rankings following a tie for 24th at the Masters, his best career finish at a major. The result was worth 5.30 world ranking points, the ninth straight event he has managed a points-paying finish, collecting points in every tournament he has played in this year. It also moves him up to a career-best No. 41 in the world.

Adam Svensson made the biggest gain among the Top 10 as the No. 7 ranked Canadian picked up 15 spots in the world ranking. Benjamin Silverman jumped seven spots while Roger Sloan gained five places.

Despite the fact every one of the Top 10 ranked players lost ground in the world rankings, it was not reflective of the results this past week.

No. 4 Brittany Marchand finished in a tie for 22nd at the Symetra Tour event in California. The result was worth 0.10 world ranking points for the Golf Canada Young Pro team member.