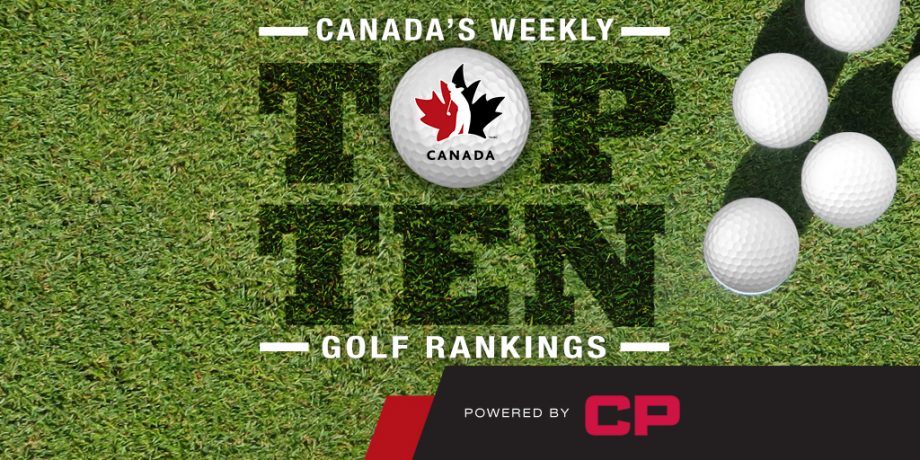 Minor gains among the Top 10 in what was a relatively quiet week as the collegiate golf season is set to tee off.

Golf Canada National Squad member Hugo Bernard climbed one spot up to No. 76 in the world rankings while fellow team member Joey Savoie led the way, picking up three places, up to No. 81 in the world. Bernard, Savoie and No. 3 Garrett Rank are all set to lead Canada in the upcoming Men’s World Amateur Team Championship.

Grace St-Germain led the way among the Top 10, picking up three places in the world rankings.

Despite slipping two places in the world rankings, Jaclyn Lee led the way for Team Canada at the 2018 World Amateur Team Championships, finishing fifth overall as the team itself rallied to finish seventh. Top ranked Maddie Szeryk finished tied for 46th while Naomi Ko was 72nd as the Canadian women paced the field at 17 under par over the final three rounds.

Top ranked Adam Hadwin moves up one spot in the world rankings after finishing in a tie for 21st at the PGA Dell Technologies Championship, the second of four FedEx Cup playoff events. The result was worth 4.63 world ranking points for the Abbotsford, B.C. golfer, who sits 47th in the FedEx Cup standings going into the third event. He needs to be inside the top 30 after the BMW Championship to advance to the TOUR Championship.

Adam Svensson moved past Corey Conners to take over the No. 7 ranking in Canada. Svensson finished tied for 63rd at the Web.com Tour’s DAP Championship while Conners missed the cut at the event.

Outside the Top 10, Richard Jung moved within striking distance of moving into the Top 10, gaining 412 spots in the world rankings after winning his first PGA TOUR Series-China title at the Suzhou Championship. The result was worth 6.00 world ranking points and vaulted the Korean-born Canadian from No. 18 all the way up to No. 11 in the Canadian rankings

Anne-Catherine Tanguay made the biggest move of the week, picking up 57 spots in the world rankings after finishing in a tie for 16th at the LPGA Cambia Portland Classic. It was her career-best result on the LPGA Tour and the 3.20 world ranking points are also the most she’s ever collected in her career. The result also moved the Golf Canada Young Pro squad member up to the No. 4 ranking in Canada

Fellow Young Pro member Brittany Marchand gained 24 spots in the world rankings after finishing in a tie for 16th in Portland. It’s her second best career result on the LPGA Tour and was worth 3.20 world ranking points. It also marked her first points-paying finish in the last four tournaments.