Under-19 & Under-17 Crowns Awarded in Edmundston 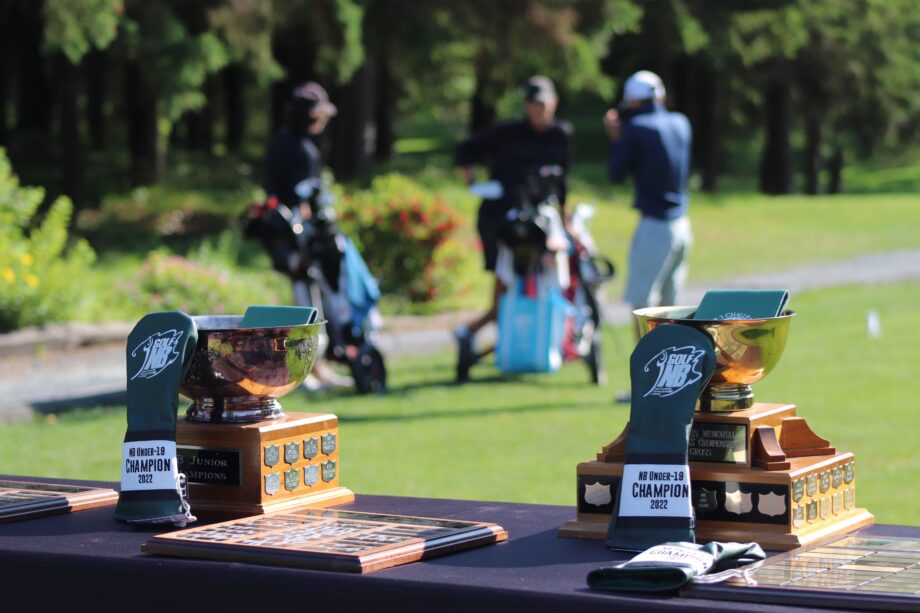 EDMUNDSTON, NB– After 54 holes, four championship titles would come down to the wire on Sunday. The Club de Golf Fraser Edmunston proved to be gracious hosts with a number of their dedicated members and staff volunteering their time to contribute to the success of this provincial championship. Players were greeted with hospitality and friendliness, along with an immaculately conditioned golf course that was set up to showcase championship golf in its truest form.

Under-19 Boy leaders took to the field at 9:20 AM, featuring a powerhouse group of Hampton’s Jacob Rockwood, Fox Creek’s Julien Babineau, and Gage’s, Noah Riggs. One shot divided Riggs from his competitors as they put a peg in the ground for Sunday’s final round.

Fox Creek’s Julien Babineau hit the ground running during Sunday’s final with an incredible 5-under par, 67 to close out the 54-hole event. His solid play moved him to a tournament total of even-par and a three-shot lead as he secured the 2022 NB Under-19 Boys title. Hampton’s Jacob Rockwood secured second place in the Under-19 Championship following his three-round total of 3-over, 222 (73,72,74). In place and capturing the final team spot was Gage’s Noah Riggs who finished at four-over-par for the event with (71,73,76).

In the Under-17 Boys Championship, Sunday’s round was the setting for an on-course shootout, as Riverside’s Tristan Frenette and Fox Creek’s Jacob LeBlanc entered the day separated by two strokes. Jacob LeBlanc would pull ahead during the final round after recording a stellar 5-under, 67 to end the event at 6-over, 222 total. Clubmate Miguel Babineau moved into second place after a final round of even-par, 72. Rounding out the top three in the Under-17 Championship was The Riverside’s Tristan Frenette, who finished at +16 for the championship (77,76,79).

The final round of the Under-19 and Under-17 Girls Championship would be a close-fought battle between Riverside clubmates Callie Taylor and Addison McClune. Joining the two in the final trio was Fox Creek’s Neve Miller.

Taylor would continue her fine run of form with a final round 77. Complimenting her first two rounds of 74 and 76, Taylor’s play would be enough to edge out the field by 8 strokes and capture both the Under-19 and Under-17 titles. McClune with a tournament total of 19-over, 235 secured second place after three steady rounds of (79,78,78). Joining the top 3 would be 2022 Under-15 Champion, Neve Miller of Fox Creek who recorded a final round 85, bringing her tournament total to 29 over-par, 245.

Joining Coach Bari Gourley and Manager Ryan Kingston in Niagra, Ontario in August will be Julien Babineau and Jacob Rockwood on the Junior Boys Team and Callie Taylor and Addison McClune on the Junior GirlsTeam.

2022 marks the return of Inter-Provincial Teams at National Golf Canada Events. The top three finishers and alternate in the Under-19 Girls and Under-19 Boys Tournaments have secured the opportunity to represent New Brunswick this summer.

The Junior Girls team consisting of Callie Taylor, Addison McClune, Neve Miller, and alternate Rachel Steeves will be joined by Coach, Bari Gourley at the 2022 Canadian Junior Girls Championship at The Marshes Golf Club in Ottawa, Ontario from July 26th-29th.

The Junior Boys team made up of Julien Babineau, Jacob Rockwood, Noah Riggs, and alternate Jacob LeBlanc will travel to Kamloops, British Columbia on August 8th-11th to compete at the Rivershore Golf Links with Coach, Louis Melanson.

For more information on the 2022 NB Under-19 Championships, including results and tee times, please CLICK HERE.