Under-13 & Under-15 Champions Crowned at Hampton 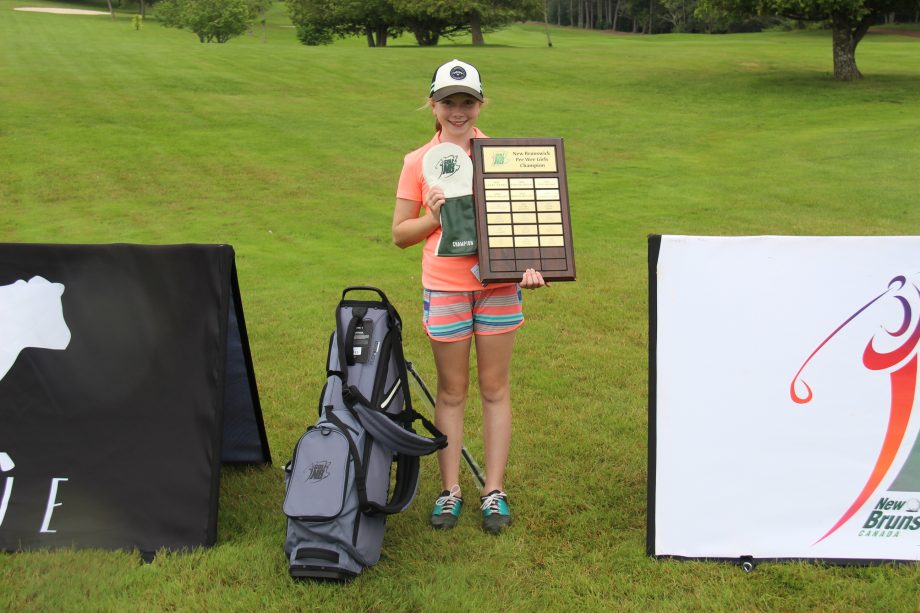 HAMPTON, NB– Many players took to the course on Sunday with the goal of out-performing their first-round results. However, the temptation of risk and reward, paired with firm and fast greens would set the tone for a challenging moving day at the NB Under-19 Championships.

The Under-19 field led the way during Round 2 as the Under-15 and Under-13 leaders would anchor the draw as they take in all the glory that comes with their Championship Sunday.

Leading the charge in the hunt for Under-15 Boys Championship crown was Westfield’s Tyler Graham. After an opening round, 13-over, 85, Graham turned his play around on Sunday with a steady 6-over, 78, which was enough to secure a victory in the Under-15 Boys Championship by four strokes. In second place, Truro Golf Club’s Elliot Mullen, who’s two day total of 23-over, 167 left him with a two shot cushion ahead of his competition. In a two-way tie for third are Westfield’s Morgan Costain and Petitcodiac’s Chase Burgess who both fired second round, 14-over, 86s on their way to tournament totals of 25-over, 169.

Ken-Wo’s Kooper MacKay captured the Under-13 Boys title after rounds of 8-over, 80, and a stellar second-round score of 2-over, 74. MacKay is joined at the top of the leaderboard by Moncton’s Carter Lavigne who finished 10 shots behind first, and Abercrombie’s Grady Cohen who secured third with a final score of 25-over, 169, (86,83).

It was Abercrombie’s Avery Cohen who captured the Under-15 Girls crown after a Sunday final round of 12-over, 84, bringing her two-day total to 22-over par. Finishing in second place was Rachel Steeves of the Sussex Golf & Curling Club at 27-over, followed by Fox Creek’s Neve Miller who finished the event in third place.

In the Under-13 Girls Championship, Daphne Taylor of the Riverside Country Club battled the difficult conditions at Hampton over two days to finish her first competitive event off in style and improving on her first-round score by 13 shots.

Continuing his fine run of play from round 1 was Truro Golf Club’s and Canada National Junior Team member, Owen Mullen. Mullen leads the Boys Under-19 field after his second-round 2-under, 70. Three shots back of the Nova Scotian is Hampton’s very own, Nicholas Ritchie. Ritchie sits in solo second place at a two-round total of even-par (74,70). Completing the hat-trick for second-round 2-under, 70 cards is Miramichi’s Devon Gionet. The talented junior followed up his opening round 76, with a stellar 2-under, 70 to punch his ticket into Monday’s final pairing for the Under-19 Boys.

Things are tight at the top of the Under-17 Championship leaderboard as Truro’s Simon Mullen and Nicholas Colton of Gowan Brae both share the lead heading into Monday’s final round at 13-over. Joining them in the final pairing is Ben Nicholson of the Fredericton Golf Club who sits three shots behind at 16-over.

In the girls Under-19 Championship, Callie Taylor of the Riverside Country Club heads into Monday’s final round with a one-shot lead over Royal Oaks’ Mackenzie Deveau. Sussex’s Rachel Steeves rounds out the top three at 27-over par.

Similar names scatter the Under-17 Girls Leaderboard, Taylor secures her pole position heading into Monday at 20-over par. Following after is Rachel Steeves, 7 shots back, and Riverside’s Addison McClune slides into third place at 29-over.