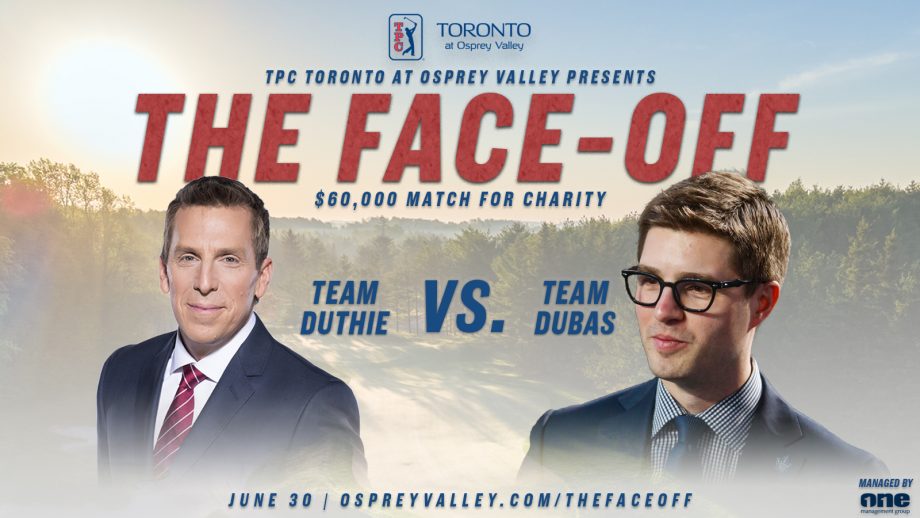 <![CDATA[<strong>Caledon, Ont. – TPC Toronto at Osprey Valley announced on Wednesday the creation of The Face-off, a new one-day celebrity competition on June 30 between teams captained by TSN host James Duthie and Toronto Maple Leafs GM Kyle Dubas, with $60,000 in donations to local charities on the line. Managed by and in collaboration with One Eleven Management Group, The Face-off will see Team Duthie and Team Dubas compete against one another in an 18-hole match on TPC Toronto at Osprey Valley’s Hoot course, with each team member competing on behalf of selected charities. The match will be covered live on social media and captured for a feature-length video to be shared shortly after the competition. A total of $60,000 will be donated to charitable organizations of each player’s choosing, adding to the $350,000 in donations already announced by TPC Toronto at Osprey Valley and the Humeniuk Foundation towards COVID-19 relief efforts and community services this spring. “This opportunity to raise support and awareness for important local causes and play a fantastic golf course with James is going to be a ton of fun,” said Dubas. “I’m happy to be a part of this event and look forward to some laughs, hopefully some good golf and a memorable day on the course.” “I’m used to putting Kyle in the hot seat with questions about the Maple Leafs, but now I’m looking forward to putting the heat to him and his teammate on the course,” said Duthie. “To have a chance to do this on the Hoot course at TPC Toronto while raising some awareness and for some great organizations makes it even more special.” An initial donation of $10,000 will be made to each of the four charities selected by event participants. Following the 18-hole match between teams, which will consist of six holes of net best-ball, six holes of alternate shot and six holes of scramble, the winning team will earn an additional $5,000 donation. Four on-course competitions worth $2,500 will also be on the line for each player. Dubas will be competing on behalf of the You Can Play Project, which works to ensure the safety and inclusion of all LGBTQ+ people in sports, including athletes, coaches, staff and fans. Duthie will be competing for The Frontline Fund, which represents Canadian hospital foundations dealing with COVID-19 all across the country and helps to meet the highest-priority needs of hospitals across Canada, including urgent measures to combat COVID-19, as well as to support the Northern communities and Indigenous health. Teammates selected were TSN personality Jeff O’Neill and Canadian comedian and actor Gerry Dee. O’Neill will compete alongside Duthie, while Dee, the star of the hit series Mr. D and CBC’s Family Feud Canada, will team up with Dubas. O’Neill will compete for the Down Syndrome Association of York Region, which promotes inclusiveness and awareness for children with Down Syndrome, while Dee will play for KidSport Ontario, a Canadian non-profit organization. For more information on The Face-off, visit ospreyvalley.com/thefaceoff.]]>