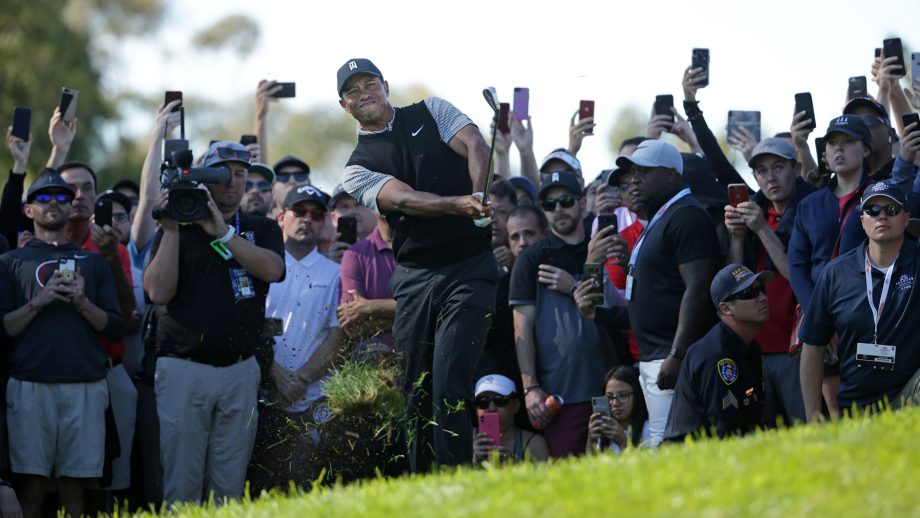 SAN DIEGO, CALIFORNIA - JANUARY 25: Tiger Woods plays his shot out of the rough on the North Course during the second round of the the 2019 Farmers Insurance Open at Torrey Pines Golf Course on January 25, 2019 in San Diego, California. (Photo by Jeff Gross/Getty Images)

Ben Silverman didn’t have to look up his pairings for the fourth round of the Farmers Insurance Open last Sunday. His phone began vibrating as soon as they were announced.

Silverman was paired with golfing great Tiger Woods for the final round of the PGA Tour event in a trio with Scott Stallings. Silverman, from Thornhill, Ont., was inundated with texts from friends and family thrilled that he would be playing alongside the legendary Woods for the first time in his career.

“I had about 20 or 30 messages within about two hours of the tee times being released,” said Silverman. “Everybody already knew. My wife gets the text messages directly from the PGA Tour so she knew right away.”

There are pros and cons to playing a round of golf with Woods. It was exciting to watch the 14-time major winner up close, but the massive gallery that trails Woods from hole to hole can be a distraction.

Silverman shot a 3-over 75 on Sunday to finish the tournament tied for 62nd at 2 under. Woods (67) moved 28 spots up the leaderboard in the final round to tie for 20th at 10 under and Stallings (72) tied for 43rd at 5 under. Justin Rose won the event by two strokes, firing a 21-under par overall.

The key thing Silverman took away from the experience was the way Woods exudes confidence.

“That changed my perspective a little bit because he’s trying to win every single shot he’s playing. I thought it was pretty cool to see and witness first hand and that’s the kind of attitude that helps you win 80 golf tournaments.”

Mackenzie Hughes of Dundas, Ont., played with Woods in Saturday’s third round. It was Hughes’s second time playing with Woods, as they had been paired with each other for the 2018 Players Championship.

That previous experience helped Hughes feel more comfortable playing alongside Woods, but he agrees with Silverman that there’s nothing quite like it.

“You definitely can feel that energy and that confidence,” said Hughes, who finished the Farmers Insurance Open tied for 29th at 8 under. “He carries himself like a guy who’s won a lot and knows how to do it.

An unexpected perk for Silverman was the handful of security guards that keep a watchful eye over Woods. Although protecting Woods was their duty, they would also help clear out crowds if Stallings’ or Silverman’s shots went off line. At one point Silverman needed a bathroom break and the security detail was right there to guide him through the massive crowd.

As beneficial as that personal entourage was, it’s Woods’s strong psychology that’s going to stick with Silverman.

“I think I’m just going to remember those mental lessons I took away from playing with Tiger and take that attitude into the tournament,” said Silverman. “I played the Monday qualifier for the Phoenix Open with that attitude and it was definitely a much different way to approach shots and the course and I liked it a lot.”

Silverman did not quality for the Waste Management Phoenix Open and will next play at the AT&T Pebble Beach Pro-Am in California.

Hughes will be joined at the event in Phoenix by fellow Canadians David Hearn of Brantford, Ont., Blair Hamilton of Burlington, Ont., as well as Nick Taylor and Adam Hadwin of Abbotsford, B.C.

“If I can just drive it a little bit better, I mean I’m driving it pretty well, but if I can find just a few more fairways, that’s going to add up better scores,” said Hughes. “I’m feeling good about my prep and how my game is progressing. It should be a pretty good week, I like the course a lot.”