The Baker Sisters, Ives and Arsenault Hold to Their Leads to Win NB Provincial Golf Titles 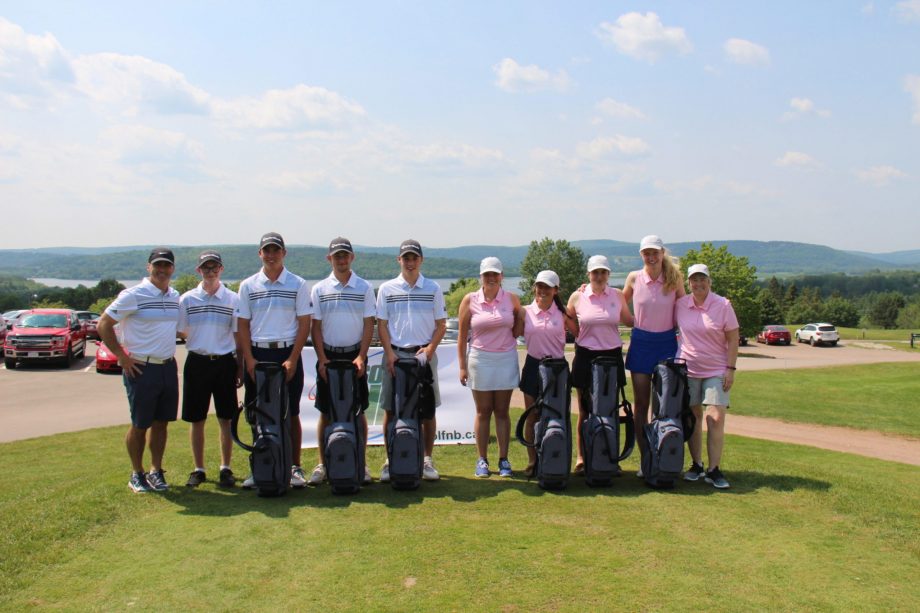 The sun came out and the day got a little warm for the 58 players in the final round of the NB Junior Championships. The last day saw the front-runners from Day 2 hold on to their leads to become NB Champions in their respective divisions. Haley Baker and her sister Abby who represent the Ashburn Golf Club in Nova Scotia swept all 4 girls titles. Haley started the day with a 5-shot lead over younger sister, Abby, and an 8-shot lead over Julie Gauvin from Fox Creek Golf Club. Haley had a great front nine with birdies on holes #4 and #6 and a bogey sandwiched in there for a 1-under par 36. Abby managed a birdie on hole #6 but had three bogeys and a double to make the turn with a 41. The Baker girls then seemed to switch their front-nine play as Haley had 6 bogeys and shot 41 for a 77 and a 3-day total of 235. Abby wasn’t pleased with her front nine and turned on the back burners.  With 2 birdies and 3 bogeys on the back nine she fired a 1-over par 36 and made up those 5 shots on her sister to also finish with a 77 and a 240 total.  Haley defended her title as NB Junior Girl’s Champion and Abby captured both the Girl’s Bantam and Juvenile Divisions. Mackenzie Scott who plays out of Kingswood also shot a 77 on the day and moved up to 3rd place followed by Sarah Holt, who has been fighting a fever all tournament, who shot an 83. 1st Low Net honours for the Girl’s Division goes to Alexandra Guitard, who shot a three day low net of -16, 200.

The NB Junior and Juvenile Boys titles were fought for all round as the leaderboard was bunched up all 18 with 4 boys (Pierre Luc Arsenault, Nick Ritchie, Felix Boucher, Daniel Kirby) all fighting to come out on top. Pierre-Luc Arsenault who plays out of Le Club de Golf St-Ignace held on at the end of the day to win both the Junior and Juvenile titles with a wire-to-finish. Arsenault started out hot with a birdie on the 1st hole but it was matched by Felix Boucher of Fox Creek Golf Club, while Ritchie from the host club, (Hampton) had a par. Arsenault then bogeyed holes #2 and #3 while Boucher and Ritchie had pars and just like that, there were three tied for the lead! It stayed tied until Ritchie fell one back on the 5th hole and then Boucher bogeyed the par 6, hole #6 to give Arsenault a 1-shot lead again after 6. Arsenault parred the rest of the holes on the front but both Boucher and Ritchie bogeyed #8 and # 9 to give Arsenault some breathing room with a 2-shot lead over Ritchie and a 4-shot lead over Boucher. On the back nine Ritchie had 4 bogeys with his 6 pars to fall back a little with a 231 total when finished.  Boucher righted the ship and scored 7 straight pars, to apply some pressure to Arsenault who had 4 bogeys on the back nine on holes #12, #13, #16 and # 17.  Boucher also bogeyed the 17th hole which made the boys tied with one hole left. Arsenault sealed the deal with a birdie on the final hole of the tournament to shoot a 76 and a 3-day total of 227 in front of the nice-size gallery. Boucher managed a par on that hole and finished one shot back after his 75 gave him a 228 total. It was an exciting finish for both players and Arsenault got to lift two trophies after the round.

In the Boys Bantam Division, Nova Scotia native Gavin Ives, of the Ashburn Golf Club, led wire-to-wire and finished with a total of 247 after shooting scores of 84, 80, and 83. Ives has had a successful two weeks as he won the East Coast Bantam Boys’ title last week at Covered Bridge Golf & Country Club. Next week, he will play in his home province to try to win their Bantam title there. Good luck Gavin and thanks for bringing your play to NB. Claiming the runner-up position was Gowan Brae’s Golf & Country Club’s Nicholas Colton who shot consistent scores of 88, 88, 89 to finish 18 shots back of Ives. The Low net division winner was Jacob Rockwood of the home club Hampton Golf Club with a three-day net total of 9, 225.

The day doesn’t end there as this tournament acts as the qualifier of the Canadian Junior Championships where 3 boys and 3 girls (as well as an alternate for each team) will represent New Brunswick at those championships. There was a tie for the last team spot and the alternate position between Nick Ritchie and Daniel Kirby who both finished the day with a 3-day total score of 231. Kirby, who represents JH Sports in Fredericton, struggled a bit on the front nine but was only 1-over par on a stretch of ten holes and found himself in the mix for a team position. Kirby had a 1-shot lead going into the last hole but had bogeyed the final hole to meet Ritchie in a playoff for the last team spot. In a sudden-victory playoff, the boys headed to the first hole where Kirby had a birdie to Ritchie’s par to win the team spot and Ritchie being named alternate. The team of Pierre Luc Arsenault, Felix Boucher, Daniel Kirby, alternate Nick Ritchie and Coach Louis Melanson will travel to Covered Bridge Golf & Country Club in Hartland to represent Team NB in the Canadian Junior Boys Championship August 12-15th.

The girls named to Team NB and who will compete at the Canadian Junior Girls Championship are Mackenzie Scott of Kingswood, Sarah Holt of the Gage Golf & Curling Club, Julie Gauvin of Fox Creek Golf Club and alternate Alexandra Guitard of Royal Oaks. The team along with Coach Bari Gourley will head to the Lethbridge Country Club in Lethbridge, Alberta July 30 to August 2.

It was an exciting three days at the Hampton Golf Club where 8 Pee Wee and Junior titles were won. The course is in great shape, the club staff is excellent to work with, the many volunteers were amazing and the players were extraordinary!