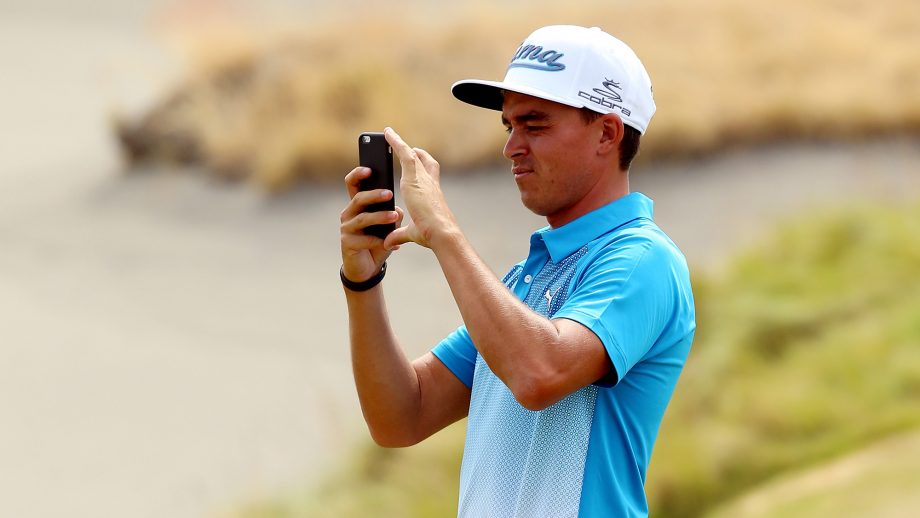 UNIVERSITY PLACE, WA - JUNE 15: Rickie Fowler of the United States uses his mobile phone during a practice round prior to the start of the 115th U.S. Open Championship at Chambers Bay on June 15, 2015 in University Place, Washington. (Photo by Andrew Redington/Getty Images)

If asked the question “How has technology impacted your game?”, most golfers automatically think of their adjustable driver, game-improvement irons, a ball that promises both distance and accuracy, foul-weather gear and footwear that protect them from the elements and, perhaps, a distance-measuring device that takes the guesswork out of approach shots or an electric trolley that saves wear and tear on their bodies during a round.

But we got some revealing and unexpected answers when we ask experts from various sectors of the Canadian golf industry what technology they thought was most impactful on golfers.

“The smartphone!” responded Craig Loughry, Golf Canada’s director of handicap and course rating. You need only to look at the home screen on his phone for evidence. It’s plastered with the icons for multiple golf apps. Among GPS apps, he says Golfshot seems to be the most popular, but he’s enthusiastic about others, FunGolf in particular. Tracking your game stats has become simple, again thanks to various apps.

“Remember tracking fairways hit, greens in regulation and putts per hole? Well, that’s evolved,” said Loughry. “Used properly, these apps can actually show you what areas you need to focus on to improve your game.” There are lots of these apps available, both free and subscription-based, including the one developed by Golf Canada.

More exotic is “real-time game tracker” technology that fits on your club. “It records and tells you your swing speed, specific distance of each club, tracks your tendencies of misses, tracks your position on the course—all shot by shot, including your putts. It’s really amazing technology.” A couple of examples are Arccos and Game Golf.

Liam Mucklow is the founder of the Golf Lab, based in King City, Ont., so naturally he points to things such as launch monitors, 3D motion capture and force plates as advances that have improved the ability of instructors to help golfers become better through not only teaching but club fitting as well. “These three pieces of equipment allow me, as a coach, to measure the complete feedback loop from ball flight, club delivery, body movement, and ground reaction forces. In short, it helps me make golfers better faster than ever before.”

Among others interviewed for this story, Mucklow suggested high-tech “entertainment ranges” such as Drive Shack and TopGolf will encourage more people to try the real thing. A recent report by the U.S. National Golf Foundation confirmed that.

The folks who run the real courses where you play are also proactive to ensure they are delivering the best experience possible from communicating through social media and email to organizing and running events.

“As the golf industry changes, so changes the role of the PGA of Canada professional,” notes Adam Tobin, director of golf at Whistle Bear Golf Club in Cambridge, Ont. “For example, I’ve noticed the increase in tournament operation software that allow for easy one-stop development of tournaments, events, leagues, and every aspect that comes along with them. But the main item that has progressed is the way we communicate with our members on a regular basis. Many clubs are employing full-time communication managers and in my opinion, it is one of the most important roles at a club.”

David Main, a PGA of Canada member and a club manager, can see the question from both perspectives. He cites data management as a major advancement that impacts the customer experience positively. While this technology is largely invisible to the customer, Main said it allows clubs to better shape their service performance on an ongoing basis.

As well, he says, “I see more clubs automating the guest experience in the future. Why have someone checking you in when you can tap your membership or pre-paid guest card and get access to golf? Why have servers when you can select menu items from a tablet and pick them up at a window or have a food runner deliver it? Why can’t I scan my fingerprint to get access to my club storage, use my member or pre-paid card to access a power cart? How about facial recognition software for security and tracking member usage?

“Stuff you thought was only in the movies will soon be part of the club world.”

That’s tomorrow and beyond. But today, the most important and yet largely overlooked impact of technology is evident when you step onto the first tee and survey the opening hole. Course architects routinely employ computer software to design and redesign holes and entire layouts.

“New computer technologies that create vivid photo visualization and 3D modeling of proposed redesign plans are invaluable,” says Toronto-based course architect Jeff Mingay. “These present club members, some of whom may have trouble interpreting traditional two-dimensional overview plans of a hole, with a real-life view of the proposed changes.”

Mingay, who is also integrally involved with the construction and grow-in of his projects, cites new strains of bentgrass discovered through modern research techniques as a major development. “Superintendents are better able to present more consistently smooth, fast putting surfaces that are healthier and can better handle drought, traffic, harsh winter conditions and other stresses than annual bluegrass.”

Kathryn Wood, chief operating officer of the Canadian Golf Superintendents Association, reached out to her Twitter followers for answers to our original question. Thanks to the many who responded! (You can learn more from this recent USGA article)

“For the most part, I’m pretty sure most golfers don’t have even the foggiest idea of how technology is driving golf,” tweeted Brad Hutchinson, course superintendent at Ontario’s Warkworth Golf Club. “And almost every time I start to explain it, they get this glazed look like they’re thinking about putting.”

Now focus! These turf professionals make every effort to make your round the best it can be.

So the next time someone tells you that golf is stuck in the Dark Ages, recite some of the above. Until, that is, their eyes glaze over.