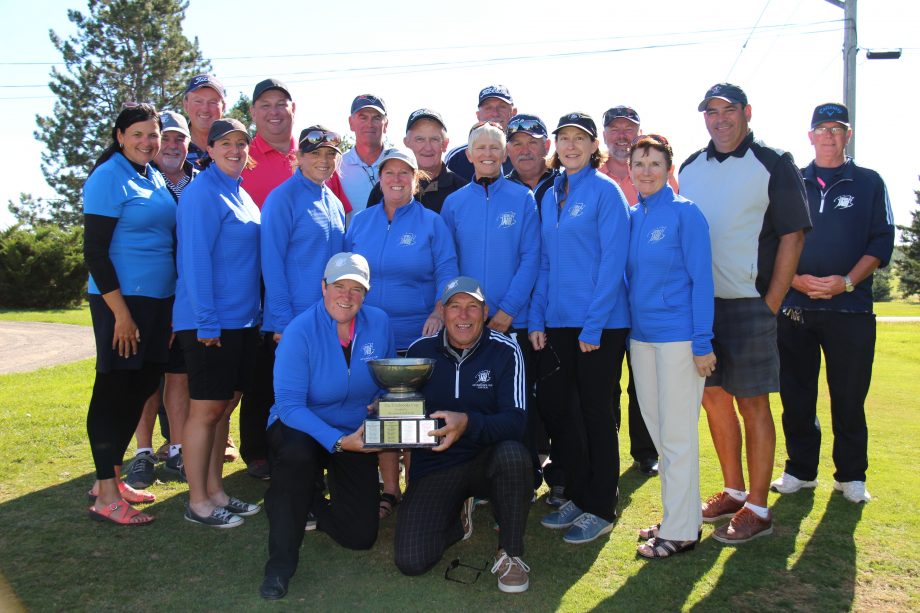 The Estabrooks Cup always begins on the Friday eve of the tournament with a finger-food reception, the introductions of the North and South Teams and the pairing for the first round Four Ball Matches of the tournament. This year for the first-time entertainment was provided by player Gerry Duguay who sang and played guitar for the teams and everyone enjoyed it.

With winds gusting to 70 km/h throughout the night before the Estabrooks Cup, everyone was hoping for a calm. The morning brought sunny skies and a swirling wind but nothing these great players couldn’t handle! The 36 participants of the 2018 Estabrooks Cup would be challenged on two courses this year at the Pine Needles Golf & Country Club. The River course would be played for the 1st round of the Fourball matches and the 3rd round of the Singles Matches. The Pine would host the 2nd round Foursome (Alternate shot) Matches for the 21st running of the Estabrooks Cup.

As the day would heat up, so would the matches and at day’s end it was playing captain Allison Chisholm from The Riverside Country Club and non-playing captain Pine Needles Golf & Country Club own Louis Boudreau’s Southern squad that would take 12 points. The North Team captained by Paula Napke-Flanagan from the Miramichi Golf Club and Wilf Pilgrim of Kingswood would manage 6 points on the day but with 18 points available Sunday in the Singles Matches the North says the tournament isn’t over yet.

Day one would see players compete in two sets of 18-hole matches with the morning draw consisting of Fourball play and the afternoon draw being played in a Foursome, or alternate shot, format.

The day’s first match would see the Miramichi Golf Club Karen Flett and Fredericton Golf Club’s Garry Jenkins come out the victors against Pine Needles’ own Doreen Vienneau and Maplewood’s Bob Gray. In Match # 2 the South would match that point when the next group of Jamie Melanson from Fox Creek Golf Club and Greg Doucette of Country Meadows took down the Restigouche Golf Club duo of Alex Doucet and Gerry Duguay. Match #3 saw the South carry on with 2018 NB Ladies Mid-Amateur and Senior Champion, Leanne Richardson GM of Country Meadows and partner Mike Breen of Hampton win 3 & 2 Over the Fredericton duo of Mary Walton-Rossignol and Eric Hildebrand.  The North Team got back on the board when the Fredericton pair of Maureen O’Donnell and Nathan Harvey outdid Andrea Boucher of Moncton Golf Club and Stu Musgrave representing Country Meadows 1 up.

So, with the score tied at 2-2, the South decided to apply a little pressure and won the next four points. Match # 5 Sandy Comeau (Country Meadows Golf Club) and Kevin Farmer (Herring Cove) won 5 & 4 over the North Team of Kathy Grebenc (Gowan Brae Golf Club) and Captain Wilf Pilgrim. Match # 6 Pam Cossey (Rockwood Park Golf Club) and partner Guy MacKnight (Country Meadows) squeaked out a 1 up win over Fredericton Golf Club member, Penny Dickeson and Restigouche Golf Club’s Shane Wellman. Match # 7 had Shelly Thomas (Country Meadows) and John Leblanc (Fox Creek Golf Club) better the North with a score of 4 & 3 over Angela Welch (Woodstock) and Gary Melanson (Covered Bridge). Match # 8 of the run from the South Team came from Captain Allison Chisholm and Mark Armstrong both from The Riverside Country Club win 3 & 2 over Brenda Parrot (Gowan Brae) and Sonny Phillips (Fredericton). The North got back on the board for Match #8 when Captain Paula Napke-Flanagan took rookie Corey McMinniman under her wing and were victorious over Erin Musgrave (Country Meadows) and partner Mike Hosford (Royal Oaks). By the end of the Four Ball Matches, the South had a lead of 6 points to 3 points over the North.

By the afternoon matches the weather had warmed up and the players played their Foursome Matches (Alternate Shot) on the shorter Pine Course. The South decided they wanted control of these matches early so Match #11 featuring Mike Hosford and John Leblanc was finished after the 15th hole with a 4 & 3 defeat over Garry Jenkins and Wilf Pilgrim. Match #12 was also a 4 & 3 win after Pam Cossey and Erin Musgrave handled the group of Mary Walton-Rossignol and Karen Flett. Then in Match # 13 the South Team of Andrea Boucher and Sandy Comeau ended that match early with a 7 & 6 trouncing of North’s Maureen O’Donnell and Angela Welch. The North would get back on the board when Match # 16 would see Kathy Grebenc and Penny Dickeson handle Allison Chisholm and Doreen Vienneau of the South Team. The North stole another point when Eric Hildebrand and Shane Wellman beat Guy MacKnight and Mark Armstrong on the 18th hole. Match # 10 went all the way to the 18th hole and they still couldn’t name a winner, so the match was halved between North’s Gerry Duguay and Alex Doucet and the South’s Bob Gray and Greg Doucette. South put down the accelerator again in Match # 17 when Country Meadow’s duo of Shelley Thomas and Leanne Richardson ended their match after 13 with a 6 & 5 hammering over Paula Napke -Flanagan and Brenda Parrot of the North. Kevin Farmer and Mike Breen won by 1 up after the 18th hole defeating Sonny Phillips and Gary Melanson Match #15. Match # 18, the last match of the day couldn’t be decided either after 18 holes giving each team of youngsters Corey McMinniman and Nathan Harvey and the South Stu Musgrave and Jamie Melanson a half point each.

The Foursome Matches ended the same as the Four Ball Matches with 6 points for the South and 3 points for the North. This means that entering Sunday’s singles matches Team South holds a 12 point to 6-point lead over Team North, but with 18 points up for grabs in singles play it is still anyone’s game.  The South need 6.5 points on Sunday to win the cup compared to 12.5 points needed for the North to win.  After a delicious turkey dinner and carrot cake dinner made by the Pine Needle’s Boudreau family and staff, the pairings for Sunday’s Singles Matches were made. Gerry Duguay provided musical entertainment for the second evening and everyone hopes he makes the North Team in 2019 so he can entertain again next year.

Day number 2 of the 2018 Estabrooks Cup started with a frost delay of one hour putting the tee times from an 8:00 start to a 9:00 start. It was a chilly start to the day, but the sun was out (as well as mosquitos in late September) and it warmed up nicely. The North new they needed to get an early jump on the day to chip into the South’s lead, but Mike Hosford of the South put a damper on that quickly when he beat Gerry Duguay after 14 holes to increase the lead in Match # 20. Alex Doucet got the North on the board with his win after 14 holes also over veteran Bob Gray to tie the day’s scores. Andrea Boucher won a point for the South in Match # 25 over Brenda Parrott. Match # 29 had the biggest thrashing of the tournament when North’s Team Captain Paula Napke-Flanagan wanted to rally her team and won 8 & 7 against friend Shelley Thomas. Napke-Flanagan had 5 birdies on the first twelve holes. Like Thomas said, “It is hard to win a hole with a par when your opponent keeps having birdies.” So, despite what the score of the match shows, Thomas was playing well too.

The next 2 matches went to the South when Pam Cossey defeated Mary Walton-Rossignol 3 & 2 (Match # 22) and Mark Armstrong beat Shane Wellman 4 &3 in Match #28 taking the overall score to 16 points to 8 points. Penny Dickeson wasn’t giving up on a North’s comeback as she handled Doreen Vienneau after 13 holes in Match # 31. Her clubmate and teammate on the north, Eric Hildebrand then beat Kevin Farmer for another North point and closing the lead to 16-10. The best story of the day came from this group as Kevin Farmer told the story of hole # 17. “I played the hole well as I reached the par 5 in two and had a chance for eagle but settled for a birdie. Eric hit his drive far into the woods and we find it out in the fairway, quite a kick, then he puts his next shot over the green and then decides to chip in for an eagle! My birdie didn’t look so good then!”. Veteran John LeBlanc bested Wilf Pilgrim on the 18th hole next followed by a 1 up win by Guy MacKnight over Gerry Jenkins. This put the overall score to 18-10 with the South just needing a half or a win to win the trophy again. The win came from Match 33 with celebrated golfer Leanne Richardson and her 5 & 4 win against Maureen O’Donnell to put the score at 19 points to 10 points for the Estabrooks Cup win. The other matches finished out to make it a full total. Those matches included a North win by Angela Welch over Erin Musgrave in Match # 26. Captain Allison Chisholm winning another point for her South Team after taking down Kathy Grebenc 4 & 3. The first halve of the day would come from the pairing of Gary Melanson and Greg Doucette in Match # 27. Then North won a couple of points in Matches #30 and # 32 from Karen Flett over Sandy Comeau 1 up and Sonny Phillips over Mike Breen 2 up. Match # 36 had Corey McMinniman defeat Jamie Melanson 3 & 2 and the final match to come in was # 35 that was halved between the North’s Nathan Harvey and the South’s Stu Musgrave.

The South Team won the 21st playing of the Estabrooks Cup with a final score of 21 points to 15 points and to take the trophy home again this year.

For more information on the 2018 Estabrooks Cup, please visit www.golfnb.ca or CLICK HERE.