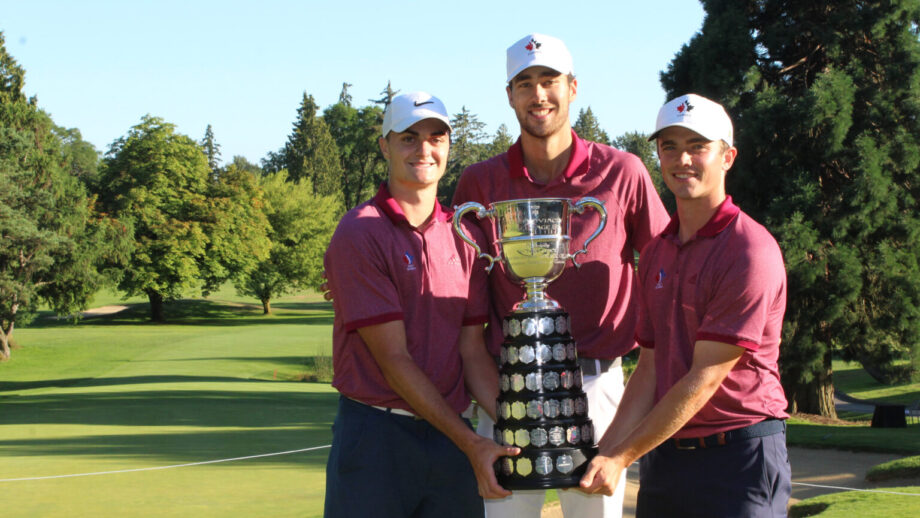 Team Québec charged ahead to win the inter-provincial competition in a seven-stroke victory over the host squad, Team British Columbia. Laurent Desmarchais, Christopher Vandette, and William Forgues shot a collective 3 under to become the ninth team from Québec to secure the title since the Willingdon Cup became an annual competition in 1927. Reigning champions Team Ontario rounded out the top-3 at 6 over par.

In the individual competition, American Elijah Turner rose nine spots on the leaderboard to lead the pack during Tuesday’s second round at the Canadian Men’s Amateur Championship, presented by BDO. The 23-year-old from Highland, Utah limited himself to two bogeys at Seymour Golf and Country Club, carding four birdies and an eagle on his final hole, the 9th hole, to set himself up well at the halfway point of the tournament.

“My caddie is a local member at Seymour and he was great at helping me manage around the course,” said Turner of his round today at Seymour Golf and Country Club. “It was important for me to hit fairways and stay out of trouble as much as possible. I had a nice run with 3 birdies in a row that were set up with good drives off the tee. I think I’m a good driver of the ball and that strength certainly helped me today. Seymour’s greens were very demanding today with tough pin placements. It took a lot of patience out there today on those greens. Both courses are just excellent,” he added.

Following closely, 22-year-old, Michael Haranhan Smith shot a 66 today finishing one shot back at -5. Haranhan Smith is one of a trio of Australians competing this week, with all three advancing to the third round.

“I think this course is definitely the one to score on, the back 9 can be tricky but you can definitely get it going on the front,” said Haranhan Smith of this round at Point Grey Golf and Country Club. “I’m a relatively good iron player which suits this golf course and the greens are pretty large but you need to be in the right section to give yourself a chance at holing some putts.”

The winner of the championship will earn an exemption into the 2023 RBC Canadian Open at Oakdale Golf & Country Club, as well as the 2022 U.S. Amateur Championship being contested August 15-22 in Paramus, N.J.

The third round commences tomorrow at 8:00 a.m. PT at Point Grey Golf and Country Club.