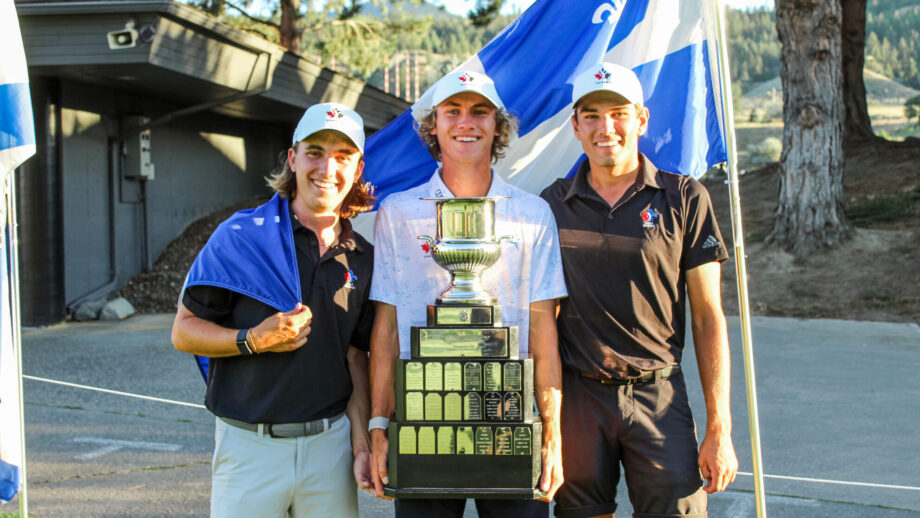 It was another scorching day in Kamloops as the Canadian Junior Boys Championship, presented by BDO brought the heat to Rivershore Estates and Golf Links while wrapping up the second day of play.

The 36-hole inter-provincial competition came to a close as Team Québec, consisting of Jean-Philippe Parr, Felix Bouchard, and James Newton, extended their day one lead to capture the title by six strokes. Hot on their heels was Team Ontario who challenged throughout the afternoon but fell short of closing the gap that Team Québec laid out yesterday.

Team Québec was boosted by an impressive showing from Team Canada National Squad member Jean-Philippe Parr. In the individual competition, the 18-year-old battled lofty temperatures and recorded eight birdies and an eagle to edge a one-stroke lead over teammate James Newton at 12-under after 36 holes. The round also ties the low Canadian Junior Boys Championship single-round scoring record set by Calvin Ross in 2017 and matched by Chris Vandette in 2019.

“I just did everything really solid today,” said JP. “Got off to a hot start and then just kept it in the fairway which gave me good chances to attack the pins, and then just putted really nicely and made some really good birdie putts. Overall just really solid golf overall!”

Heading into round three, Parr looks to stay consistent.

“Heading into tomorrow, just trying to keep the same gameplan and keep making birdies since there are so many birdies out there,” he added. “Also just going to try to be patient and most importantly have some fun.”

James Newton, 11-under for the tournament, is also a member of Team Canada National Junior Squad. The 18-year-old fired a 2-under-par 70 during today’s round and plays out of Royal Ottawa Golf Club in Gatineau, Qué.

Closely following and tying for the third spot on the leaderboard were Cooper Humphreys (Vernon, B.C.) and Matthew Javier (North York, Ont.). Fifteen-year-old Javier also occupies the lead in the 16-and-under Juvenile Division. Andre Zhu sits second and one stroke off the lead.

Round three is set to commence tomorrow at 8:00 a.m. PT