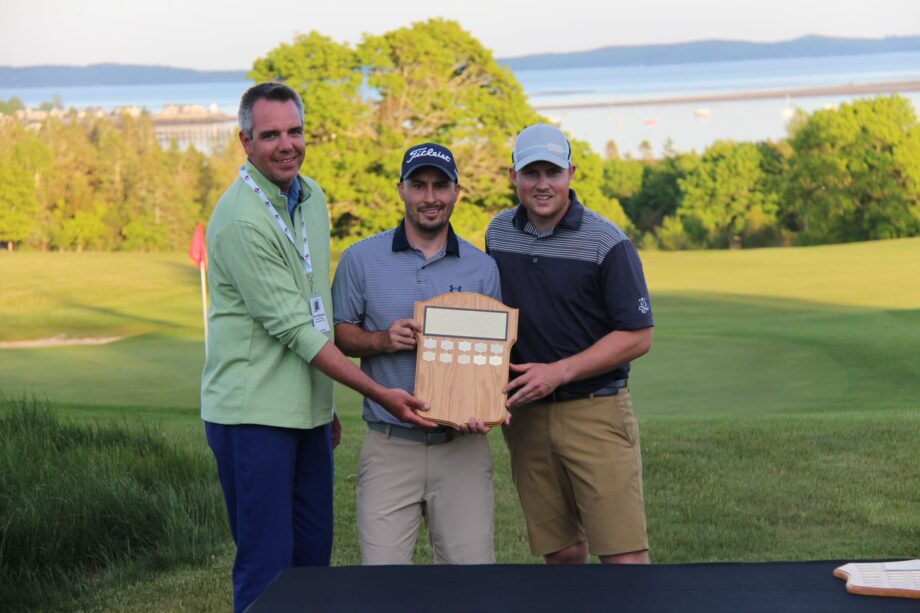 Sunday brought sunny and warm conditions to entice the field at the NB Men’s Four Ball Championships presented by TaylorMade, the first event of the 2022 Golf NB Championship Schedule.

In the Senior Men`s Division, the team of Bob Brown and Tony MacKinnon of the West Hills Golf Club would complete their wire-to-wire win shooting a score of five under par (-5) on day 1, and a six under par (-6) on day 2 ending with a commanding five-shot lead over runner-ups Shawn Branch and Greg Jones of the Country Meadows Golf Club. Brown and MacKinnon would combine for a two-day total of 1 eagle, 10 birdies, and only 1 bogey.

In the Senior Net Division, it was Tim Sanford and Gary Snider who would be crowned. Sanford and Snider would card a net eight under par (-8), 64, on both days giving them a net total of sixteen under par (-16), 128. The team would card an impressive net score of 29 (-7), during their second day back nine, giving them a one shot victory over Gary Jenkins and Mark Shannon.

In the Amateur Men`s Division, it was Greg Steele and Darren Roach of the Riverside Country Club who would complete their weekend with a five shot victory.

Team Roach and Steele would begin their second round paired with Stuart McClune and Jason Doyle of the Riverside Country Club, both teams were tied as each of them carded a score of five under par (-5), 67, giving them both a two-shot lead over 4 other teams who shot a day 1 score of three under par (-3), 69. Roach and Steele, who on the round were eight under par (-8) through fourteen holes finished their final four holes scoring par, bogey, birdie, birdie, respectively, giving them a tournament-low, second round score of nine under par (-9), 63, and a total score of fourteen under (-14), 130.

In the Amateur Net Division, it was 2019 NB Four Ball Champions Duane Mitton and Kris Leask would would take the crown, accumulating a total net score of fourteen under par (-14), 130. The team also finished with a gross score of four under par (-4), 140, giving them a tie for 6th place overall.

For more information on our host, the Algonquin Golf Course please CLICK HERE.

For more information on the 2022 NB Men`s Four Ball, presented by TaylorMade including results and tee times please CLICK HERE.