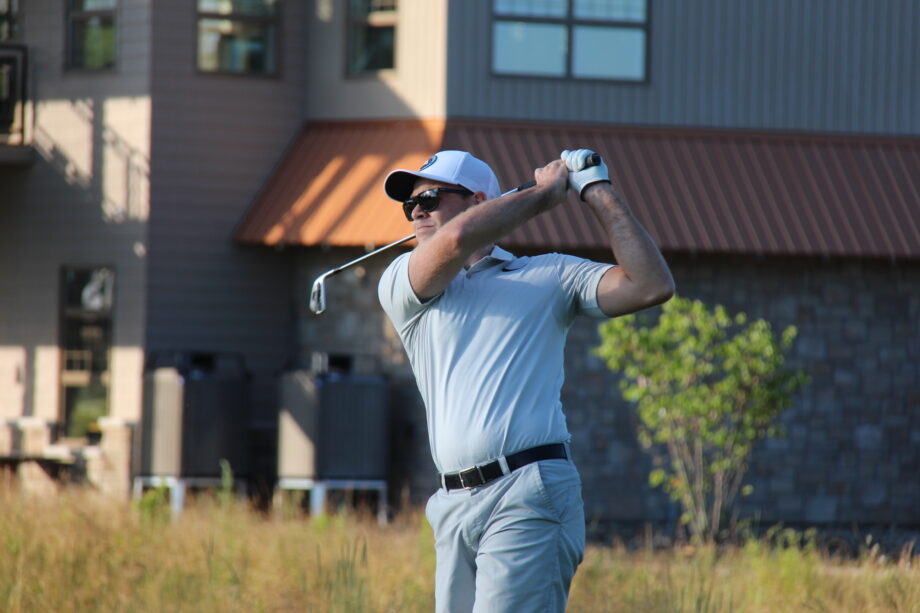 Round 1 leader, Justin Richard teeing off on the first hole.
Golf New Brunswick

FREDERICTON, NB– 156 of New Brunswick’s most elite and competitive amateur male golfers take to the field in the 92nd playing of the New Brunswick Men’s Amateur Championship. For the first time in recent history, the field is at maximum capacity as players from across the province show their excitement and eagerness to test their skills at the inaugural provincial championship at the West Hills Golf Course.

The trio highlight a series of powerhouse pairings as the field features 25 players with plus handicap indexes. Taking to the course immediately after was the three-some of Tyler Crouch, Felix Boucher, and Ben MacDonald all of whom have a more than impressive playing resume. Friday morning’s third pairing featured past champion Justin Richard, Patrick Cormier, and Brayden Sappier.

It was Royal Oaks’ Justin Richard who would get to work early and take advantage of the morning conditions. An opening round 70, 2-under would give the former Amateur Champion the clubhouse lead after round 1. Heating up on the back nine, Richard would record a 34, 2-under thanks to an eagle on #13 and a birdie on the par-5 15th.

After round one, only two players were able to break par. The Riverside’s Peter Wedge carded a smooth 1-under, 71 to find himself 2nd on the leaderboard. Sitting in a tie for 3rd is The Riverside’s Darren Roach, Fredericton Golf Club’s Michel Landry, and Eric Michaud of Royal Oaks. The trio all ended Friday’s round at even-par 72.

A mere image, The Mid-Amateur Leaderboard looks identical with the top three players holding their positions in both championships.

In the Dormie Par-3 Challenge, clubmates Felix Boucher and Maxime Gaudet of Fox Creek share first place after completing the par-3s on Friday’s opening round at 2 under-par.

Round 2 begins on Saturday at 7:00 AM, teeing off in the order of high to low scores from Round 1.