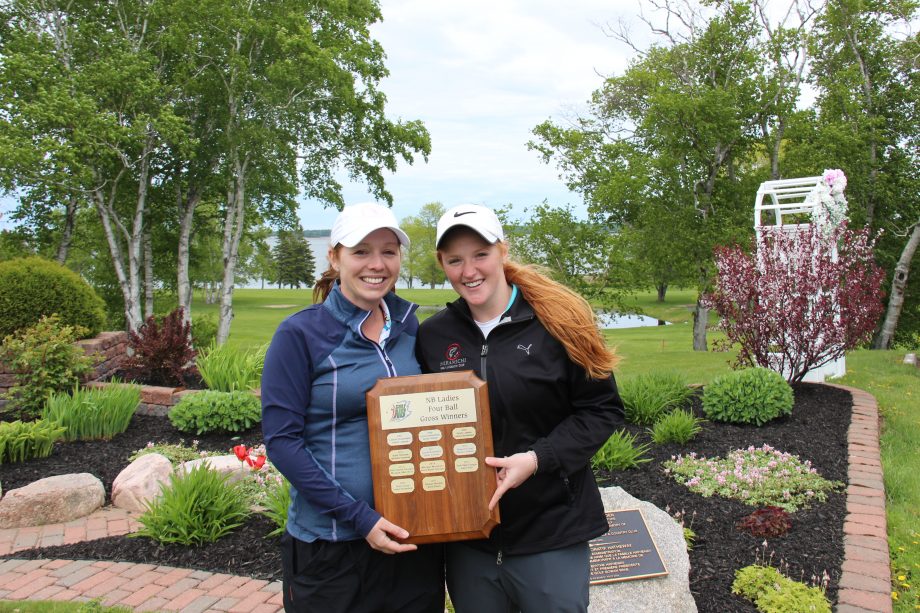 The Gowan Brae Golf and Country Club proved to be a worthy host for a second consecutive year as the NB Ladies Four Ball returned to the par 72 (Robby) Robinson design which features its signature holes of 13, 14, 15, 16, and 17 along the Bay of Chaleur.

This year’s event would see 27 teams of two from across New Brunswick and Nova Scotia compete for both the gross and net championships on a testing day. Teams would be faced with cold and windy conditions on Sunday.

Kristi Roach of The Riverside Country Club and Morgan Matchett of Miramichi Golf & Country Club claimed their second consecutive NB Ladies Four Ball Championship at Gowan Brae. The duo braved the windy and fall like weather to fire a sizzling 6-under 66.

The team of Roach and Matchett began their round by birdying the par 4 1st and the par 5 2nd then paring out until back to back birdies en route to a 4-under 32 on the front nine. The duo continued their performance on the windy back nine as they managed to walk away from holes 11, 15, and 18 with birdies and only falling victim to one bogey on the par 4 13th. This year’s victory allowed Roach and Matchett to add to their already impressive resumes. For Roach, 2018 marks her third NB Ladies Four Ball Victory, previously won with her sister Michelle. For Matchett this is her fourth NB Ladies Four Ball victory in the last six years.

While Roach and Matchett were busy running away from the rest of the field, there was a close competition developing for second.  In the end, the Country Meadows team of Sandy Comeau and Leanne Richardson secured second place with an even par round of 72. In the race for second were the home teams of Molly MacDermaid and Kelly Maher, Shelagh Eddy and Kathy Grebnec along with the Miramichi Golf and Country Club team of Karen Flett and Paula Napke-Flanagan who all finished in a three way tie for third at 3-over 75.

Golf New Brunswick (Golf NB), a not for profit organization founded in 1934, is the official governing body for amateur golf in New Brunswick.  In January of 2006, the New Brunswick Golf Association (NBGA) officially merged with the New Brunswick Ladies Golf Association (NBLGA), resulting in one united governing body for amateur golf in the province.  Programs offered by Golf NB to its 9,000 members include: 12 provincial events, rules of golf education, course rating and handicap services, junior golf development programs and member club marketing initiatives.