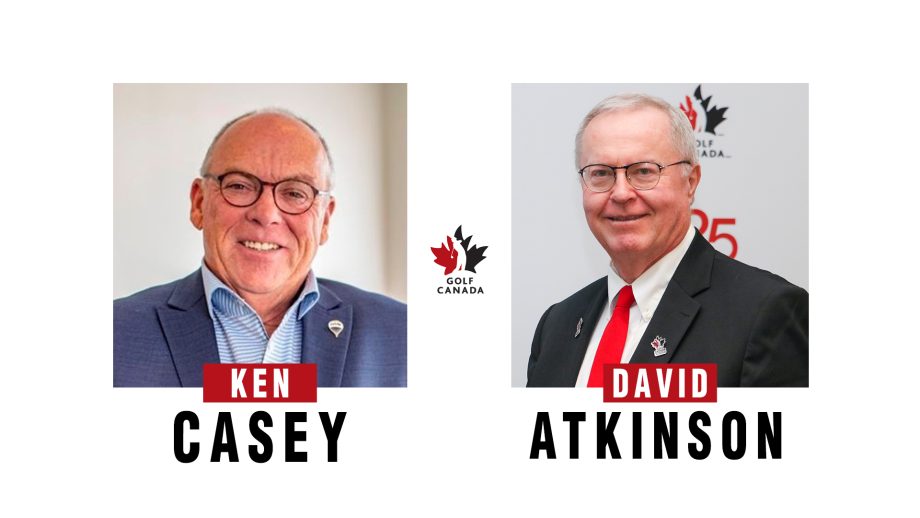 Golf Canada is pleased to announce that Ken Casey of St. John’s, N.L. and David Atkinson, formerly of Vancouver, B.C. and now Goderich, Ont. have been named the 2021 co-recipients of the Bruce Mitchell Volunteer of the Year Award. A presentation of the award will take place on Thursday, March 3rd as part of Golf Canada’s Virtual Annual Meeting.

“Volunteers are integral to the success of golf in this country and on behalf of Golf Canada and all of the provincial golf associations, we are very proud to recognize Ken Casey and David Atkinson for their deep contributions to the advance the game,” said Golf Canada President Liz Hoffman. “They have supported golf in Newfoundland and British Columbia as well as at the national level and have had a major impact on the advancement of the sport in their communities.”

The Bruce Mitchell Volunteer of the Year Award is named in recognition of Toronto native Bruce Mitchell who in 2017-18 was the first Canadian to serve as captain of the Royal and Ancient Golf Club of St Andrews (R&A). Born in Victoria and raised in Edmonton, the former President of the Toronto Golf Club and R&A member since 1988 was just the ninth internationally appointed captain of the R&A, one of the most prestigious volunteer positions in the world of golf. Duties as captain included representing the R&A as a global ambassador and aiding in the R&A’s effort to develop golf around the world.

Now in its 16th year, candidates for the Bruce Mitchell Volunteer of the Year Award are put forth to Golf Canada for consideration by the respective provincial golf associations in acknowledgment of significant contributions to the game of golf in their community.

At 12 years old, he took up the game at Bally Haly Golf Club in St. John’s, N.L. and has enjoyed it for a lifetime. Ken began to volunteer at Bally Haly in the late 1980s where he was elected to serve on the golf committee and several years later was named Golf Captain. In 1990, Ken assembled a group of volunteers to organize the Bally Haly Men’s Invitational (one of the largest in the province) which 30 plus years later continues to draw golfers from all across the province.

In 1994 Ken became President of what was then the Newfoundland Labrador Golf Association (NLGA) and had served the organization across a number of activities and committees over the years. A decade later, he was approached to serve on the Board of Directors of newly formed Golf Newfoundland Labrador ( Golf NL) as Treasurer and after a two-year term, accepted the nomination to serve as President where he spent four years helping to direct the growth and development of the organization.

Ken’s contributions have been felt across the entire organization including the development of a new membership model that provided financial stability. He has also been a champion for new policies to address safe sport, enhancements to the player development program and ensuring that funds were allocated to develop a three-year marketing plan for the organization.

Ken also guided the creation of the Go Golf Booklet initiative and has supported fundraising activities including the development of a junior golf scholarship program.

Although he now lives in Ontario, David Atkinson’s support for the game in British Columbia and nationally has been outstanding.

A constant presence at golf championships in British Columbia, David volunteered as a starter and scorer at a multitude of zone, provincial and national championships as well as the Vancouver Golf Tour. David also has the great honour of serving as the non-playing captain of three Lamley Cup teams.

Administratively, he served seven years on the Board of Directors with of BC Golf including three years as President and three more as Past President. His contributions to the organization were felt across a number of committees including Human Resources, Finance and Governance, and he played an important role helping BC Golf to diversify its Board.

David also plugged in to support the Pacific Coast Golf Association, serving eight years as a Trustee and two years as President in addition to his work at four of the association’s championships.

With Golf Canada, in addition to joining the duty roster at various championships, he served three  years on the Board of Directors and has been an active member of the Governors Council where he participated on and chaired several committees. David has also been active contributor with the Golf Canada Foundation as a member of the Grants and Scholarship Committee.