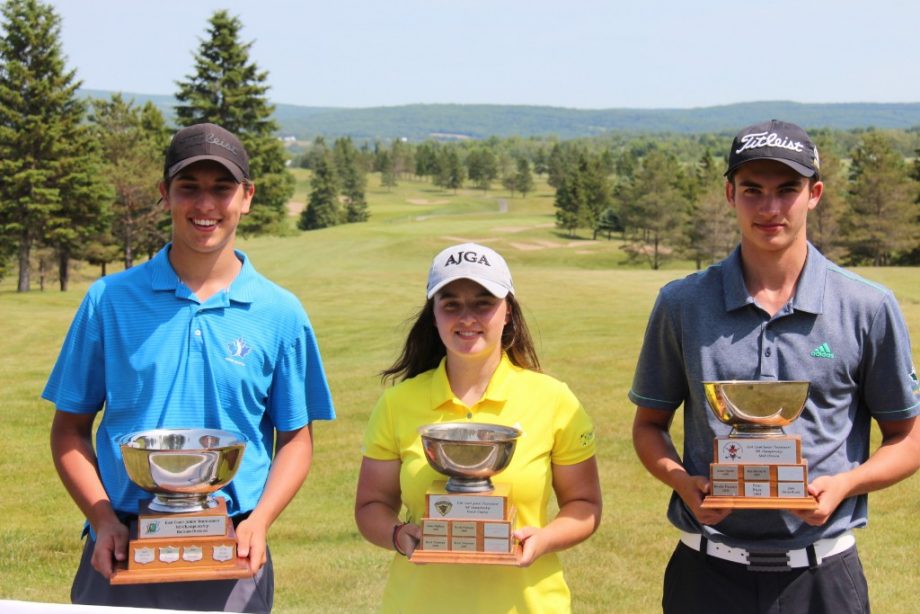 In the Pee Wee Boys Division it was Fredericton Golf Club’s Brady Wood who captured his first  East Coast Junior Pee Wee Boys title. Brady would back up his first round 18 over par (+18), 90, with a second round 12 (+12) over par, 84, and a two-day total of 174, to claim the Pee Wee division by 5 shots over club mate Ben Nicholson.

With 2017 Junior Girls Champion, Laura Jones having graduated to the Amateur ranks, the East Cost Junior Girls trophy was up for grabs. After a competitive battle between Sara Cumby of Ken-Wo Country Club and Camille Lapierre-Ouellet of Cèdres (Les) Golf Club during round 1, it was Lapierre-Ouellet who would build off of her first round momentum to capture her first East Coast Junior Girls Championship. Camille completed the event with a second round 4 (+4) over par, 76, to finish with a two day total of 147. Finishing second and two shots back of the lead was Ashburn`s Haley Baker who recorded an even par (E) round of 72 on day two of the event to finish with a total of 149. The top of the leaderboard follows with Sara Cumby of Ken-Wo Country Club finishing with a second round 11 (+11) over par, 83, 154 total, putting her in third place, Julie Gauvin of Fox Creek finished in fourth place after a final day round of 11 (+11) over par, 83, 163 total, and Gage Golf & Curling Club`s Sarah Holt took fith place after a 12 (+12) over par, 84, 164 total.

In the Bantam Boys division it was Ashburn`s Jordie Cooper following up his opening round of even par (E), 72, with an eight over par (+8), 80, on day two for a total of 152 and the East Coast Junior Bantam Boys title.  Cooper would start the day with two consecutive pars before running into some bogey trouble on the par five 12th, par four 14th, and the par four 16th. Unfazed the Fall River, NS native would record pars on 8 of his last 11 holes to finish the round and secure his 11 shot victory.

With Cooper holding a firm lead in the division, it was race for the runner up position between JH Sport`s Michael Yang and Ethan McFadden of Moncton Golf & Country Club. While Yang would struggle during round 2 posting a 14 over par (+14), 86, his round 1 score of five over par (+5), 77, would leave him with a 163 total for the event and a two stroke cushion over McFadden. McFadden would finish the event with a round 2 score of 10 over par (+10), 82, 165 total, putting him in third place.

The Junior Boys would bring home the 2018 Covered Bridge East Coast Junior Championship, as Owen Mullen of Truro Golf Club looked to pick up where he left off from round 1 and build off of his two under par (-2), 70, to close out the East Coast Junior Championship. Despite a good performance in round 1, Mullen ran into some difficulty during round two finishing with an eight over par (+8), 80, moving him to 150 total for the event. The large numbers made by the leaders created some space to move in the Junior Boys division which Belvedere Golf & Country Club`s Tyler Hashmi took advantage of. Starting the day four shots behind leader Owen Mullen, Hashmi would quickly go to work going on a stretch of 1 under par (-1) thru his first six holes. Tyler would finish round 2 with a one under par (-1), 71, totaling 14, which was enough to move him into first and claim his first East Coast Junior Championship.

Coming in second place was Maxime Gaudet from Fox Creek who shot a four over par (+4), 76, to add to his round 1 score of one over par (+1), 73, making his total for the event 149. Dropping down to third place was Truro`s Owen Mullen who finished 5 shots off the lead.

The East Coast Junior Championship is set for Covered Bridge 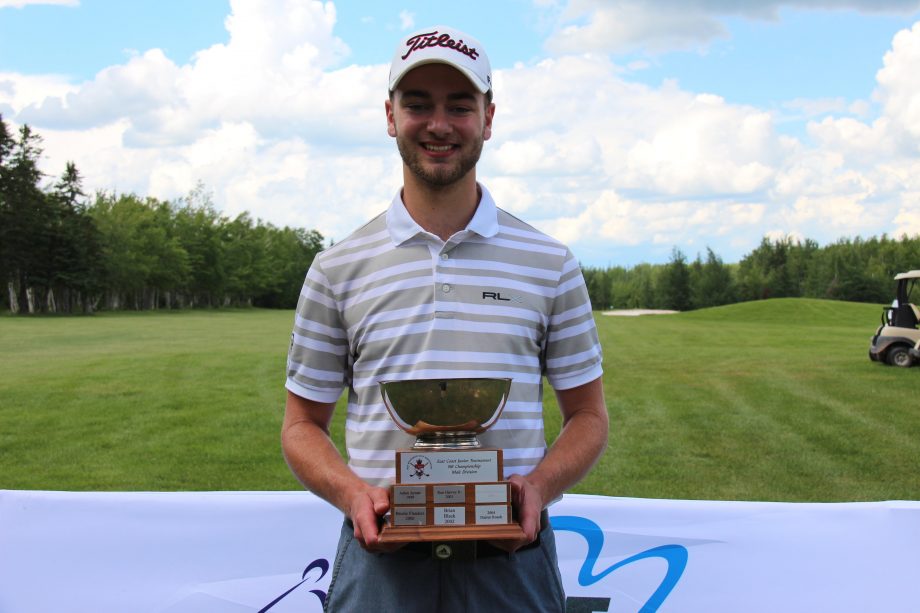 Golf New Brunswick’s (Golf NB) Covered Bridge East Coast Junior Championship will be played June 26th and 27th, 2018 at Covered Bridge Golf & Country Club in Hartland, NB. For the first time in the events history, the East Coast Junior will not be played at Golf Bouctouche Inc. which hosted the event for 19 consecutive years. The change in venue for the 2018 event comes as Golf Canada released its 2019 national championship venue selections, choosing Covered Bridge to host the 2019 Canadian Junior Boys Championship.This year’s event will see 68 juniors from New Brunswick, Nova Scotia, Prince Edward Island, and Quebec competing for the Junior Boy’s Championship, the Bantam Boy’s Championship and the Junior Girl’s Championship. There are 40 Junior Boys, 13 Bantam Boys, 2 Peewee Girls, 3 Bantam Girls, and 10 Junior Girls ready to take on the course for the 36-hole competition.

With 2017 Champion Stuart Earle having graduated from the junior ranks, the Junior Boys trophy is awaiting a new champion. Those competing to be crowned champion of the Boy’s division include 2017 East Coast Junior Bantam Boys Champion, Daniel Kirby of JH Sports, and Harrison O’Pray of Moncton who finished T4 in 2017’s event. Members of the 2017 field such as Nathan Hogan of Miramichi, Maxime Gaudet of Memramcook, and Felix Boucher of Fox Creek are all returning this year and are looking to build off of their performances in last years event.

The Junior Girls Championship  title is a vacant soup as Laura Jones, the 2017 NB Junior Girls champion and 2015 East Coast Junior runner-up out of Country Meadows has graduated from NB Junior Golf. Laura’s departure makes room for an eager and talented field of junior girls in this years event. 2016 NB Juvenile Girls champion and 2017 East Coast Junior Girls runner-up, Sarah Holt of Gage Golf & Curling, looks to build off of her previous success to be crowned East Coast Junior champion. As well, Mackenzie Scott of Kingswood and Julie Gauvin of Fox Creek look to improve on their 2017 4th and 5th places finishes. A diverse field from around the Maritimes promises to make this event as challenging and exciting as ever.