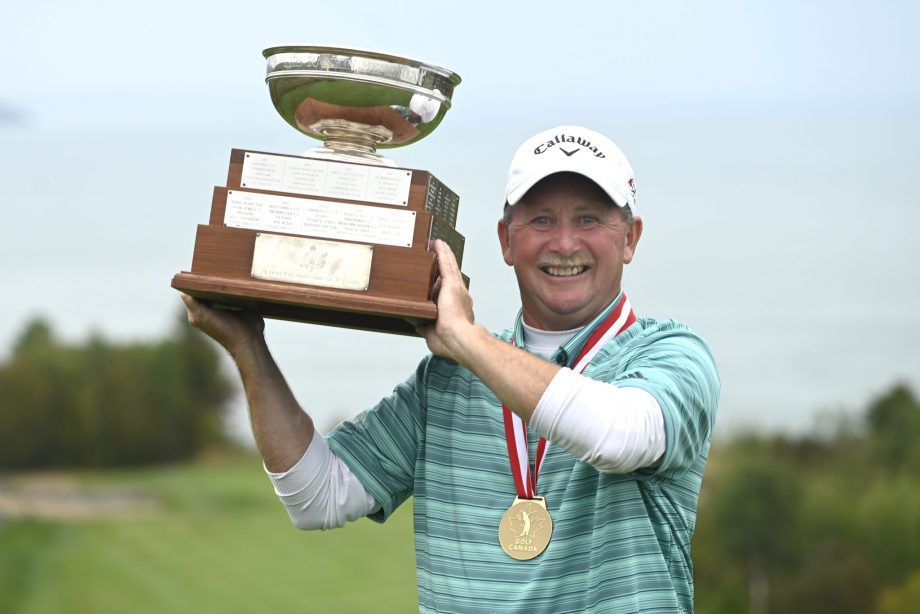 LA MALBAIE, QUE. – The 59th playing of the Canadian Men’s Senior Championship wrapped up today with Darren Ritchie securing the title to etch his name into the John Rankin Memorial Trophy.

The St. John, N.B. native from Hampton Golf Club held the lead for the majority of the tournament, finishing 2 over par 72 to become the first Senior Men’s Champion since Gene Elliot captured the title in 2019. It was the first Canadian Men’s Senior title for the 57-year-old Ritchie.

“I took a lot of years off to be with my family and to take care of them,” said Ritchie. “To get back to playing and to come up here and succeed the way that I did, it’s an unbelievable feeling.”

Ritchie is no stranger to excellence with Canadian Amateur Champion, World Amateur Team Member, New Brunswick Player of the Year, and New Brunswick Sports Hall of Fame Member listed among other accolades in his resume. When asked about his recent success in the tournament, Ritchie pointed to experience and a great starting lead.

“It goes back to the start of the week. I hit the driver so good that I could stand there and just know that it’s going up the middle of the fairway. Whenever I had to make a 3-footer for par, I was fortunate. I made a lot of them this week and a lot of the other guys struggled with it. My golf game is good right now and I just can’t wait to play again.”

With the win, Ritchie receives an exemption into the 2022 U.S. Senior Amateur championship to be contested at The Kittanset Club in Marion, Mass.

Joe Miszk of Niagara Falls, Ont., and Luc Guilbault of Drummondville, Que. tied for runner up, each finishing with a score of 7 over.

A 65-and-over Super Senior Championship ran concurrently throughout the championship with Michel Roy securing the Governor’s Cup with a score of 13 over. The runner up was Mark Bennett from Toronto, Ont. who finished the tournament with a score of +17.

The 2022 Canadian Men’s Senior Championship will be held September 6-9 in Red Deer, Alta.

Additional information, including a full list of competitors and scores can be found here.