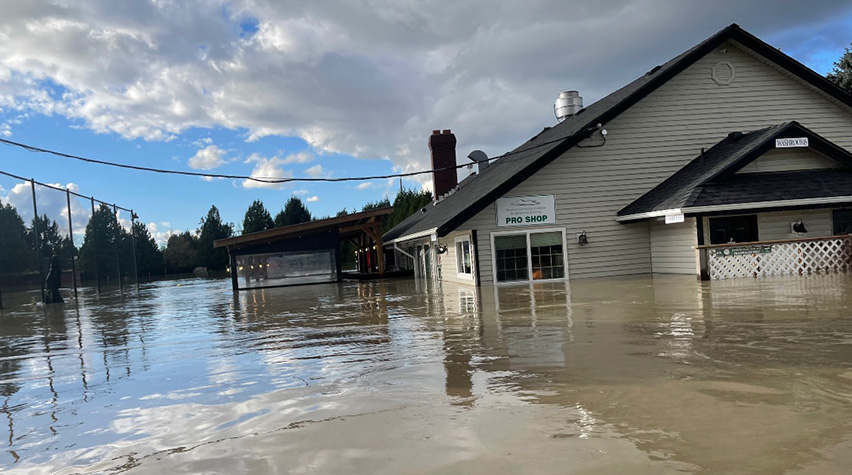 Corrine Allan doesn’t hesitate when asked if she thinks her golf course, now one giant water hazard, can recover from the devastation brought by the flooding in the Sumas Prairie area of Abbotsford.

“Oh gosh, yes,” says Allan, owner and general manager of Fraserglen Golf Course. “I am going to aim for March.There is a lot of water and debris on the course, but once that is cleaned up and the greens are cleaned over time, it will come back just fine.”

Make that lots and lots of water. Allan estimates her clubhouse and restaurant had as much as five feet of water inside them.

“And we have a lot of equipment, as do farmers in the area, that are under water,” she says. “We have our pro shop and a restaurant and another house on the property that are all ruined, basically.”

Fraserglen is one of many Fraser Valley golf courses impacted by last week’s flooding. The par 62 course,located on South Parallel Road near Highway 1, sits on 56 acres. “It’s devastating and I don’t think the shock has fully set in yet,” says Allan. “And nobody has insurance so we’re hoping the government will kick in.”

Flood insurance is not available to homes and businesses in the area because Sumas Prairie sits on a flood plain. Allan has been buoyed by the offers of support she has received. “People have reached out to us like you wouldn’t believe,” Allan says.

“And the golf industry is amazing. They are willing to help. From as far away as Calgary, we’re hearing,‘what can we send you, what can we do for you?’ It’s just really amazing.”

Allan refuses to feel sorry for herself. “I have my family healthy and we can just work really hard to make everything happen. We’ll just roll up our sleeves and get to work. I think that’s all you can do.”

Mission Golf Club wasn’t hit by serious flooding, but the atmospheric river that dropped record rainfall on the area has put one hole out of play. A slide occurred on Mission’s par 3 third hole, which also plays as No. 12 from a different tee for those playing 18 holes. Most of a rock wall fronting the green was washed away in the slide and head pro Mark Anderson expects the hole to remain closed until the early spring. “Luckily we have a practice hole (between holes 6 and 7) ,” Anderson said. “So we can turn that into a par 3. That’s a good back-up for us.”

Chilliwack courses were also hit hard. Royalwood was completely under water and remained closed as of Nov. 21. Nearby Chilliwack Golf Club hopes to re-open some time this week. “We can actually see our golf course again,” said Chilliwack general manager Bryan Ewart. “I think we’ll be okay. None of our buildings were damaged and we’ll get out of this relatively unscathed, unlike some of our neighbours.

“For a while there we had four island greens. It would be good for our marketing: TPC (Sawgrass) has nothing on us.” Ewart said the flooding and this past summer’s heat dome have made it a tough year. “These extremes are pretty harsh,” Ewart says. “I have been here 10 years now and have never experienced anything like this. We keep saying we are so ready for this year to be done.”

The lower portion of Belmont Golf Course in Langley had eight to 10 feet of water on it at one point. Troy Peverley, vice president of the West Coast Golf Group, said the course would be open for nine-hole play this week. Swaneset Bay in Pitt Meadows has all 36 of its holes back in play and the WCGG’s other course, Hazelmere in Surrey, has re-opened after being closed for a couple of days. Pitt Meadows Golf Club remained closed as of Nov. 21. It had large pools of standing water and some damage was done to its bridge on the ninth hole.