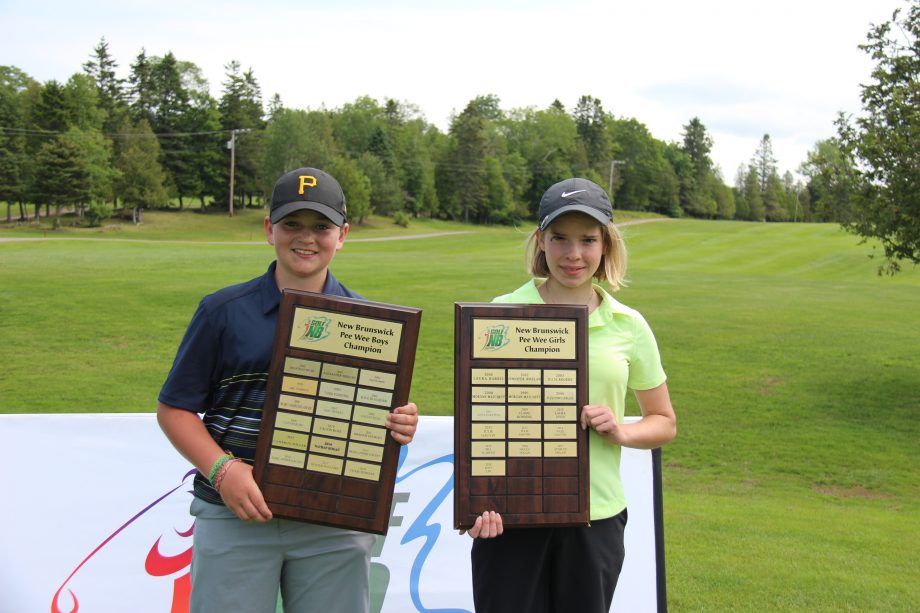 After a foggy start to day 2 at the NB Junior & Pee Wee Championships, the sun started to shine and the temperature and golf started heating up at the Hampton Golf Club. First off the tee were the Pee Wee players who were playing to be named the 2019 Golf NB Pee Wee Champions. As the only Pee Wee Girl entered in the tournament it was still great to see Rachel Steeves from the Sussex Golf & Curling Club play her first Provincial Championship. Steeves enjoyed her first “major” tournament and says she is looking forward to playing in it again next season. She moves up an age bracket next year as she will be 13 years old, making her a Bantam-aged girl.

The Pee Wee Boys title was won by Morgan Costain who plays out of the Westfield Golf & Country Club after shooting a great 84 for his second round in his first Golf NB tournament. Costain started out hot as he was only 2-over par on the front nine after a birdie on the par 6 hole #6 and bogeys on holes #1, #3 and #9. He bogeyed for a few holes on the back nine but he is still talking about his “quad”, as he called it, on his final hole of the day. He ended up shooting 84 for the day and was pleased with his play. Costain had this to say, “I played really well today until my quad on the 18th. I decided to hit my ball over to the driving range on that hole. I am happy I won the tournament though. When asked if he would play in the event again next year, Costain answered, “I will be back but I will be a Bantam next year”. Coming in as Runner-Up was last year’s champion, Chase Burgess from the Petitcodiac Valley Golf & Country Club after shooting a fine 86 to finish 5 shots back after the two days. Finishing at 1st Low Net is first time Golf NB tournament competitor Tristan MacKay of Kingswood Golf & Country Club.

In the Girl’s Division the Baker sisters from NS are trying to keep all of the NB Girl’s titles that they won last year and take them back to NS again this year. Haley is still leading the junior girl’s side while Abby is leading the Juvenile and Bantam divisions. Haley was 3-over on the front nine with 3 bogies on holes #2, #7 and #8, ending the day with a 40. Other than her birdie on hole #17, she hopped on the bogey-train on the back nine for a few holes to finish with a 79. Her sister Abby to low honours of the day after firing a 77 with just 2 bogeys on the front nine combined with her 1 birdie, and 4 bogeys on the back nine. She is only 5 shots back of her sister and if she catches her she would claim all 3 girls’ titles tomorrow. Three shots back of Abby is Julie Gauvin who plays out of Fox Creek Golf Club after slipping a spot after shooting an 85 today.

On Thursday the NB Junior Girl’s Team going to the Canadian Championships in Lethbridge, Alberta will be named. It is a very close race for the 3-player team. Julie Gauvin, Mackenzie Scott, hold the first two positions but there is a tie for 3rd place with Sarah Holt from Gage Golf & Curling Club, Alexandra Guitard of Royal Oaks and Mackenzie Deveau also from Fox Creek Golf Club, still looking to grab a spot. The Baker girls cannot make the NB Team but will most likely be representing Nova Scotia after their Provincial Junior Championship next week.

In the boys, division, Pierre Luc Arsenault is still holding onto his lead in both the Juvenile and Junior Divisions. Arsenault stumbled a bit on day 2 and couldn’t find his touch on the greens. After shooting even par yesterday, he followed it up with a 79 today for a 2-day total of 151. The main difference was no birdies on day 2 after four of them in the opening round. After shooting a round of 74, Nick Ritchie, the hometown favourite, vaulted into 2nd place in both the Juvenile and Junior divisions. His round started on the back nine where he made birdies on hole #12 and #18 for a 2-under 33. His back nine contained a birdie and a bogey but the two double bogies on the back slowed him down a bit. The final tally was a 2-over par 74 leaving him just 1-shot back of Arsenault at 152. Daniel Kirby of JH Sports made a move on Day 2 after shooting a 75 with a 1-under par 36 on the front and 4 bogeys on the back for a 39. Day 1 he shot a 78 so that leaves him with a total of 153. Tied with Kirby is Felix Boucher who represents Fox Creek Golf Club who’s 76 on day 2  combined with day 1’s 77 also leaves him at 153.

Gavin Ives who plays out of the two Ashburn courses in NS is running away with the Bantam title. His scorecard had 10 pars and 8 bogeys for an 80 and a 2-day total of 164. Nicholas Colton who represents the Gowan Brae Golf & Country Club is in 2nd place and Jacob LeBlanc is currently holding down 3rd spot.

On Thursday, the NB Junior Boy’s Team going to the Canadian Championships in our own province at the Covered Bridge Golf & Country Club will be named. There are a few people vying for the 3-player team so aforementioned Pierre Luc Arsenault, Nick Ritchie, Daniel Kirby, Felix Boucher and others lurking for a spot on Team NB. Day 3 is shaping up to be a great day at the NB Junior Championship at Hampton Golf Club.