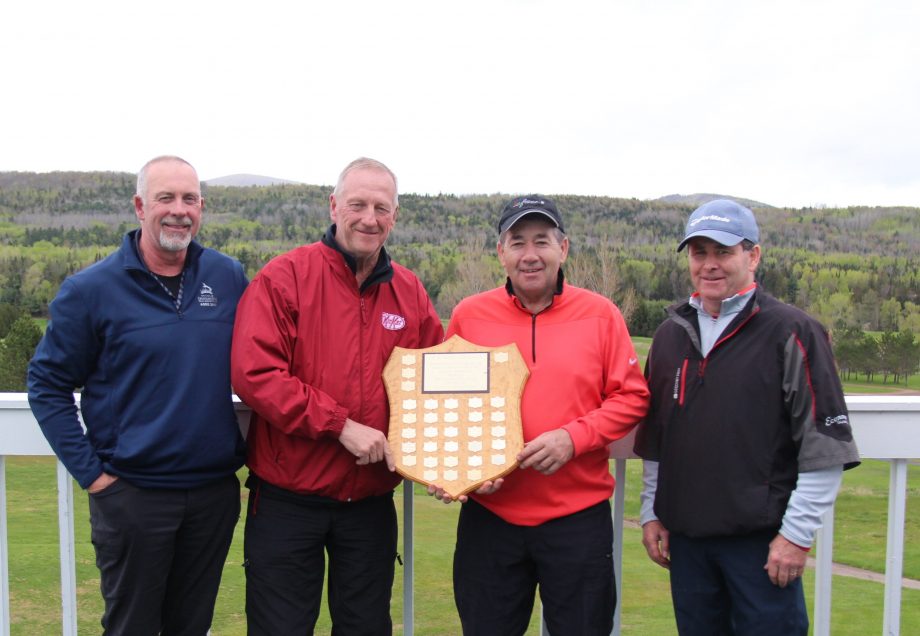 With Saturday’s sunny weather in the rear-view mirror, Sunday brought cold and wet conditions to challenge the field at the NB Men’s Four Ball Championships presented by TaylorMade, the first event of the 2019 Golf NB Championship Schedule, sponsored by Argus Audiology.

In the Senior Men`s Division, after a 10th tee start, the Aroostook Valley Country Club team of Henrick Hansen and Brian Shannon would climb to the top of the leaderboard, surpassing first round leaders Brent Wilson and Patrick Woodford of the Moncton Golf and Country Club. Hansen and Shannon would fire a two under par (-2), 36, on the Sussex Golf & Curling Club’s difficult home stretch with a clean card that included birdies on the two par fives (#10th and #14).  With Hansen and Shannon making a charge, Wilson and Woodford would bogey the 13th and 18th but pulled out a birdie on #14 to stay at one under par (-1), 37, to finish off their first 9.

Hansen and Shannon would continue their solid play on their inward nine (the club’s front nine) carding a birdie on the par three 4th and a bogey at the 8th to close with an even par (E), 36, to card a final round two under par (-2), 70, good for a two day total of two under par (-2), 140, that would see them as the leaders in the clubhouse.

Not to be outdone, Wilson and Woodford would make up their one shot deficit to Hansen and Shannon with a bogey free inward nine holes and with a birdie on the par four 7th.  The birdie would see them close with a one under par (-1), 35, for an even par (E), 72, and a two-day total of two under par (-2), 140, and in a tie at the top of the leaderboard.

With difficult playing conditions continuing to present themselves, and in a show of tremendous sportsmanship, Hansen & Shannon and Wilson & Woodford mutually agreed to forgo the playing of a playoff in favor of sharing the 2019 NB Senior Men’s Four Ball Championship, presented by TaylorMade.

Alone in third position was the Fredericton Golf Club team of Sonny Phillips and Pat Garagan.  After carding a two over par (+2) first nine holes, the pair would birdie three of the first five holes, before bogeying #6 and #8, on their inward nine and finish the round at one over par (+1), 73, and with a two-day total of even par 142.

In the net division it was 2018 NB Senior Men’s Four Ball Champions Steve Wilson and Dave Stewart of Sussex sharing low net honors with Hampton’s Gary Swain and Robert McIntyre.  Wilson and Stewart would card a net seven under par (-7), 65, on day two while Swain and McIntyre would fire a net 66 (-6) to see the two teams tied at the top of the standing with a two-day total of thirteen under par (-13), 129.

Holding down the third low net position was another Hampton duo of Gerry Garnett and Charlie Christensen.  The pair would share the day’s low net round of eight under par (-8), 64, with the team of Doug Holland (Algonquin Golf Course) and Lawrence Justason (St. George Golf Course), which see them finish with at two-day total of net 130 (-12), one shot clear of Holland and Justason.

In the Amateur Men`s Division, the quest for the “Ralph Costello Shield” came down to steady play.   After posting a three under par (-3), 69, on day one, the youngest team of the NB Men’s Four Ball, Nathan Hogan (Miramichi Golf and Country Club) and Teran Newell (Shelburn, NS), struggled to keep their lead in round 2 on Sunday. After losing 4 shots on the front nine, they fell behind Moncton duo Stephane Boudreau & Colin Manning and Sussex duo Kris Leask & Duane Mitton who were moved into a tie for first after 27 holes.  A birdie on #4 would help Boudreau and Manning to the front of the pack while a bogey on #9 for Leask and Mitton would hold their spot.

The back nine would see the home town boys separate themselves from the pack on route to claiming their first NB Men’s Four Ball title.  Despite giving another shot back with a bogey on the par three 13th, the pair would bounce back with birdies at the par five 14th and another at the par four 16th to card a one under par (-1), 35, on the back nine good for a final round even par (E), 72, and a two day total of two under par (-2), 140.

Despite more good golf from the team of Manning and Boudreau, a bogey at the par four 12th would bring them back to even par on the day and good for a share of 2nd with a two-day total of 142, two shots back of Leask and Mitton.

Despite carding a double bogey 7 on at the dangerous par five 1st, the Westfield Golf & Country Club team of Mike LeBlanc and Matt Mason would move up the leaderboard into a share of 2nd on the heels of a three birdie, two bogey and one double bogey one over par (+1), 73, drawing them even with Boudreau and Manning.

In the Net division it would be the team of Matt Garnett (Hampton Golf Club) and Brodie Bourque (St. George Golf Course) claiming their