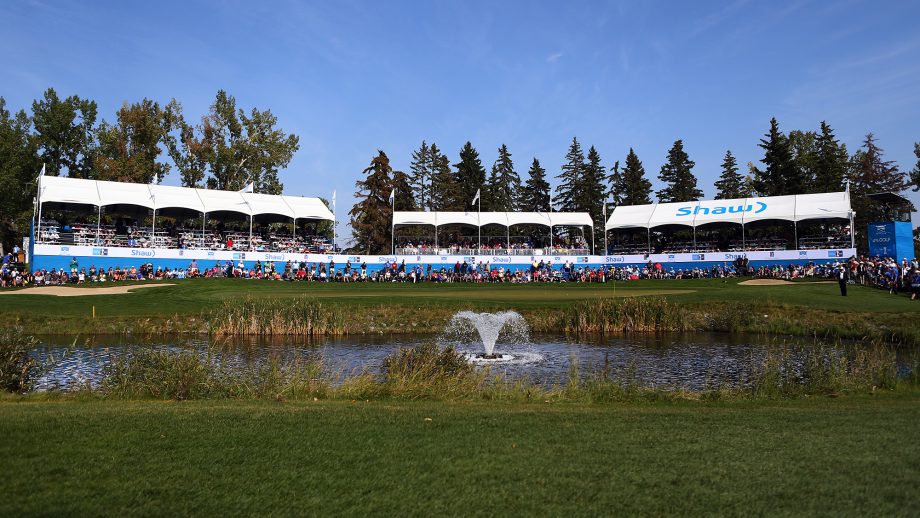 CALGARY, CANADA - SEPTEMBER 2: View of the 18th green during the final round of the Shaw Charity Classic at the Canyon Meadows Golf and Country Club on September 2, 2018 in Calgary, Canada. (Photo by Vaughn Ridley/Getty Images)

CALGARY—Standing high atop the city’s skyline at the Calgary Tower, the Shaw Charity Classic announced it has shattered its own fundraising record for a sixth straight year on the PGA TOUR Champions with a $12,357,863 donation that will be shared amongst 182 youth-based charities in Alberta.

Smashing its target of hitting the $10 million mark for 2018, the sizeable donation now brings the award-winning tournament’s fundraising totals to more than $34 million since its inception on the senior professional golf circuit in 2013.

“This donation is nothing short of remarkable. Year-after-year our tournament has broken records for charitable giving on the PGA TOUR Champions, and we have done it again in 2018,” said Jim Riddell, who will continue to build on his father, Clay’s legacy, ensuring the Shaw Charity Classic continues to have a positive impact on Alberta youth.

“Achieving these substantial fundraising goals is simply not possible without the shared passion we have with our incredible corporate partners for watching the greatest names in golf come to Calgary, and a commitment to helping the children in our province. I know we will continue to have a tremendous impact on the lives of Alberta youth through the continued support of this program.”

To support the growth of the Shaw Charity Classic’s fundraising efforts, the tournament’s title sponsor, Shaw Communications, also signed on this year as the title sponsor for the Shaw Birdies for Kids presented by AltaLink program. Shaw kicked off this year’s fundraising by donating $1 million to the charitable giving program, which will benefit over 180 charities across Alberta.

“The Shaw Charity Classic has given us a meaningful opportunity to connect to the city we love and support the people and organizations who work to make our communities a better place, every day,” said Brad Shaw, CEO, Shaw Communications. “Through the support and dedication of the partners, fans and volunteers who help to ensure the success of the tournament, this year’s event will have a significant impact on the lives of hundreds-of-thousands of kids and youth from across our province.”

With the tournament’s charitable spirit rooted in the generous leadership of Shaw Communications and AltaLink, the record donation in 2018 will have a positive impact on more than 500,000 youth representing over 180 charities in the areas of sports, arts, health, development and counselling. The program welcomed donations from more than 3,127 Canadians in all corners of the country.

“Every year I am amazed at how the Birdies for Kids participating charities come together with donors across our country to improve the lives of hundreds of thousands of kids, and this year is no different,” said Scott Thon, President and CEO of AltaLink. “Being the presenting sponsor of the Birdies for Kids program is incredibly rewarding, and the good the program does in our community made it easy for us to sign on for another three years earlier this year.”

After partnering with children representing nine of the tournament’s official charities to unveil the 2018 donation, the Shaw Charity Classic announced Jim Riddell as its new tournament chairman. Riddell will build on his father, Clay Riddell’s, vision for bringing the PGA TOUR Champions to his home club at Calgary’s Canyon Meadows. Clay, the driving force behind making the Shaw Charity Classic a reality, passed away in September at the age of 81.

“My father’s vision for bringing professional golf to Calgary was clear – to help the children in our community live a healthier and happier life,” said Jim Riddell. “Working with the patron group, the event team, our corporate partners, and the PGA TOUR, we will continue to expand the unparalleled legacy he has established with this tournament by helping as many kids as we can throughout Alberta.

“I know he would be smiling tonight in celebration of what we achieved together this year. Tomorrow, he would be challenging us to raise the bar and do even better in 2019. Giving back to Alberta through a premier sporting event that benefits the next generation of Albertans is as important to me as it was to my father.”