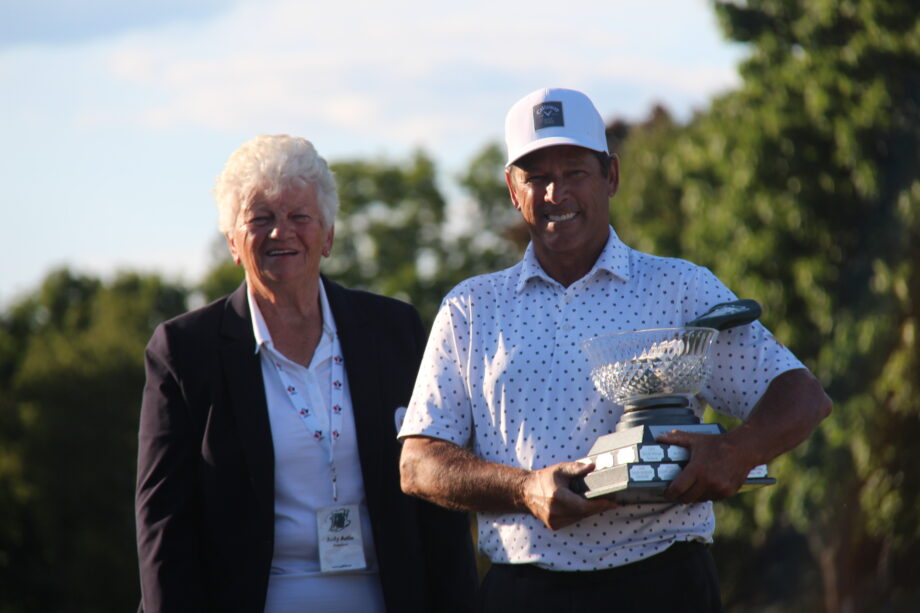 MACTAQUAC, NB: A warm and breezy afternoon greeted players at the NB Men’s Senior Championship ahead of Wednesday’s third and final round. After 36 holes, very little divided players at the top of the leaderboard, with a number of competitors in contention for the Senior and Super-Senior titles.

The final two games took to the course beginning at 2:30 PM. With all players within 6 shots of the lead, Wednesday’s afternoon would set up to be an exciting final round.

The Men’s Senior Championship turned out to be a spectacular one. The crown was captured by Jacques Legere of the Florida State Golf Association who was a last-minute addition off the waitlist, but worth it nonetheless. Legere began the day in a tie with Gage’s Tom Cameron and was able to tally a score of two-under-par 70, including a hole-out eagle on the par 4 10th, adding to his impressive resume of big-time shots at Mactaquac: albatross during round 1, eagle on the par 5 1st during round 2, and his hole out eagle from round 3.

We then saw the 2021 Canadian Men’s Senior Champion Darren Ritchie fire a round 3 score of three-under-par 69. Ritchie who was sitting at one-over par after the 10th hole turned on the jets and carded 4 straight birdies to then finish his round with four straight pars giving which was enough to give him a share of second place in the Senior division with Tom Cameron. Both players would finish their tournament at five under par.

This would also earn them each a spot to represent New Brunswick at the 2022 Canadian Men’s Senior Championship held in Red Deer, Alberta, from September 6th-9th. The third available spot on Team NB was captured by Dan Coulombe of the West Hills Golf Course. Coulombe fired a round 3 score of one-over par 73, giving him a 3-day total of one-over par.

The Super-Senior division was successfully defended by back-to-back champion, Paul Batchelor of the Ashburn Golf Club who held the honour along with Tom Cameron for the tournament low round, both players recording scores of 67. Batchelor gathered a third-round score of one-over par 73 giving him a tournament total of three-under-par, and a commanding 7-shot victory over runner-up Robert McIntyre of the Hampton Golf Club. McIntyre tallied scores of 72-74-74 for a total of four over par on the week. The third place finisher was Kevin Farmer who ended his event with a combined score of six-over par.

The Mactaquac Golf Course proved to be gracious hosts while providing players with a true test of championship golf. The 2022 NB Men’s Senior & Mid-Master Championship concludes Golf NB’s Major Championships for the season; next on the docket is the 2022 Family Classic & Adult Junior hosted by Country Meadows on August 8th.