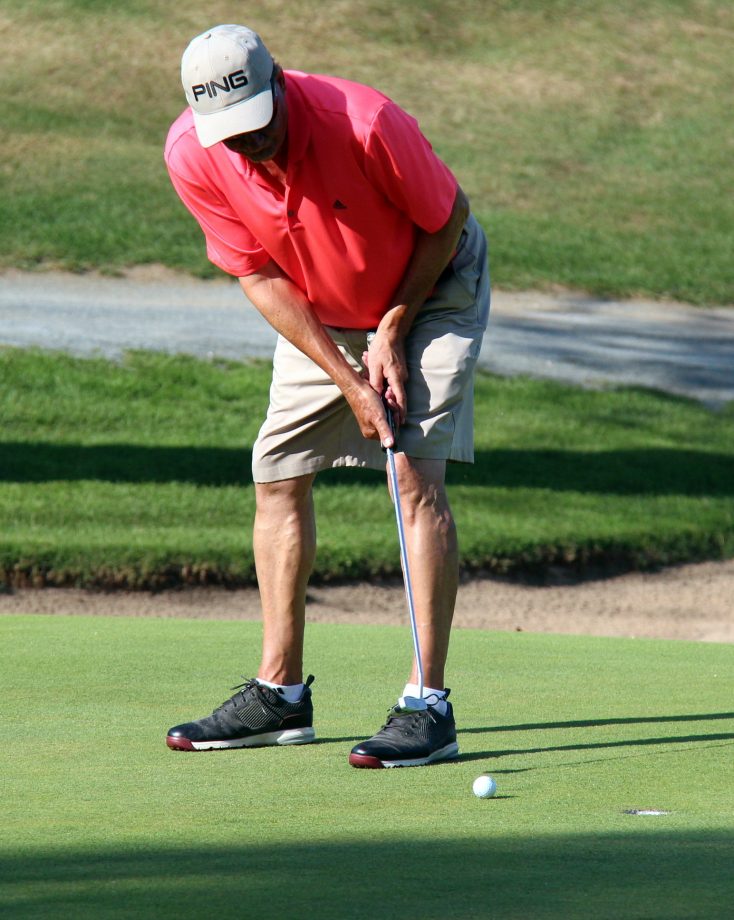 Wilfred Pilgrim sinks his putt on #18 to force a playoff

The 54-hole competition includes 103 men in the senior division and 53 in the mid-master division. The 2017 Senior Men’s champion, Wilf Pilgrim of Kingswood, 2017 Mid-Master champion, Ed Reevey, of Riverside and 2017 Super-Senior champion Herrick Hansen of Aroostook valley will be all returning to defend their titles.

In the mid-master field is three-time defending champion, Ed Reevey of The Riverside Country Club. Along with being a three-time champion of the mid-master competition, Reevey is also a two-time mid-amateur champion having won in back to back years in 2009 and 2010, and a former men’s amateur champion. Reevey will have tough competition as he searches for a fourth consecutive title with multiple champions of past events looking to claim the 2018 NB Mid-Master Championship Presented by Audi Moncton. Paired with Reevey in the first pairing of the day on Monday is three-time mid-master champion and two-time mid-amateur champion, Tony Mackinnon of Fredericton and Tim Yorke of Prince Edward Island.

Aroostook Valley’s Herrick Hansen will be looking to finish where he left off from last year’s event at Gowan Brae where he captured the 2017 NB Men’s Super-Senior Championship by four strokes over Jean Leblanc of Fox Creek, Gilles Masse of Gowan Brae and Louis Boudreau of Pine Needles who all return to the field this year at Royal Oaks. Hansen will have no shortage of competition this year as he tries to capture his second consecutive NB Super-Senior Championship. Joining Hansen in the Super-Senior Division is Fredericton’s Sonny Phillips, Bob Maher and Greg Blake along with Bernard Leger of Royal Oaks and Gerry Duguay of Restigouche.

The third and final position on the Mid-Amateur Team NB, along with the first alternate position, will be awarded at the 2018 NB Mid-Master Championships Presented by Audi Moncton. The final team member will be joining the Willingdon Cup Team alongside Alex Palmer of The Riverside Country Club and Ryan Allaby of Hampton who will represent the province at the 2018 Canadian Men’s Mid-Amateur Championship, to be held from August 21 to 24, 2018 at the Victoria Golf Club in Victoria, British Columbia.

With many great players and past champions in both the mid-master and senior fields, the event will be sure to have plenty of excitement over the three-day tournament at Royal Oaks.