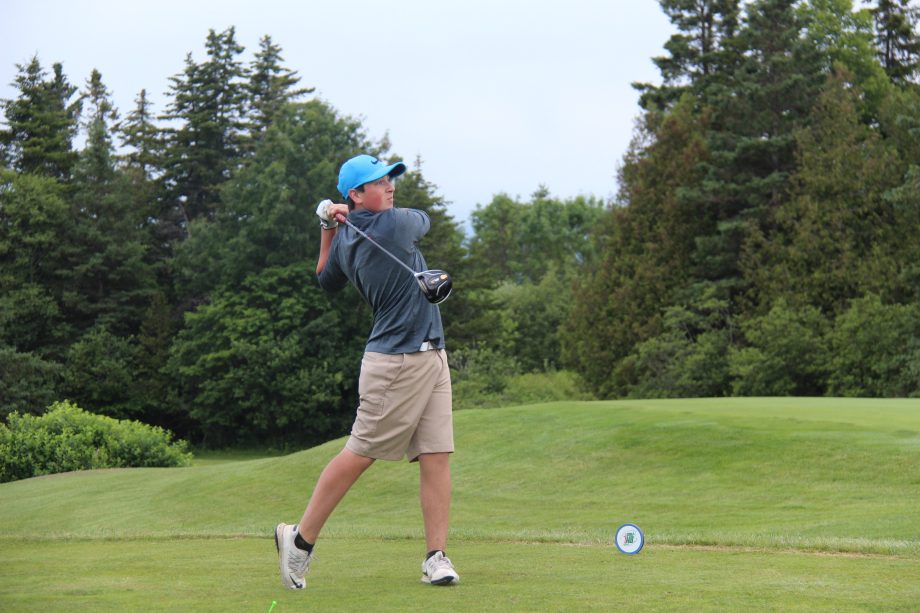 A foggy and mild morning started off round 1 of the NB Junior & Pee Wee Championships in Hampton with the first group of Ethan Colpitts from Hillsborough, Maxime Gaudet of Fox Creek, and Pierre Luc Arsenault of St. Ignace teeing off at 7:30am. As the day progressed golfers later in the draw were greeted with a sunny and very warm day at the Hampton Golf Club with temperatures reaching as high as 33 degrees Celsius with the humidex.

The junior boys were the first to tee off today and were happy to finish by 2:00 to escape the heat of the day. Tied for the lead after day 1 are Juvenile Boys Devon Gionet and Nathan Hogan of Miramichi Golf & Country Club. Gionet started his round with an even par 37 on the front nine after recording a bogey on the par-4 5th hole and a birdie on the par-4 8th. Devon would then run in to some bogey trouble on the back nine as he bogeyed 5 of his last nine holes to finish his first round with a four-over par 76. Nathan started his round by birdying the par-5 1st followed by back to back bogeys on the par-4 2nd and 3rd holes to finish the front nine one-over par 38. Hogan finished his round with a three-over par 38 on the back totalling 76 for his first round. The two Miramichi club mates hold a one shot lead going into round 2 over Juvenile Boys, Daniel Kirby of JH Sports & Covered Bridge Golf & Country Club and Felix Boucher of Fox Creek.

In the Bantam division, Covered Bridge’s Ethan McFadden is leading after his first round 10-over par 82. Ethan started his round with a bogey on the par-four 2nd, a double on the par-four 5th and finished the front nine with a birdie on the par-four 8th to finish three-over par 40. As the heat began to set and the green’s speed up the back nine became difficult. McFadden finished his round with a 7-over par 42 on the back to finish with an 82. Sitting in second place one shot back off the lead is Brandon Casey of Fraser Edmundston who fired a first round 11-over par 83. In solo third is JH Sport’s Michael Yang who finished 15-over par 87.

The girls were the next grouping to play the golf course and leading the way, fresh off of a solid performance at the East Coast Junior is Sarah Holt of the Gage Golf & Curling Club. Holt recorded a 7-over over 79 in hot and fast conditions on Tuesday. She started her round with a chip in birdie on the par-four 2nd followed by a double bogey on the par-four 3rd and a bogey on the par-three 7th to finish the front nine 2-over par 39. As the day grew old and the heat set in the course started to show it’s teeth. Holt finished her round with a 40, five-over par on the back nine. Her play during round one was enough to give her a comfortable two shot lead over Juvenile Girl Abbey Baker of Ashburn Golf Club and a five shot lead over 2018 East Coast Junior Girls Champion Camille Lapierre-Ouellet of Granby, Quebec.

Round 2 is the final round for the Pee Wee’s with all other players continuing on until Thursday. Golf starts again tomorrow at 7:20 am.