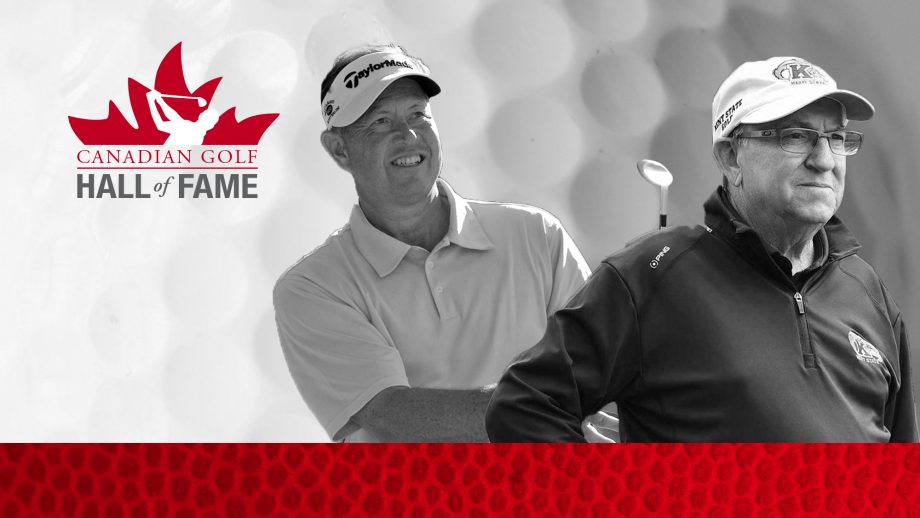 Spittle, 63, from Niagara Falls, Ont., will be inducted in the player category, while the 67-year-old Page, who is a native of Markham, Ont., will be inducted as a builder for his accomplishments as a collegiate golf coach with the NCAA Division I Kent State Golden Flashes. With their inductions, the pair become the 82nd and 83rd honoured members of the Canadian Golf Hall of Fame.

“The Canadian Golf Hall of Fame strives to recognize the outstanding achievements of golf’s greatest players and supporters and it’s an absolute privilege to welcome Rod Spittle and Herb Page as our newest honoured members,” said Sandra Post, Chair of the Hall of Fame’s Selection Committee. “Rod was an accomplished player at the amateur level and later as a professional, while Herb has made a significant impact in the lives of countless student-athletes through his long tenure with Kent State’s golf program. I know I speak on behalf of the entire selection committee as well as the honoured members when I say they are both very deserved of their appointments.”

“I am humbled and thrilled beyond words to be inducted into the Canadian Golf Hall of Fame,” said Spittle. “It is an honour to be recognized and included in this group of golf ambassadors and elite players,  The induction will be even more special for me since the ceremony will be hosted at Hamilton Golf Club, where my dad caddied as a youngster and where I won my first Canadian Amateur in 1977.”

Please give a warm welcome to our 82nd and 83rd inductees into the Canadian #golf Hall of Fame: Rod Spittle and Herb Page ??????

With his induction, Page becomes the 25th person inducted into the Canadian Golf Hall of Fame’s builder category and the first-ever coach.

“It’s been an honour and a pleasure to have the opportunity to help so many young student-athletes grow both on and off the course,” said Page from his home in Ohio. “It’s always great to be recognized for your hard work and this nomination is extra special, but the real gratification comes from seeing players mature into outstanding people.”

Spittle and Page officially join the Canadian Golf Hall of Fame during an induction ceremony that will take place Tuesday, June 4th, 2019 during RBC Hall of Fame Day as part of the 2019 RBC Canadian Open on the grounds of Hamilton Golf and Country Club.

Click here to listen to the media teleconference announcement.

Born July 18, 1955 in St. Catharines, Ont., Rod Spittle had a successful amateur career, finishing runner-up at the 1973 Canadian Junior and winning the 1977 and 1978 Canadian Men’s Amateur Championships while playing Division I golf at Ohio State.  Provincially he also helped Ontario win back to back Willingdon Cups (1977-78). During his collegiate golf career, Spittle helped the Buckeyes win the BIG Ten Championship three consecutive years (1976-1978) alongside teammates John Cook and Joey Sindelar, who both went on to enjoy successful professional golf careers that included PGA TOUR victories.

After graduating in 1978 with a degree in Business Administration, Spittle opted to focus on supporting his family by selling insurance for 25 years and continuing his passion for the game in amateur golf. He won a pair of Columbus (Ohio) District Amateur Championships (1989 and 1987) and three Columbus (Ohio) District Mid-Amateur titles (1994, 1995 and 1997). He went on to claim the Ohio Mid-Am Championship three times (2000, 2001 and 2003) prior to turning professional in 2004, shortly before turning 50.

Spittle and his wife, Ann, left their regular jobs behind and made a 5-year plan to fulfill the dream of playing professional golf. In 2009, four years into that plan, Spittle’s goal of being a full-time Tour professional took a severe hit after he failed to secure PGA TOUR Champions status and did not play in a single event.

In 2010, the final year of the five-year plan, Spittle was forced to Monday qualify into events. Playing with limited status, Spittle got into only five events the entire 2010 season. He Monday qualified into the final event of the year, the AT&T Championship, and in a storybook ending, he played stellar golf all week and beat Jeff Sluman in a playoff for his first-ever professional title. Just like that, his dream of playing professional golf, nearly dead and gone, gained new life with a full exemption for 2011 as a PGA TOUR Champions winner.

In 195 starts over his 13-year PGA TOUR Champions career, Spittle missed just five cuts and earned more than $4M in prize money. He never missed more than one cut in any year, and played nine full seasons without missing a single cut. He had a pair of runner-up finishes, a pair of third-place finishes and had 23 top-10s. He played his final PGA TOUR Champions event on home soil, finishing T17 at the 2018 Shaw Charity Classic.

On a personal level, he and his wife Ann have three children (Leslie, Steve and John) and seven grandchildren. The Spittle’s proudly support Special Olympics initiatives in their hometown of Columbus, Ohio. Spittle was inducted into the Ontario Golf Hall of Fame in 2013.

Born March 16, 1951 in Markham, Ont., Herb Page has been a fixture on the Kent State University campus since arriving as an undergraduate three-sport student-athlete (golf, football and hockey) in 1970. Nearly 50 years later, now the university’s director of golf, Page has grown to become one of the most respected golf coaches in the world.

Page, who coached two PGA TOUR winners, also mentored Kent State graduate Ben Curtis, who claimed the 2003 Open Championship as well as a runner-up finish at the 2008 PGA Championship, before retiring from competitive golf to open his own golf academy.

He also played an instrumental role in the 1997 launch of the women’s golf program at Kent State, opening a post-secondary for path for Canadian women from B.C., Alberta, Ontario and Quebec including Jennifer Ha, Kira Miexner, Josee Doyon, Taylor Kim and Kirby Dreher as well as Veronique Drouin who is Women’s Head Coach at Oklahoma and Jan Dowling who is Women’s Head Coach at Michigan.