Robitaille, Baker and Ives are Crowned Champions at the 2019 East Coast Junior Championship 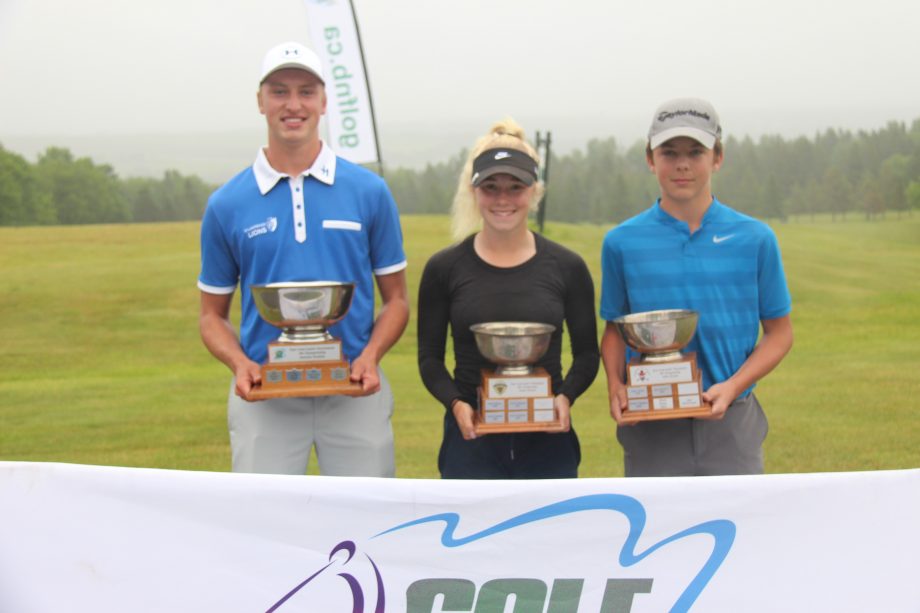 The final round of the East Coast Junior Championship was met with light rain and a little bit cooler temperatures, but nothing could dampen the spirits of the 96 junior golfers from New Brunswick, Quebec, Nova Scotia and Prince Edward Island ready to attack the Covered Bridge Golf Course. The players did not disappoint as two of the titles had to be determined by playoffs.

Anthony Robitaille who represents Lac St-Joseph Golf Club in Quebec entered the day 5 shots back of first round leader Jean-Phillip Parr from the Ki-8-Eb, also in Quebec, and 4 shots back of Owen Mullen from the Truro Golf Club in Nova Scotia. Robitaille fired a 2-under par 70 to be leader in the clubhouse with a 2-day total of 1-under par and waited for the last two groups of junior boys to finish play. His 70, which was the low round of the day, started off with birdies on holes #1 and #3, a bogey on hole #5 but got that back quickly with a birdie on #6 to finish the front nine with a 2-under par 34. One birdie, one bogey and 7 pars on the back led to his round of 70. Now it was time to wait to see if he shot well enough to get into a playoff. Parr also started off hot with birdies on #1 and #3, and like Robitaille, had a bogey on #5 but the similarities ended there. Parr also had a bogey on the par four 8th hole to shoot an even par 36 on the front. On his back nine he ran into trouble on the tough par five 12th hole scoring a double bogey 7 and threw in a bogey on the 15th for a 3-over par 39 on the back and a 75 total. His 75 paired with his 68 on day one also put him at 1-under par for the tournament. Mullen had an up and down front nine with 3 birdies and 4 bogeys for a 1-over par 37 to lose a stroke to Parr. On the back nine he had a birdie on number 12 to make up 3 shots on Parr but then had bogies on 15 and 16 to be tied with Parr. His missed his 6-foot birdie putt gave him another 37 on the back nine and a 2-day total of 1-under par to tie Robitaille and Parr.

The playoff holes were slotted as #1, #17 and #18 and those would be played until a winner was declared. They all parred the first hole and when Mullen bogeyed the 2nd playoff hole (#17) he was eliminated from the playoff. Robitaille and Parr carried onto the third playoff hole (#18) where Robitaille had a birdie to Parr’s par, making him the champion.

Haley Baker who plays out the Ashburn Golf Course in Fall River, NS and Sarah Holt of the Gage Golf & Country Club in Oromocto were tied at 11 over par to enter their playoff. After shooting matching 77’s on day one, they decided to shoot matching 78’s in the final round so they could continue their play together. Holt got off to a rough start with a double bogey 7 on the first hole as Baker had a par but she bogeyed the next two holes to bring them back to even with each other. With that double, one bogey and the rest pars, Holt shot a 39 on the front to Baker’s 40 to take a 1-shot lead. That didn’t last long as Baker birdied the 10th hole to draw back to even with Holt. After trading a few bogeys, Holt held a 1-shot lead going into the last hole. Baker sunk a beautiful 15-foot birdie putt to tie it up again. The girls played the same rotations of playoff holes as the boys, but it took the girls 4 playoff holes to declare a winner. Baker’s par on hole number one took the championship after Holt had a bogey. It was great play by two wonderful players.

Third place in the girl’s division went to Yasmine Qureshi who shot the low girl’s round of the day with a 75 and finished 1 shot out of the playoff. Another shot back, finishing in forth place was Baker’s younger sister, Abby.

Gavin Ives who is a clubmate of Baker’s at the New Ashburn Golf Club won the Bantam Boys Championship by a large margin with scores of 73 and 78. Patrick Gamner from the Club de Golf Lotbiniere in Quebec was runner-up with scores of 82 and 82. One shot back from Gamner was Fox Creek’s own Jacob LeBlanc after shooting scores of 85-80.

As you can see, it was an exciting two days at the East Coast Junior Championship at the Covered Bridge Golf & Country Club. Covered Bridge will also be hosting the Golf Canada Future Links, driven by Acura, Atlantic Championship July 16-18th as well as, the Canadian Junior Boys Championship August 12-15th. We are so pleased that a Golf NB member club is hosting three major junior championships this year. Thank you to all involved at Covered Bridge for letting this happen at your beautiful course.