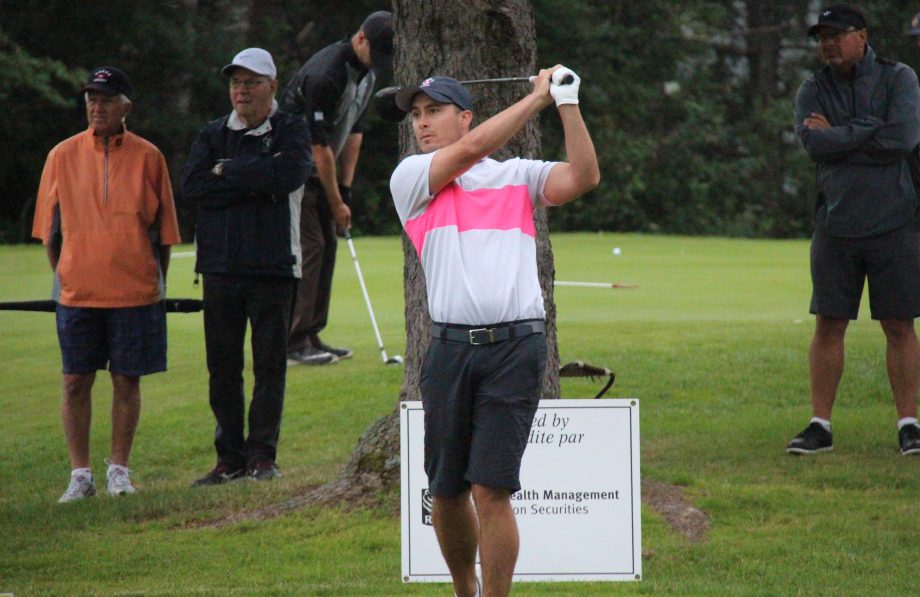 After carding a one under par (-1), 72, on Thursday, Roach entered Friday’s second round in fourth position two back of overnight leader Francois Hebert of the Memramcook Golf Club.  Wasting no time making his move up the leaderboard, by assaulting the Fraser Edmundston Golf Club’s five par 5’s.  A birdie on the par five third, an eagle at the par five 5th and another birdie on the par five 9th would see him make the turn in a sizzling four under par (-4), 33.

“This is my first time playing here”, said Roach.  “I like the golf course, you can hit driver, or you can layup, the golf course forces you to make a decision on every hole.”  While he likes the golf course, one this is certain, her really likes the par fives.  Roach would card another birdie at the par five 10th and his second eagle on the par five 11th before his lone bogey of the day at the 135-yard par three 12th.  Despite dropping a shot, Roach would rebound nicely, birdieing the par four 13th, which was moved forward some 15 yards on day two creating yet another “choice” for players.  With the low round of the day in hand, and the competitive course record of 64 insight, Roach would par out capping off an outstanding second round of play and with a two-shot lead through 36 holes.

Knocking on the door, three shots back, is perennial contender Michel (Mike) Landry of the Fredericton Golf Club.  After posting a two under par (-2), 71, on day one, Landry would do one better in round two posting a three under par (-3), 70 / 141, courtesy of a five birdie and two bogey performance.  One off the pace entering round two, Landry would birdie the par four 1st to draw even atop the leaderboard but would give the shot back on the par three 4th, before birdies at the 7th and 9th would get him to two under par (-2), 35, at the turn.  Two more birdies on #10 and #11, and a bogey at the 15th would help Landry close the gap on Roach and help to keep him within striking distance entering moving day.

In third position is 2019 MCT Insurance Nova Scotia Men’s Amateur Champion Calvin Ross of Kingswood Golf & JH Sports.  After birdieing each of the par 5’s in round one, Ross would be unable to replicate his success on day two.  Along with a bogey at the par three 4th, Ross would par the 3rd, birdie the 5th and a bogey at the 9th to make the turn in a one over par (+1), 38.  Despite struggling, by his standards, on the front side, Ross would make up ground in a hurry on his inward half.  A birdie at the 10th would get him started before Ross would use his biggest weapon, his length, to hit his tee shot to two feet on the “drivable” 321-yard par four 13th before converting the eagle and getting himself quickly to two under par (-2) on the day.  Another birdie at the par four 16th offset with a bogey at the last would help Ross post his second consecutive two under par (-2), 71 / 142, to sit four shots off the lead through two rounds.

First round leader Francois Hebert sits tied for fourth position with Stuart Musgrave of the Country Meadows Golf Club, at one over par (+1), 147.  While Hebert and Musgrave would give four shots and one shot back to the field respectively, 2018 NB Willingdon Cup Team Member Stuart Earle of the Westfield Golf & Country Club would fire a three under par (-3), 70, of his own to pull himself into a tie for 4th with Hebert and Musgrave.

Day three of the 2019 RBC Dominion Securities NB Men’s Amateur Championship gets underway on Saturday, July 13, 2019 at 8:00am.