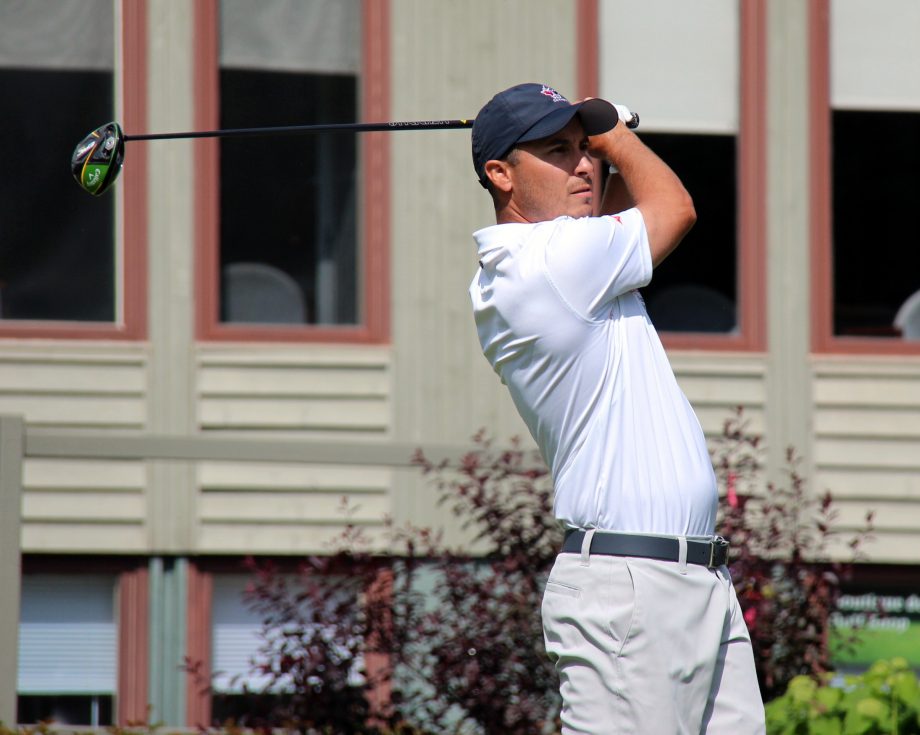 Entering Saturday’s third round of the 2019 RBC Dominion Securities NB Men’s Amateur Championship, at the Fraser Edmundston Golf Club, leaders Darren Roach of The Riverside Golf Club, Michel Landry of Fredericton Golf Club and Calvin Ross who represents Kingwood Golf and JH Sports would continue to dominate the field. Throughout their outward nine, Roach, by his standards, would show his first signs of struggle, bogeying the par four 1st and 6th, but with the help of his birdie on the par 5 third and by parring his remaining six holes, he would make the turn with his first over par side of the event, a one over par (+1), 38.  Roach’s inward nine would see the two time champion (2010, 2016) make 3 birdies at the 11th, 13th and 18th for a three under par (-3), 33, and a third round total of two under par (-2), 71/209.

Calvin Ross would also have a rocky start on day 3 with bogeys at the 1st and the 4th before getting the shots back by capitalizing on Fraser Edmundston two par 5’s as he has all week.  Birdies on the par five 5th and 9th holes would allow Ross to post an even par (E), 37, at the turn.  Ross` back nine would go on to showcase his abilities, as he would birdie the par five 11th, par three 12th and par four 17th.  He would end his third day with a three under par (-3), 70, his lowest score yet, bringing his three day total to seven under par (-7), 212, three shots off of the pace.

An uncharacteristically up and down first nine holes, would see the Fredericton Golf Club’s Michel Landry make the turn with an even par (E), 37, on the back of birdies at the 2nd, 5th and 9th offset by bogeys at #1, #7 and #8.  Landry would right the ship on the back nine carding 6 consecutive pars before getting himself to one under (-1) on the day with a  birdie at the par four 16th.  Another par at the 17th would see him looking to close the gap opened up by Roach and Ross, but a long approach into the Fraser Edmundston Golf Club’s narrow 18th green would cost Landry another shot and see him close out Saturday’s round with an even par (E), 73, and a three day total of five under par (-5), 214.

A two under par (-2), 71, on day three would help to break the Westfield Golf & Country Club`s Stuart Earle free of a three way tie, into solo 4th.  The McGill University golf product would get off to a bumpy start with bogeys at the 1st and 2nd, but a birdie on the difficult par four 7th would seem to kick start his round.  Despite bogeying the par three 8th, Earle would bounce back with an eagle, three, at the par five 9th to make the turn in with an even par (E), 37.  A birdie at the 10th and a bogey at the 11th would keep him even on the day, but consecutive birdies at the par three 12th, the par four 13th and 14th holes would get to three under (-3) on the round.  Another bogey at the 191 yard, par three 15th would be the final blemish on Earle`s card as he would get it to the house from there with three day total of one under par (-1), 218.

Rounding out the top five is the Country Meadows Golf Club`s Stu Musgrave.  Musgrave would card a one over par (+1), 74, on the day thanks to four birdies, three bogeys and one double good for a three day total of two over par (+2), 221.
The final round of the 2019 RBC Dominion Securities NB Men’s Amateur Championship gets underway on Sunday, July 14, 2019 at 8:00am off of the 1st and 10th tees, with the leaders teeing off in the final paring of the day at 9:20am off of the Fraser Edmundston Golf Club’s first tee.