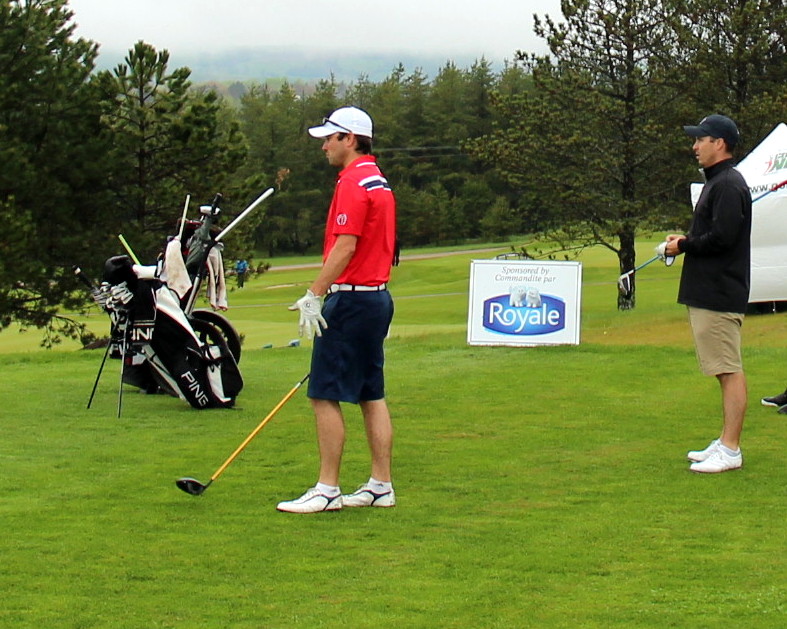 Second Round Pairings and Tee Times

It was an excellent morning for ducks at the 2018 NB Men’s & Senior Men’s Four Ball, held at the Sussex Golf & Curling Club.  Despite the early morning rain, Darren and Jason Roach of The Riverside Country Club jumped out to a four-shot lead in the Amateur Men’s Division with an 8-under par 64.

The Roach brothers carded a solid 2-under 34 on their first nine. Their back nine started with four straight birdies followed by an eagle on the par-5 14th which led to a 6-under par 30. Their only bogey of the day came on the difficult par-4 17th hole.

Alone in second place, and within striking distance, is the team of Greg Jones and Shawn Branch of Country Meadows with a score of 4-under 68. Branch and Jones got out to a great start on the front nine with a 4-under 32, including birdies on 1, 2, 7 and 9. Despite their fantastic opening nine, Jones and Branch would card two bogeys along with their two back nine birdies to come in with an even par 36.

Tied for 3rd with scores of 3-under 69 are the teams of Stephane Boudreau and Colin Manning of Moncton, Neil Roberts and Peter McCarthy of Westfield, Bob Brown and Tony MacKinnon of Fredericton, and Kris Leask and Duane Mitton of Sussex.

Current Low Net leaders in the race for the “Douglas Brewer Shield” are Kris Leask and Duane Mitton of the Sussex Golf & Curling Club, net 10-under 62. Putting the pressure on the round one leaders are Greg Jones and Shawn Branch of Country Meadows with a Net score of 9-under 63.

2017 Senior Men’s Champions Stephen Wilson and Dave Stewart of Sussex Golf & Curling Club currently hold a 3 shot lead at their home course after carding a 4-under 68. The pair started off the front and back nine with birdies and only dropped shots on the par 3 4th, and the par 4 17th.

In the net division it is Wilson and Stewart leading the way with a net 13- under 59.  A two way tie for second includes Ken Greenwood of Moncton Golf Club and Jim Haddad of Maplewood Golf Club, and Roger Leblanc and Eli Richard of Memramcook Golf Club who recorded a net 8-under 64. The Hampton Golf Club team of Robert McIntyre and Gary Swain round out the top four with an 18 hole Net score of 7-under 65.

Sunday’s Final Round of the NB Senior Men’s Four Ball will begin at 7:30am, followed by the Amateur Men’s Division at 9:20am.