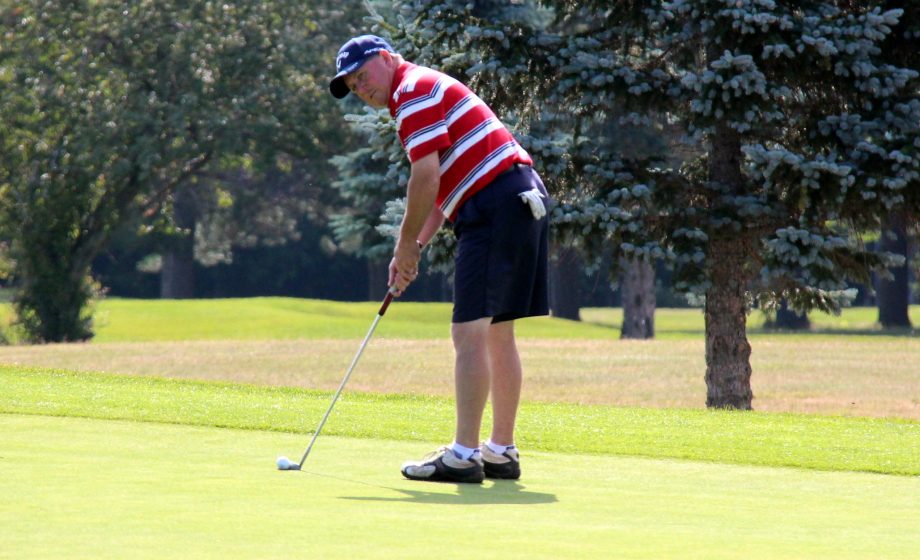 The morning would see Ed Reevey of The Riverside Country Club paired with familiar foes, Darren Ritchie of the Hampton Golf Club and Greg Jones of the Country Meadows Golf Club, as he set out in search of his fifth consecutive NB Men’s Mid-Master crown as he opened this year’s event off of Aroostook Valley’s 388-yard par four 1st hole.  After making par at the 1st, Reevey would bogey the second and eagle the par five 3rd to start what would be a rollercoaster of an opening 9 holes for the defending champion.  Another bogey at the 5th, a birdie at the 6th and a double bogey 5 on the par three 8th would see Reevey make the turn in a one over par (+1), 37.

While Reevey would show some wild swings, Ritchie’s outward nine holes would see more consistency.  A birdie on the par five 3rd a bogey at the 4th and another birdie at the par three 8th would see him make the turn in a one under par (-1), 35.

One stroke off the lead through 9 holes of play, Reevey would make a push beginning on the par five 12th.  A birdie there, would be followed by another on the par five 14th to get him under par on the round, but bogeys at the 15th and 18th holes would be offset by another birdie on the uphill 16th to see him close out his inward half with a one under par (-1), 35, and an opening round score of even par (E), 72.

For his par, Ritchie remained ever consistent as the two-time Men’s Amateur and 2006 NB Men’s Mid-Master Champion would par his first 6 holes of the back nine, before a bogey at the 16th would drop him back to even par on the round.  However, Ritchie would bounce back with birdies at the par three 17th and another on the par five 18th to enter the clubhouse with a first-round total of two under par (-2), 70, and a one-shot lead through 18 holes.

With Ritchie holding down top spot, and Reevey alone in 4th it is Darren MacPherson of the Restigouche Country Club and Stephen Clark of the host Aroostook Valley Country Club deadlocked in a tie for 2nd following a pair of first round, one under par (-1), 71’s.  Despite bogeying the 1st, MacPherson would bounce back with birdies at the 6th and 7th to make the turn at one under (-1), 35.  Bogeys on three of the next four holes, #10, #11 and #13 would be followed by a birdie run on the 14th, 15th and 18th to get into the clubhouse one back of Richie.  Clark would post his 71 by virtue of a bogeys at the 2nd, 4th and 7th offset by an eagle at the 3rd and birdies at the 5th and 18th.

The Fredericton Golf Club’s Tony MacKinnon, Kingswood Golf’s Brian Dalrymple and Riverside’s Mark Craik round out the top five with one over par (+1), 73’s, and in a three-way tie for 5th.

In the Senior Division (55+) it is Sonny Phillips of the Fredericton Golf Club leading the way after firing the low round of the day, a three under par (-3), 69.  Phillips would tear up Aroostook Valley’s front nine holes with birdies at the 2nd, 3rd, 6th, 7th and 8th on route to a blistering five under par (-5), 31.  Phillips would cool off significantly on the back however, as he would card seven pars and two bogeys (#12 and #17), to complete his three under par (-3) day and be the leader in the clubhouse.

Sonny’s lead would be short lived however, as Aroostook’s own Ralph Michaud would fire a 69 of his own.  Like Phillips, Michaud would get off to a hot start with an eagle on the par five 3rd, and birdies at the 6th and 7th offset by a bogey at the downhill par three 4th to make the turn in a three under par (-3), 33.  Michaud would also cool off on Aroostook Valley’s difficult inward nine.  A bogey at the 11th and a birdie on the par five 12th would be the movement he’d see as he’d cruise home with an even par back nine of 36 and a three under par (-3), 69 to tie Phillips for the lead, two shots clear of Fredericton’s Dan Coulombe and NB Senior Circuit Rookie Tom Cameron of the Gage Golf & Curling Club who sit tied for 3rd after carding a pair of one under par (-1), 71’s.

In the Super-Senior Division (65+ years of age) it is Phillips leading the way over two-time defending champion Herrick Hansen of the Aroostook Valley Country Club.  Hansen currently sits three shots back of Phillips with a first round even par, (E), 72 thanks to birdies on the 3rd, 15th and 18th holes which were offset by bogeys on #5, #8 and #10.  In third position is Gary Melanson of the Covered Bridge Golf and Country Club.  The crafty veteran would work his hickory shafted clubs around Aroostook’s up and down terrain to the tune of a two over par (+2), 74, that consisted of 16 pars and bogeys at the par three 13th and 17th holes.  Rounding out the top five is the pair of Jean LeBlanc of the Fox Creek Golf Club and Gary Swain of the Hampton Golf Club.  The pair would card matching three over par (+3), 75’s to sit tied for 4th in the Super Senior division, six shots off Phillips’ pace.

In addition to the Argus Audiology NB Men’s Mid-Master, Senior and Super Senior Championships titles, the third and final position on the Mid-Amateur Team NB will also be awarded.  The final team member will be joining Team NB that currently consists of Stuart Musgrave of the Country Meadows Golf Club and a yet to be named player, who will represent the province at the 2019 Canadian Men’s Mid-Amateur Championship, to be held from August 20 to 23, 2019 at the Summit Golf Club in Toronto, Ontario. 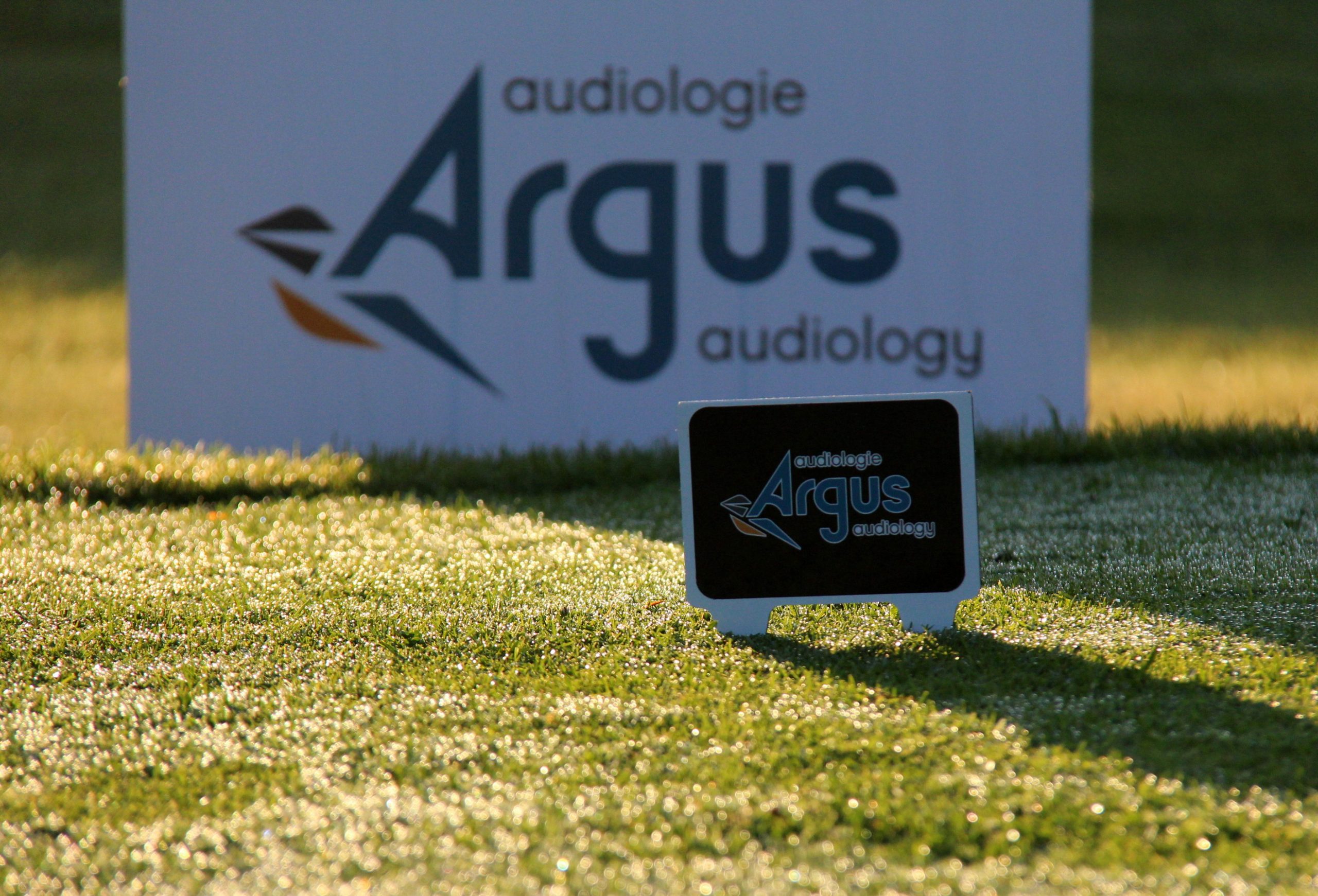