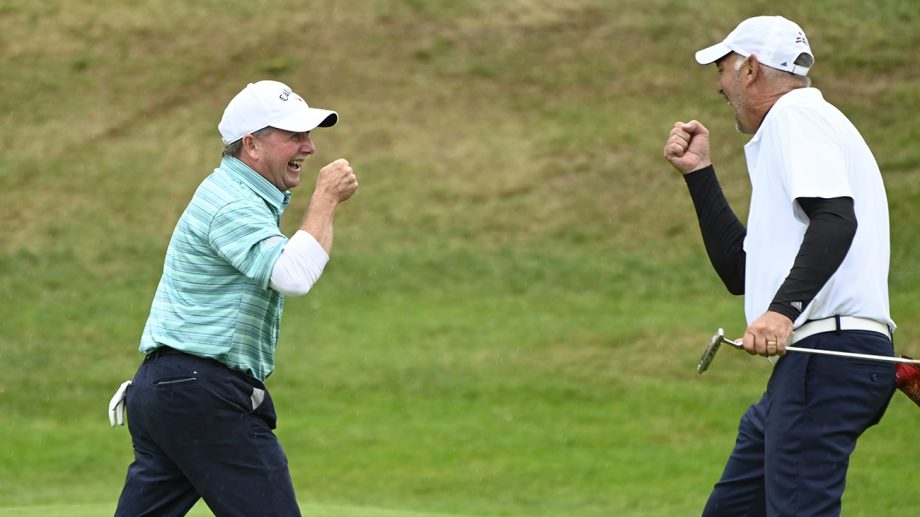 Darren Ritchie has often made history on the golf course, but his voice reaches new levels of pride when he talks about his 19-year-old son.

Nicholas Ritchie earned a spot on Sterling College’s varsity roster as a freshman this year and the Quispamsis native helped the Kansas school win its first conference championship.

Darren Ritchie, one of only four players to ever win Canadian amateur and senior men’s championships, will defend his New Brunswick senior title July 25-27 at the Mactaquac Golf Course.

Ritchie, who plays out of the Hampton Golf Club, also captured the Canadian Senior title last year – 29 years after he became the first Maritimers to win the national amateur crown by beating Mike Weir in a match-play playoff.

Ritchie, who was inducted into the New Brunswick Sports Hall of Fame in 2016, is more comfortable talking about his son’s success than his own legacy

“To play himself on the team at this age is incredible,” said Ritchie, a crane operator with Irving Equipment.

“He’s worked hard on his game and it’s all business with him,” he added.

“I’ve done well in the game and he’s making his way, too. In some ways, we’ve taken similar paths, but in other ways, he’s created his own opportunities.”

As teenagers, both Ritchies were outstanding athletes and had to choose between playing high-level baseball or focusing on golf.

“I’ve been very fortunate to play in New Brunswick,” said the 57-year-old, who also played competitive hockey and soccer in his youth.

“I believe Golf New Brunswick is the best golf organization in the country,” he continued. “I’ve been lucky enough to play across the country and I’ve seen how well-organized and professional they are here.

“Golf New Brunswick has always supported the players from this province. We are fortunate.”

Ritchie, who also finished third at the New Brunswick Senior Championship two years ago, is looking forward to this year’s tournament even though he hasn’t played much golf lately.

“I’ve been busy, but I enjoy the competition at these big tournaments,” he explained. “It’s a strong field and I thrive on going up against the best players.”

The tournament has attracted a capacity field of 156 players.

The top three New Brunswick finishers will represent the province at the Canadian Senior Men’s Championship, presented by BDO, Sept. 6-9 at the Red Deer Golf and Country Club in Alberta.

Ritchie topped the field last year while Tom Cameron of The Gage placed second and Mike Jeffrey of Fox Creek was third.

Jeffrey, a former pro hockey player who played with the Moncton Hawks and Nova Scotia Voyageurs of the AHL, also set a goal of winning the provincial title.

“I am competitive in everything I do and I’m not going there to finish second,” said Jeffrey, the Director of Operations for Corey Craig Group of companies.

“In hockey, I played my best against the good teams. In golf, my game improves against the best players so it’s going to be a great challenge,” said the 60-year-old Moncton resident.

The tournament will also feature Super-Senior and Mid-Master divisions.

Ritchie will also use the tournament to prepare for the United States Senior Men’s Golf Championship on Aug. 27-Sept 1 at the Kittanasett Golf Club in Marion, Mass.

He gained an exemption to the tournament by capturing the Canadian Championship last year.

“I am not playing much, but the tournaments I play will have very good players so that’s how I will prepare,” Ritchie said. “It’s an honor to represent New Brunswick and Canada.”