Richardson comes from behind to claim back to back Provincial Titles 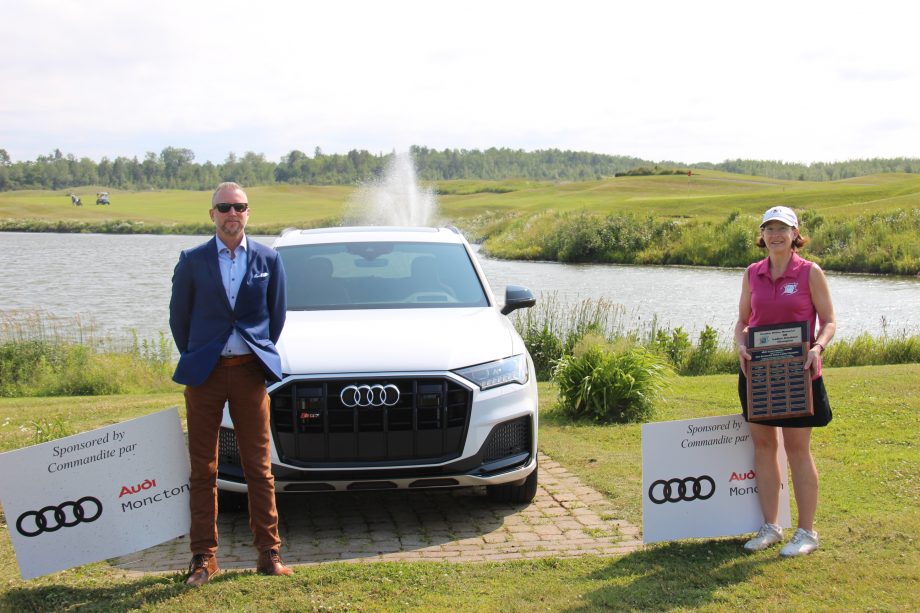 MONCTON, NB – With mother nature having her say on Tuesday’s proceedings, the second and final round of the NB Ladies Provincials, Driven by Audi Moncton shaped up to be a true test of championship golf.

Round 1 leaders in the NB Ladies Amateur, Mid-Amateur, Senior, and Super-Senior Divisions took to the course at 11:15 AM and were greeted by the natural defense of Royal Oaks, high winds, rolling fairways, deep bunkers, and tricky greens. Featured in the final pairings are the 2019 NB Ladies Provincial Champion, Leanne Richardson, and the 2018 NB Ladies Provincial Champion, Morgan Matchett.

The 2019 NB Ladies Amateur, Mid-Amateur, and Senior Champion would pick up where she left off on Monday. Battling the difficult scoring conditions, Richardson would go on to brace the wind and card a 7-over, 79 during Tuesday’s final round. A two-day total of 154, 10-over would give Richardson a four-shot cushion on her way to claim the 2021 NB Ladies Amateur, Mid-Amateur, and Senior titles. Finishing tied for second in both the Amateur & Mid-Amateur Divisions were Ashburn’s Cathy Donald whose rounds of 80 and 78 matched Miramichi’s Morgan Matchett’s opening round 73 and a final round score of 85. The two finished the event at 14-Over, one stroke ahead of the Fredericton Golf Club’s Maureen O’Donnell who finished in 4th.

In the Senior Division, Cathy Donald of the Ashburn Golf Club in Halifax, finished in solo second. Two strokes behind Donald was Royal Oaks’ own, Shelley Thomas who followed up her opening round 78 with an 82 in Tuesday’s difficult scoring conditions.

The chase for the NB Ladies Super-Senior Crown took all 36 holes as the 2018 NB Super-Senior Champion, Kathy Grebenc of the Gowan Brae Golf & Country Club, and Rockwood Park’s Pam Cossey went head to head for the 2021 title. Cossey’s 8-over, 80 in round one paired with her 82 in Tuesday’s final round would be enough to edge out Grebenc. The Bathurst native would card a final round 84, totalling 165, 21-over for 36 holes. Finishing in the Top-3 was the Fredericton Golf Club’s Mary Walton-Rossignol with a 36 hole total of 169, (87,82).

In the newly established, Platinum Division, Pokemouche’s Raymonde Boudreau captured the divisional title after two impressive rounds of 15-over, 87 and 20-over, 92. Her consistent play secured a 6 shot lead ahead of The Fredericton Golf Club’s Penny Dickeson who finished the 36 hole event at 41-over, 185 total. Rounding out the top 3 in the Platinum Division was Shelagh Eddie of the Gowan Brae Golf & Country Club who finished 2 shots back of her former clubmate after carding rounds of 91 and 96.

The platinum division features players aged 70 and older and has been a well-received addition to the NB Ladies Provincials.

The Dormie Workshop Par-3 Challenge highlights the best scores on all Par-3’s during the course of the Championship. The 2021 NB Ladies Provincial Championship proved to showcase some elite iron players. Country Meadows’ Sandy Comeau and Ashburn’s Cathy Donald both finished the 36 hole event at 1-over Par on the Par-3’s, a score good enough for the pair to share the crown of Dormie Workshop Par-3 Challenge Winners.

Scott Killen, General Manager of Audi Moncton and Presenting Sponsor of the 2021 NB Ladies Championship was on hand to assist in honoring Golf NB’s Champions. A golfer himself, Scott and Audi Moncton are proud to be in partnership with Golf New Brunswick and assist in growing the game.