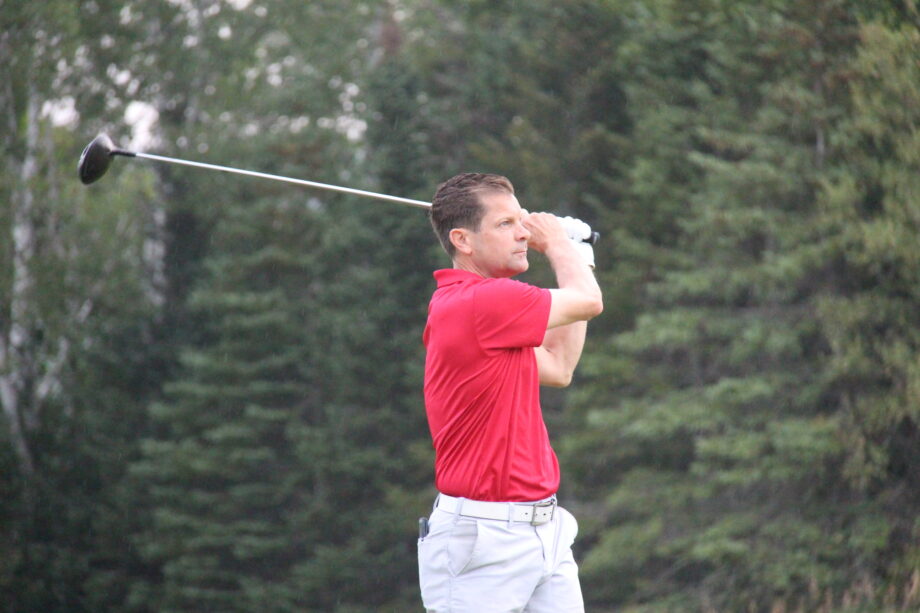 MACTAQUAC, NB: A sunny and warm morning just outside the province’s capital greeted players for the opening round of the 46th NB Men’s Senior & Mid-Master Championships. 154 players converged at the Mactaquac Provincial Park Golf Course for this year’s event as many looked to challenge for the Mid-Master, Senior & Super-Senior titles.

Monday’s opening round began at 7:00 AM with the Mid-Masters and part of the Seniors leading the fields off of #1 and #10. Game #1 featured Riverside’s Ed Reevey and Eric Babin of the Miramichi Golf & Country Club, followed shortly after by 2021 Men’s Mid-Master Champion, David Russell, and Avondale’s Steven Gamester. Off hole #10 at 7:10 AM was 2021 New Brunswick and Canadian Senior Men’s Champion, Darren Ritchie of the Hampton Golf Course, accompanied by the 2021 NB Super-Senior Champion, Paul Batchelor of Ashburn, and fellow Nova Scotian Jacques Legere.

Leading the field in the NB Mid-Master Championship is Ed Reevey of the Riverside Country Club who played an amazing bogey-free round of 4-under par, 68. Reevey currently sits 3 shots ahead of Riverside partners David Russell and Jason Doyle, both players would go on to shoot a 1-under par, 71. Not far behind them is Kevin McAllister of the Miramichi Golf & Country Club who shot an even-par, 72, we also had Scott Weatherhead and Len Currie who both fired a 1-over par, 73.

For the Senior division, we saw Paul Batchelor of the Ashburn Golf Club who came out and fired a smooth, bogey-free round of 5-under par, 67. In a close second place, we have Jacques Legere of the Nova Scotia Public Players Club who fired a tidy 4-under par, 68 with help from an albatross on the par-5 15th hole! Not far behind them are seven other players in a tie for third players who would all score a 1-under par, 71 for the day.

Batchelor’s play sees him also take the top spot in the Super-Senior Championship, the Nova-Scotian is currently sits in a 5 shot lead over Robert McIntyre who fired an even-par, 72. In a tight and close tie for third place, we have Kevin Farmer of the Herring Cove Provincial Park, Sonny Phillips of the Fredericton Golf Club, and Wilfred Pilgrim of the Kingswood Golf Club. The three players would finish the day with a score of 1-over par 73.

The Dormie Workshop Par-3 Challenge highlights the best scores on all Par-3s during the course of the Championship. The NB Mid-Master division sits at a current 5-way tie with Steven Gamester of the Avondale Golf Course, Scott Weatherhead of the Welsford Golf Course, Jason McAllister of the Miramichi Golf & Country Club, Jason Doyle and Andrew King both from the Riverside Country Club, all five players would score a 1-under par for their performance on each par-3 hole that Mactaquac had to offer. Leading the pack in the Senior division, we have Rob Black of the Fredericton Golf Club who fired a score of 2-under par.

Round 2 begins on Tuesday, July 26th at 7:00 AM with the Senior field leading the way, followed by the Mid-Masters. To follow along with the action, use GGID: NBSRMID.