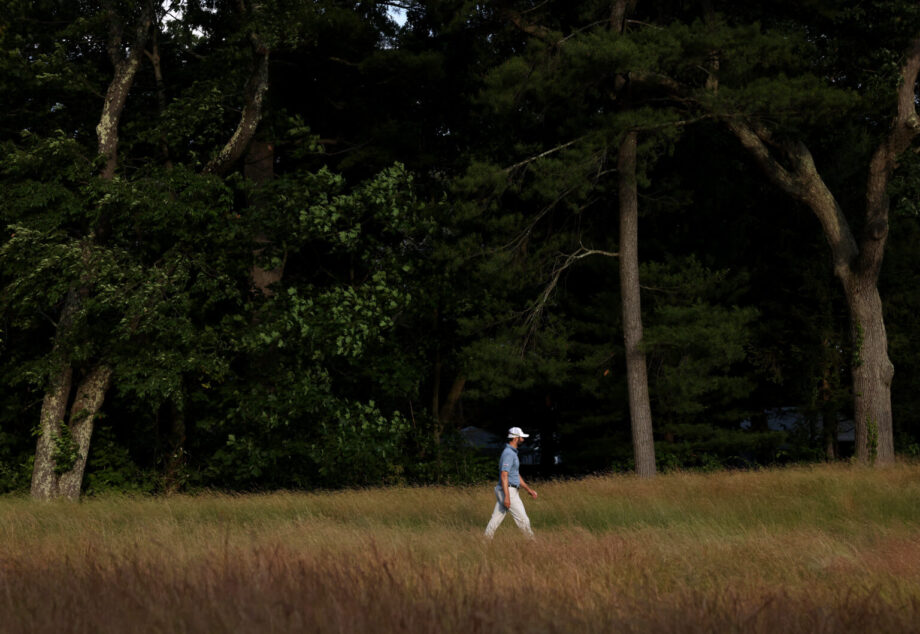 Brookline, MA - June 16: Adam Hadwin walks down the fairway of the 17th hole. The first round of the US Open begins at The Country Club in Brookline, MA on June 16, 2022. (Photo by Jessica Rinaldi/The Boston Globe via Getty Images)
Golf New Brunswick

Whether it was Adam Hadwin earning his best-career major championship result or Roger Sloan and Ben Silverman playing in their first-ever majors, the 2022 U.S. Open was quite the week for the Canadian crew on the PGA Tour.

And it was extra special in 2022, as it followed the return of the RBC Canadian Open.

Hadwin led the way – his tie for 7th came after he held the first-round lead, and he ended up just five back of Matt Fitzpatrick’s 6-under 274 winning effort – but the six-pack of Canadians at The Country Club all took plenty away from the major stage.

Six Canadians in the field at the U.S. Open was the second-most of all time. Seven teed it up at Torrey Pines in 2008, while five were in the field at Merion in 2013. Hadwin and Mackenzie Hughes found the weekend, with Hughes hanging tough and finishing tied for 24th.

While Conners, Silverman, Sloan, and Nick Taylor had early exits, there was still much to take away from the week.

“There is a lot going on around here,” said Silverman with a big smile on Thursday. “This is a massive venue. I’ve never seen crowds like I did on Tuesday and Wednesday… you’re getting applause for shots on those days. It’s just a ton of people, all the top players in the world are here.”

Silverman, who is working his way back to the PGA Tour via the Korn Ferry Tour this season, earned a spot into the U.S. Open via a qualifier (in fact, all the Canadians got through the same Dallas qualifier save Conners, who had already locked up a spot). But just because he isn’t teeing it up alongside the best in the world every week that doesn’t mean he felt out of place.

Sloan, who missed the cut at the RBC Canadian Open and ended up arriving in Boston a few days early (his family decided to follow him around the U.S. Open versus the Canadian Open and they did plenty of fun Boston things, like going to Fenway Park and seeing the Boston Red Sox from seats atop the ‘Green Monster’) and then got down to business on Wednesday.

“Playing your first U.S. Open and seeing the magnitude of this… it’s been real neat,” said Sloan. “It’s been so much fun. I have family here and we’ve just been soaking it in.”

Sloan rallied after a tough opening 6-over 76 to shoot an even-par 70 on Friday. He said he’s drawn inspiration from Conners, Hughes, and Hadwin and the success his countrymen have had recently on some big platforms in the game.

“That’s what we’re working towards. I’ve been five years on the PGA Tour and that next step is following Mac and Adam and Corey and the guys who are playing 3-4 majors in a year and The Players Championship… that’s the next step for us,” said Sloan. “We’ll just kind of build on our game and get there.”

Conners was a pre-tournament favourite as he made the semi-finals of the U.S. Amateur when it was contested in 2013 at The Country Club (he joked during a practice round that he didn’t remember much of 17, and certainly 18, because he never saw those holes during his matches). He missed the cut by a shot but still moved up to 29th in the world – his highest-ever ranking.

“I feel like my game was much better than a 3-over-par round,” he said Friday. “You can do a lot of things well, but the course can still beat you up a little bit.”

Hadwin, however, held on tight over the weekend.

His top-10 was his fifth of the season. His previous best result at a major was a tie for 24th, which came at the Masters in 2018. Hadwin played with Scottie Scheffler, the world’s top-ranked male golfer, on Sunday in the third-to-last group.

He rose to the moment and knocked in back-to-back birdies on No’s 16 and 17 late Sunday. He was disappointed to close with a bogey and finish at 1 under for the week, but on a tough course and on a big stage, he’ll happily take that.

“Just based on the way I was playing I just wasn’t ready to go attack and start moving up the leaderboard so I just stayed patient and do the best I could. It was nice to get a couple there on 16 and 17,” said Hadwin. “Eighteen stings a little bit, but I’m under par at a U.S. Open for four days and that’s not too bad.”

The 2022 U.S. Open was a Major week after a major week for the Canadians, but between Hadwin’s fabulous finish and the confidence-building debuts of Silverman and Sloan there was plenty of positives to take away from The Country Club.