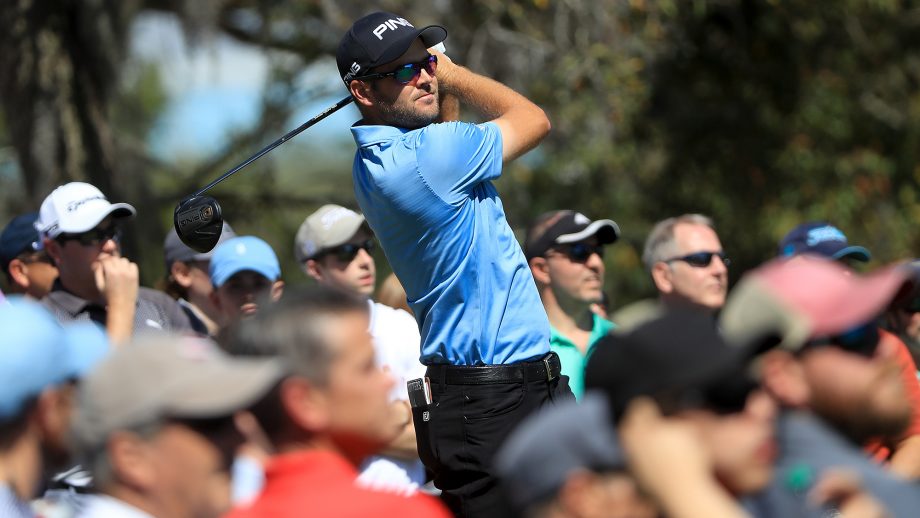 PALM HARBOR, FL - MARCH 11: Corey Conners of Canada plays his shot from the fifth tee during the final round of the Valspar Championship at Innisbrook Resort Copperhead Course on March 11, 2018 in Palm Harbor, Florida. (Photo by Sam Greenwood/Getty Images)

PALM HARBOR, Fla. – A long victory drought on the PGA TOUR finally ended Sunday, just not the one a raucous crowd was expecting.

Paul Casey closed with a 6-under 65 and won the Valspar Championship, but only after watching from the locker room as Tiger Woods came up one putt short of forcing a playoff. It was the closest Woods has come to winning in nearly five years.

Casey, who started the final round five shots behind, ran off three straight birdies early on the back nine at Innisbrook to take the lead, and he closed with four par saves to post at 10-under 274.

No one caught him, giving him his second PGA Tour title and his first since the Houston Open in 2009.

Patrick Reed was tied for the lead and appeared headed for a playoff at worst until his approach to the 18th came back down the slope, and his 45-foot birdie putt was so weak that it rolled all the way back to his feet . He three-putted for bogey and a 68.

Woods and his massive following went dormant after an opening birdie to briefly share the lead. He went 15 holes without a birdie until he brought Innisbrook to life with a birdie putt from just inside 45 feet that died into the cup at the par-3 17th, leaving him one shot behind with one hole to play.

Woods played conservatively with an iron off the 442-yard, uphill closing hole on the Copperhead course. From 185 yards, his approach came up some 40 feet short, and his birdie putt to force a playoff was 2 feet short.

He closed with a 70 – the first time since The Barclays in 2013 that he posted all four rounds under par on the PGA TOUR – and tied for second. That was his best finish since he tied for second at that Barclays tournament, right about the time his back started to give out.

Casey had gone 132 starts on the PGA Tour since winning in Houston, though he had won five times worldwide, including the European Tour’s flagship event at the BMW PGA Championship. He had seven top 5s in the FedEx Cup playoffs over the last three years.

Someone always played better – until Sunday.

Corey Conners, the Canadian rookie who started the final round with a one-shot lead, fell back quickly after opening with a bogey on the easiest hole at Innisbrook. He shot 77 and tied for 16th.

Thanks for the thrilling run, @coreconn – ?? is proud of you!

Until the next time! ? pic.twitter.com/fWJtzGTZ1H

Defending champion Adam Hadwin of Abbotsford, B.C., closed with a strong 3-under-par 68 to finish tied for 12th at 4 under.

Woods looked closer than ever to winning in his remarkable return from fusion surgery on his lower back last April. Each week has been a little better. He has been a factor on Sunday the last two tournaments, and a gallery that stood 10-deep around just about every green could sense it.

He just couldn’t deliver after a two-putt birdie on the par-5 opening hole.

“I didn’t feel that sharp with my iron game,” Woods said. “I played conservatively into the green because I wasn’t as sharp as yesterday. It was one of those days I kept getting half-clubs.”

He missed birdie chances on both par 5s on the back nine, pulling a wedge into the rough at No. 11 and three-putting from 80 feet on No. 14. He missed a couple of putts in the 15-foot range. And right when it looked as though he was out of chances, he ran into the 45-foot birdie putt to keep everyone guessing.

Next up for Woods is the Arnold Palmer Invitational at Bay Hill next week, which he hasn’t played since winning five years ago. He is an eight-time winner at Bay Hill, and the euphoria over his return is sure to reach even higher decibels.

“I keep getting a little bit better,” Woods said. “I had a good shot at winning this golf tournament. A couple putts here and there, it could have been a different story.”

Reed will look back on one putt.

He opened with a 60-foot eagle putt that slammed into the pin on No. 1 and was never far from the lead, tying Casey with a bold fairway metal onto the fringe at the 14th that set up birdie. He was in the middle of the fairway on the 18th. He twirled his club when the ball was in the air.

And then it all went wrong.

The putt up the hill never had a chance, and when it started rolling back at his feet, Reed beckoned it with his right hand. He used a wedge on the fourth shot, knowing he had to hole it for par to force a playoff.

That left Casey the winner, finally.

The 40-year-old from England had reason to believe his hopes ended on Saturday when he hit into the water on the 16th and made double bogey, falling five shots behind. He answered Sunday with all eyes on someone else – Woods – by going out in 33, and then getting rewarded for aggressive play. He got up-and-down from a bunker short of the green at No. 11 for birdie, stuffed his approach to a foot on No. 12 and then holed a 20-foot birdie from just off the green at No. 13.

Justin Rose, among six players who had a share of the lead at some point in the final round, had back-to-back bogeys on the back nine and never atoned for his mistakes. He closed with a 72 and finished three shots behind.