“Parr” Leads the Way at the 2019 East Coast Junior Championships 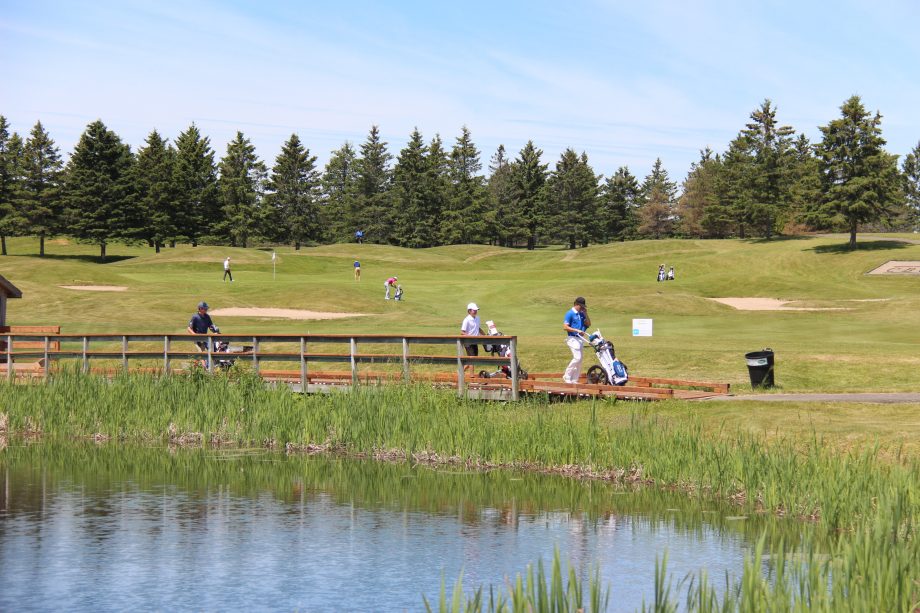 and Country Club in Hartland. The golf course is in great shape with the Superintendent, Mathew Harris and his greens crew applying tender loving care after a harsh New Brunswick winter. 34 players from the host province of New Brunswick, 29 players from Quebec, 17 from Nova Scotia and 16 who crossed the Confederation Bridge helped to the 2019 field one of the strongest in years.  The Championship is played over 36 holes with the final round slated to start tomorrow at 8:00 am. Three champions will be named tomorrow in the Junior Boys, Junior Girls and Bantam Boys divisions.

Jean-Phillip “Under”) Parr was just that as he fired a blistering 4-under par 68!  His 2-under start on the front nine included birdies on holes 4, 6 and 8 with a bogey on the par three number 7. Parr would match his 2-under score on the back nine with birdies on holes 15 and 18 to go along with his 7 pars. When asked what the best part of his game today was, Parr replied, “My iron play was very good today so I hit a lot of greens in regulation. I had a lot of looks at birdies, I missed a few but I really like the course.”  One shot back is Truro Golf Club’s Owen Mullen with a birdie, bogey, birdie start followed by 6 straight pars on the front. Mullen would keep his great play going with birdies on 10 and 11, pars on the next 3 holes and finished bogey, par, birdie for a 2-under 34 on the back for a total of 69. Kieran Allain from the Old Course at Ashburn in Halifax, Nova Scotia and Raphael Lebrun from Lorette Golf Club both shot 2-under 70’s.

New Brunswick’s own Brayden Sappier from the Woodstock Golf & Curling Club was even par on the front nine with 9 straight pars. His

back nine comprised of 2 birdies, 4 pars and 3 bogeys for a 1-over 73 on the day. The Miramichi Golf & Country Club’s Nathan Hogan had 9 straight 4’s on his scorecard for an even par 36 on the front nine. He broke that string of pars with a bogey on number 10 and added another one on 13 for a 2-over par 38 to finish with a 74.

In the Bantam Division, Gavin Ives from the New Ashburn Golf Course in Fall River, Nova Scotia shot an even par 36 on the front thanks to a clean card that consisted of 9 consecutive pars. Ives would closed with a 1-over par 37 on his inward half, a stretch that contained 2 birdies, 3 bogeys and 4 pars for a very respectable 73 on the day.  Ives has an 8-shot lead over Félix Poulin from the Sainte-Marie Golf Club.

24 girls have come to Covered Bridge G & CC to try to claim the Junior Girls title and there is a three-way tie at the top.  Haley Baker from New Ashburn in NS had a one over 37 on the front with a birdie 2 on number 4 and bogeys on holes 6 and 9. The wind came up on the back nine and Haley turned in a 40 for a first-round score of 77. Tied for top spot is Haley’s sister, Abby, who was 2 over (38) on the front nine and showed her power by almost driving the 279-yard third hole and the 295 yards eighth hole! Impressive yardage for a 14-year-old! Her 6 pars and 3 bogeys on the back added up to a 39 for her 77. Sarah Holt from the Gage Golf & Curling Club in Oromocto rounds out the 3 players on top. She had 2 birdies, 4 pars and 3 bogeys for her 1-over par 37 on the front. Holt had 6 pars on the back partnered with 2 bogeys and an unfortunate double on the final hole to add up to 40 to make her total of 77. One shot back with a 78 is Anne-Sophie Bélanger from the Royal Quebec Golf Club.

Tomorrow will be an exciting day here at the Covered Bridge Golf & Country Club for the conclusion of the 2019 East Coast Junior Championship. Three champions will be crowned and there are lots of players wanting those titles.