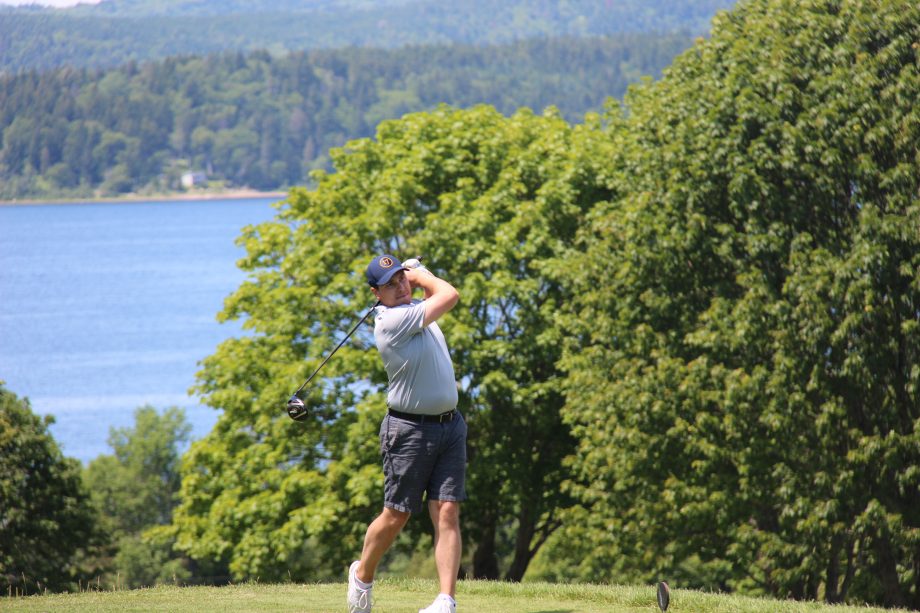 Day two of the 2018 RBC Dominion Securities Men’s NB Amateur Championship marked another perfect day for golf as limited wind combined with the immaculate condition of The Riverside Country Club would lead to some movement on the leaderboard.

Round 1 leaders, Mike Landry of the Fredericton Golf Club and Nick Earle of Westfield Golf & Country Club would begin their second rounds at 10:40 and 11:20 just as the heat set in on The Riverside Country Club. The two continue to lead the field after their second rounds as the pair both recorded even-par 72 rounds. Earle’s 72 consisted of 4 bogeys, 1 double, 4 birdies, 1 eagle and 8 pars while Landry carded 10 pars, 4 birdies and 4 bogeys.

Rounding out the top three of the leaderboard after his spectacular second round of 68 is The Riverside Country Club’s Alex Palmer. Palmer took advantage of his home course knowledge and maneuvered the quick greens to record the low round of the day. Alex’s 68 included 12 pars, 5 birdies and 1 bogey.

The top three finishers, along with the fourth-place alternate, in the Men’s Amateur section, will earn the opportunity to be members of Team NB and represent New Brunswick in the Willingdon Cup at the Canadian Men’s Amateur Championship, to be held from August 6 to 9, 2018 at Duncan Meadows Golf Course & Pheasant Glen Golf Resort in Duncan / Qualicum Beach, British Columbia. In addition to the Provincial Championship and the four positions on Team NB, Golf NB will also be allocating an additional five exemptions into the Canadian Men’s Amateur Championship to top finishers at this year’s event.

In addition to the positions on the Willingdon Cup Team, the top two finishers in the NB Mid-Amateur category (25 years and over) will earn positions on Team NB that will represent the province at the 2017 Canadian Men’s Mid-Amateur Championship, to be held from August 21 to 24, 2018 at the Victoria Golf Club in Victoria, British Columbia. The third and final position on Team NB, along with the first alternate position, will be awarded later this month at the 2018 NB Mid-Master Championships, to be held at the Royal Oaks Golf Club from July 23 to 25, 2018.

The third round of the 2018 RBC Dominion Securities NB Men’s Amateur Championship will get underway at 7:30am on Saturday July 14th, with competitors all going off the first tee.

For more information on the The Riverside Country Club please visit: CLICK HERE.