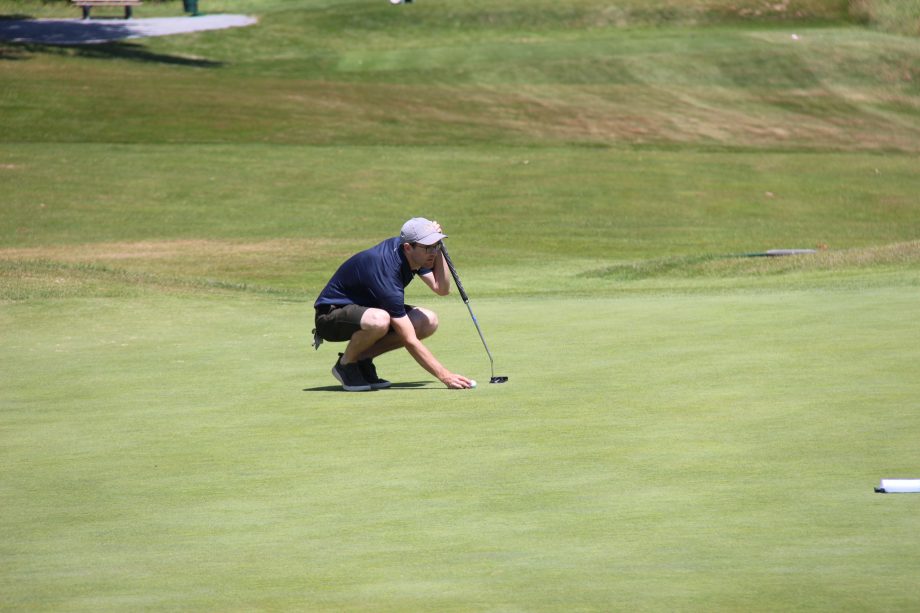 “Moving Day” at the 2018 RBC Dominion Securities Men’s NB Amateur Championship brought difficult scoring conditions as 74 of the provinces best looked to make a final push ahead of Sunday’s final round.

It was The Riverside Country Club’s Alex Palmer who’s third round 3-under par 69 moved him to the top of the leaderboard. Palmer started the round at even-par in third place sitting a few shots behind the co-leaders Nick Earle of Westfield and Mike Landry of Fredericton. Claiming his second low round of the event gave him the gap to switch up the leaderboard rankings, resulting in Earle and Landry in a two-way tie for second place. Alex’s Saturday 69 included 10 pars, 4 birdies, 1 eagle and 3 bogeys.

In second place is Mike Landry of Fredericton and Nick Earle of Westfield who both felt the effects of the heat on The Riverside’s firm and fast greens. Landry finished his third round with a 2-over par 74 moving his three-round total to 2-under par. His 74 consisted of 10 pars, 3 birdies and 5 bogeys. Landry’s bogey trouble started on the tail end of the back nine with holes 5,6 and 7. Nick Earle who started the round with high hopes of building off of his previous 68 and 72 was also met with difficult playing conditions starting with a double bogey on the par-4 1st. Nick has matched Landry’s score every round thus far as he also recorded a 2-over par 74 during round 3.

The fourth and final round of the 2018 RBC Dominion Securities NB Men’s Amateur Championship will get underway at 7:30am on Sunday July 15th. The pairing of Alex Palmer, Mike Landry and Nick Earle will round out the final group of Sunday’s round at 12:10 off of The Riverside’s first tee.

The top three finishers, along with the fourth-place alternate, in the Men’s Amateur section, will earn the opportunity to be members of Team NB and represent New Brunswick in the Willingdon Cup at the Canadian Men’s Amateur Championship, to be held from August 6 to 9, 2018 at Duncan Meadows Golf Course & Pheasant Glen Golf Resort in Duncan / Qualicum Beach, British Columbia. In addition to the Provincial Championship and the four positions on Team NB, Golf NB will also be allocating an additional five exemptions into the Canadian Men’s Amateur Championship to top finishers at this year’s event.
In addition to the positions on the Willingdon Cup Team, the top two finishers in the NB Mid-Amateur category (25 years and over) will earn positions on Team NB that will represent the province at the 2017 Canadian Men’s Mid-Amateur Championship, to be held from August 21 to 24, 2018 at the Victoria Golf Club in Victoria, British Columbia. The third and final position on Team NB, along with the first alternate position, will be awarded later this month at the 2018 NB Mid-Master Championships, to be held at the Royal Oaks Golf Club from July 23 to 25, 2018.