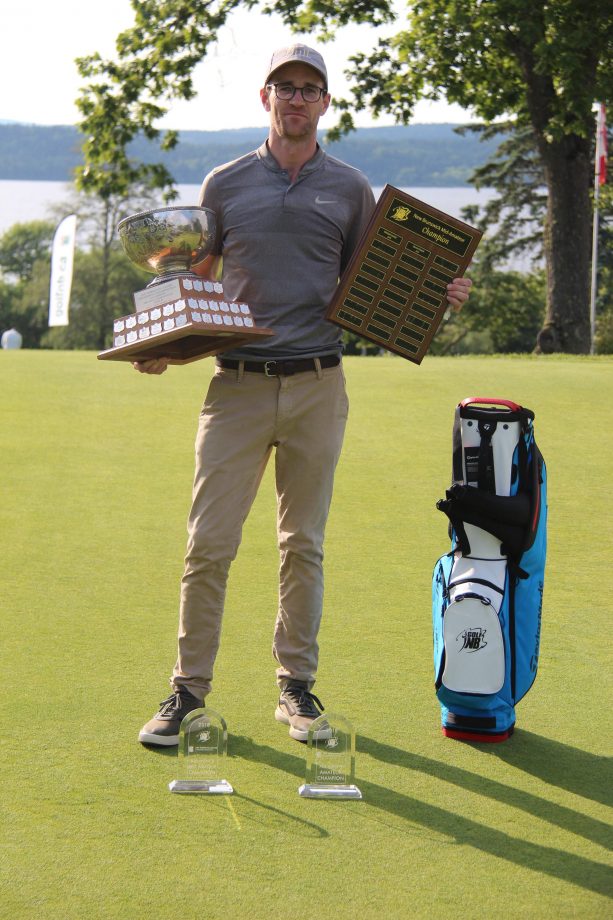 The final round at the 2018 RBC Dominion Securities Men’s NB Amateur Championship would turn into an exciting finish as three of New Brunswick’s best amateur golfers battled through 21 holes until a winner was finally crowned.

It was Alex Palmer who came out on top after 72 holes and an additional 3 playoff holes of difficult and challenging golf at The Riverside Country Club. Palmer entered the final round one shot ahead of playing partners Nick Earle of Westfield and Mike Landry of Fredericton. The trio exchanged birdies, pars and bogeys during the final round only to remain deadlocked at 4-under par after the final 72nd hole. In an entertaining and highly skilled playoff it came down to 18 where Palmer secured his first RBC Dominion Securities NB Men’s Amateur & Mid-Amateur Championships in front of his home club fans. Palmer finished the final round with a 1-under par 71 to round out his event total of 284.

Finishing in second place is Mike Landry of Fredericton whose efforts in the playoff were magnificent, however not enough to stay ahead of Palmer. Landry rounded out the event with a 2-under par 70 to go along with his previous, 68, 72 and 74.

Rounding out the top three is Nick Earle of Westfield whose final round push of 2-under par 70, was enough to keep him in contention and join Landry and Palmer in the playoff. Earle’s stellar play throughout the week earned him a spot-on Team NB to represent the province at the 2018 Canadian Amateur Championships. Nick’s performance was followed up closely by his younger brother Stuart who finished 4th with a total of 2-over par, 290.

In the Mid-Amateur Division, placing behind Palmer and Landry is 2017 RBC Dominion Securities NB Men’s Amateur & Mid-Amateur Champion Darren Roach of The Riverside Country Club who finished at 11-over par. In 5th is 2018 Willingdon Cup team member Ryan Allaby of Hampton who’s 12-over par total earned him an opportunity to represent NB at the 2018 Canadian Mid-Amateur Championships.

In the Men’s Amateur section, Sam Reid of Royal Oaks, Stuart Earle and Nick Earle of Westfield earned the opportunity to be members of Team NB and represent New Brunswick in the Willingdon Cup at the Canadian Men’s Amateur Championship, to be held from August 6 to 9, 2018 at Duncan Meadows Golf Course & Pheasant Glen Golf Resort in Duncan / Qualicum Beach, British Columbia.

Newly appointed members of the Willingdon Cup Team are The Riverside’s Alex Palmer and Ryan Allaby of Hampton have earned positions on Team NB that will represent the province at the 2018 Canadian Men’s Mid-Amateur Championship, to be held from August 21 to 24, 2018 at the Victoria Golf Club in Victoria, British Columbia. The third and final position on Team NB, along with the first alternate position, will be awarded later this month at the 2018 NB Mid-Master Championships, to be held at the Royal Oaks Golf Club from July 23 to 25, 2018.