Over $35,000 Raised at the NB Golf Fore the Cure Event at Petitcodiac 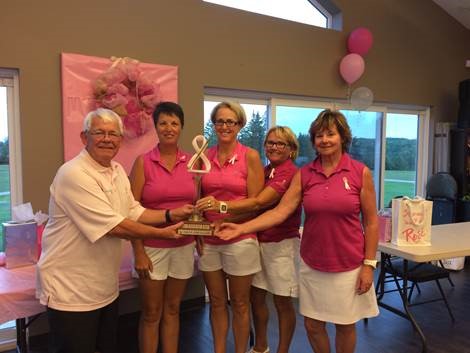 To sum up the 2019 Golf Fore the Cure (GFTC) at the Petitcodiac Valley Golf & Country Club, it had beautiful weather, great friends, a super-conditioned course, a wonderful sponsor in John Brown and Service Master Restore and of course, awesome fundraising efforts.  This year the NB Golf Fore the Cure raised $35,183.97 (with some money still coming in) for breast cancer research!  All of the donations will be forwarded to the NB (Saint John) office thereby confirming “all money raised in NB stays in NB”. Just a statistical fact from today:  In the 1960s the cancer survival rate was 25%; today breast cancer survival rate is 87%.  WE ARE MAKING A DIFFERENCE!!!!  Thank you for helping make this difference.

The winning team of Nicole Heppell, Darlene Comeau, Linda Daigle, and Odelie Doucet from the Lakeside Golf & Country Club won in a three-hole sudden-death playoff culminating with “closest to the pin” from 150-yard marker on #1 hole. What an awesome, exciting, and nail-biting finish!!!  It was the Woodstock team of Angela Welch, Jocelyn Keirstead, Pauline Pelkey and Crystal Brown that also shot 66 to battle for the title. Congratulations to both teams for such wonderful golf and best of luck to the Lakeside team as you journey to Mississauga, Ontario for the national event.

A special note that the Sponsor’s team of the John Brown, Don Dougherty, Daryl McCully and Judy Astle also shot a 66. The question is: did Judy carry the team? Great score, team!!

Each year the top 3 fundraising sites in Canada get an invitation to the Golf Fore the Cure presented by Subaru National Event, this year it is being held at the Credit Valley Golf & Country Club in Mississauga, Ontario. If the $35,183.97 total is within the top 3 national amounts than the team from Pine Needles will be packing their golf bags to play there.

A special thank you goes to Marilyn Pollock, the GFTC Tournament Chair, who along with her committee organized this whole event. Marilyn is a great person to have at the helm as she is so passionate about this tournament and always gives 110% of her efforts! Golf Fore the Cure NB is so fortunate to have Marilyn Pollock as their leader!