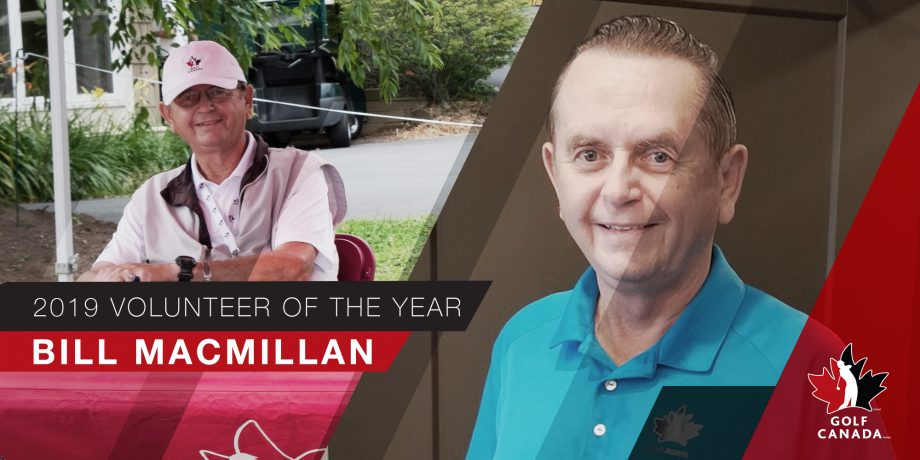 <![CDATA[<strong>Oakville, Ont. (Golf Canada) – Golf Canada is pleased to announce that Bill MacMillan of Eastern Passage, N.S. has been named the 2019 recipient of the Bruce Mitchell Volunteer of the Year Award. A golf tournament official and major contributor to Handicap and Course Rating for more than three decades, MacMillan will be acknowledged during a dinner on Friday, February 28 as part of Golf Canada’s 2020 Annual Meeting at the Hilton Toronto Airport Hotel in Mississauga, Ont.

“Volunteers are the driving force behind the success of golf in this country and we are proud to recognize Bill MacMillan for his deep contributions to support the game of golf in Nova Scotia and at the national level,” said Golf Canada President Charlie Beaulieu. “Bill’s contributions to the sport, especially in the important areas of Rules, Handicapping and Course Rating have had a major impact and it is fitting that his efforts through volunteerism are being recognized.”

Beginning in 2020, Golf Canada has renamed its annual volunteer citation the Bruce Mitchell Volunteer of the Award in recognition of Toronto native Bruce Mitchell who in 2017-18 was the first Canadian to serve as captain of the Royal and Ancient Golf Club of St Andrews (R&A). Born in Victoria and raised in Edmonton, the former president of the Toronto Golf Club and R&A member since 1988 became just the ninth internationally appointed captain of the R&A, one of the most prestigious volunteer positions in the world of golf. Duties as captain included representing the R&A as a global ambassador and aiding in the R&A’s effort to develop golf around the world. [caption id="attachment_96201" align="alignnone" width="1024"] Bill MacMillan and former Golf Canada president Roland Deveau[/caption] “Each year in Canada and around the world, thousands of committed volunteers are helping to support the game. Renaming our volunteer citation the Bruce Mitchell Volunteer of the Year Award is a fitting way to celebrate the distinction of Bruce’s selection as R&A captain and pay tribute to a Canadian volunteer who impacted the game both in the community and at a global level,” added Beaulieu. Now in its 14th year, candidates for the Bruce Mitchell Volunteer of the Year Award are put forth to Golf Canada for consideration by the respective provincial golf associations in acknowledgment of significant contributions to the game of golf in their community.

For more than 30 years, Bill MacMillan has been a significant contributor to the Nova Scotia Golf Association (NSGA) working tirelessly as a Referee, Course Rater, and a board member at the Provincial and National levels. Since 1985, he has served on the NSGA Executive Committee, working as an assistant on Rules, Handicap and as the Chair of the Course Rating committee, a position he holds to the day. In 1995 he became the first elected Vice-President of the NSGA and a year later was elected as President of the association. During his tenure, he assisted in establishing the NSGA Player of the Year points system as well as the founding the Nova Scotia School Athletic Federation Golf Tournament, an event for high school students to compete at the provincial level. From 2013 to 2018, he served as NSGA Tournament Director and in 2019, was named Chair of the NSGA Tournament Committee. Bill’s contributions to the game have been especially impactful in the areas of Handicap and Course Rating. Over the span of more than 30 years, he has rated over 2400 holes in seven provinces and two US States. He has also been a Referee at more than 270 provincial and national championships over his lengthy career. Bill’s involvement with golf was also felt at the national level as he has spent more than 15 years volunteering on numerous committees with Golf Canada. He was Chair of Golf Canada’s Handicap and Course Rating Committee from 2005-2009 and has continued to serve on the committee since 2009. His contributions to the game also benefited his home club of Hartlen Point Forces Golf Club where he served on the club’s Executive Committee for the past 21 including 17 years as Rules and Handicap Chair. Away from the golf course, he worked nearly 40 years at the Geological Survey of Canada at the Bedford Institute of Oceanography before retiring in 2010.  Congratulations to Bill MacMillan of Eastern Passage, N.S. on being named the 2019 Bruce Mitchell Volunteer of the Year!]]>