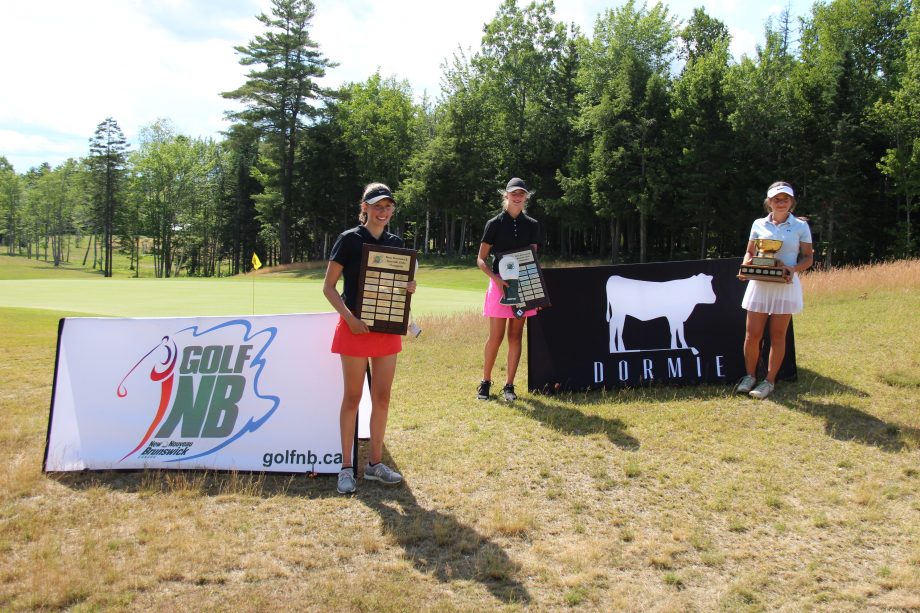 <![CDATA[<strong>For Immediate Release: The 2020 NB Junior Girls Championships has been an eventful three days as the competitors were treated to a challenging yet rewarding course, highlighted by Graham Cook’s signature greens and dunes landscaping. A variety of weather over the 54-hole competition provided a true test of skill and determination as players competed for the 2020 Golf NB Girls Bantam (Under 15) Title, the Juvenile (Under-17) Title, and the Junior (Under-19) Title. Fox Creek was a gracious host and gave the likes of Julie Gauvin and Stéphanie Roy the opportunity to compete in a Provincial Championship Event at their home club. Fox Creek’s own Julie Gauvin captured her first NB Junior Provincial Championship as she claimed the Under-19 Title after recording a 12-Over Par (84) during the third and final round on Tuesday. Combined with an opening-round 75 and second round 82, Gauvin’s determination and strategic playing sees her crowned champion at her home club. Following closely behind Gauvin in the Under-19 Title Race was Royal Oaks’ MacKenzie Deveau who after a final round score of 16-Over Par (88) finished second in the Under-19 Division. In a sister battle for third place, Amelie Guitard was able to edge out Alexandra after her third-round final score of 21-Over Par (93) which saw her finished three shots better than Alexandra who finished with a 27-Over Par (99). In the Juvenile (Under-17) Division, Stéphanie Roy of Fox Creek held onto her lead after 54-holes and will take home the Under-17 Championship Crown. A final-round score of 26-Over Par (98) paired with opening rounds of 95 and 97 was enough to fight off Under-15 Champion Addison McClune in the race for the Under-17 Title. Roy along with Gauvin join a select few Junior Competitors who have had the honor of claiming championship crowns at their home course. Addison McClune of The Riverside Country Club continued her strong run of play into Tuesday’s round recording a final score of 23-Over Par (95) to capture the Bantam Girls Under-15 Title. McClune’s event total of 299 consisting of 99, 105, and 95 was enough to put her 13 shots clear of the field. Clubmate Callie Taylor finished second in the Bantam Girls Division after a final-round 33-Over Par (105) which highlighted her steady play this week in the challenging conditions that Fox Creek presented players. Rounding out the Under-15 Division, Rachel Steeves completed a final round of 33-Over Par (105). The Sussex Golf & Curling Club member secured a third-place finish in the competition after a combined tournament score of 314. A stacked Under-15 field provided no lack of competition for the trio as they continued their title race throughout all three rounds. Mackenzie Deveau of Royal Oaks captured Golf NB’s Dormie Workshop Par-3 Challenge. The Par-3 Challenge has been added to Golf NB’s events this season to reward the player who performs the best on the Par-3’s during the course of the championship. As the champion of this event’s challenge, Mackenzie will receive a custom prize from Dormie Workshop. This year’s NB Junior Girls Championship has seen three champions crowned, Addison McClune of The Riverside as the Girls Bantam (Under 15) Winner, Stéphanie Roy of Fox Creek as the Juvenile (Under 17) Winner, and Julie Gauvin of Fox Creek as the Junior (Under 19) Winner.   CLICK HERE to view the results from Round #3 at Fox Creek Golf Club   Golf New Brunswick (Golf NB), a not-for-profit organization founded in 1934, is the official governing body for amateur golf in New Brunswick.  In January of 2006, the New Brunswick Golf Association (NBGA) officially merged with the New Brunswick Ladies Golf Association (NBLGA), resulting in one united governing body for amateur golf in the province.  Programs offered by Golf NB to its 6,800 members include 12 provincial events, rules of golf education, course rating and handicap services, junior golf development programs, and member club marketing initiatives.]]>