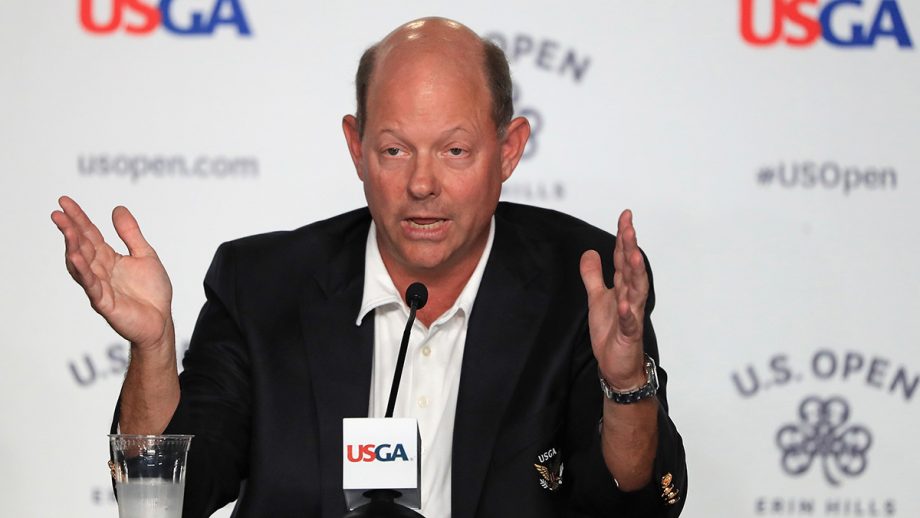 HARTFORD, WI - JUNE 14: Mike Davis, Executive Director of the USGA, speaks to the media during a practice round prior to the 2017 U.S. Open at Erin Hills on June 14, 2017 in Hartford, Wisconsin. (Photo by Andrew Redington/Getty Images)

<![CDATA[<strong>MAMARONECK, N.Y. – Mike Davis spent the last decade running the USGA, where he set up golf courses to provide an extreme test for elite players and searched for solutions to increasing distance. Now he wants to build golf courses, a lifelong passion. Davis announced Tuesday he will retire as CEO at the end of 2021, ending a 32-year career with the USGA that began with him overseeing ticket sales and transportation. He became the seventh executive director in 2011 and the USGA’s first CEO after an organizational shakeup in 2016. Davis, whose love of golf course architecture dates to when he was a junior golfer and would doodle holes on a piece of paper, said he will join Tom Fazio II in a new golf architecture firm called Fazio & Davis Golf Design. “One of the wonderful things these 32 years afforded me was I’ve gone out of my way to see most of the world’s great courses,” Davis said. “I’ve played them, studied them, read about them, taken pictures of them. I’ve read all the architecture books. I get as giddy with some architects as I do being around Jack, Arnold, Byron Nelson and Mickey Wright.” The announcement comes two days after Bryson DeChambeau crushed the notion that accuracy is tantamount to U.S. Open success. DeChambeau said he would hit driver as often as he could, even if it went into Winged Foot’s notorious rough, and he won by six shots by becoming the only player at par or better all four rounds of a U.S. Open at Winged Foot. The retirement, however, was in the works for several years. Davis had planned to announce it in September when the 2020 USGA championship season was over, so a successor could be found. Instead, the coronavirus pandemic forced the U.S. Open to be postponed from June until last week, with the U.S. Women’s Open in Houston still to come in December. Davis said he told his wife when he was appointed executive director in 2011 that he would do the job for 10 years. He told the USGA board more than three years ago that he would work through 2021 so he could try his hand at building courses. “I knew I would regret it if I didn’t try,” he said. His one regret was not seeing through the conclusion of the “Distance Insights Project.” A summary in February suggested it was time to stop increases in distance at all levels, highlighting an average gain of 25 yards over the last 30 years for elite players. The feedback process and next step have been delayed by the pandemic. “I think something is going to happen,” Davis said. “When is it going to be done? How is it going to be done? How will we introduce it? It’s a multiyear process. I’d have to stay many years to see this thing through. I’m just happy that for the first in over 100 years, we’re finally doing something. I pushed at it with the R&A, I pushed it with our own group. “I will look back saying that is one thing I am very proud of, because I just know it’s in the best interest in the game.” His last U.S. Open will be at Torrey Pines next summer. Meanwhile, Davis stays on to guide the USGA through the COVID-19 pandemic, setting up what amounts to a satellite office and a new testing centre in Pinehurst, North Carolina, advancing the distance project and working with his successor. USGA President Stu Francis said a search would begin immediately, with hopes of having the next CEO hired by the U.S. Open next summer. Davis first took over setting up U.S. Open courses at Winged Foot in 2006, and he introduced the concept of graduated rough that grew longer the farther away from the fairway. That was from his first U.S. Open experience at Baltusrol in 1980, which he attended with his father. Davis recalls thinking it was unfair that someone who missed the fairway by a little was punished more than someone who missed by a lot. He has been criticized for some setup decisions, most recently at Shinnecock Hills, though that was to be expected. His predecessor, Tom Meeks, predicted in 2009 that Davis would make a mistake at some point. “It doesn’t happen by design. It happens because it’s the U.S. Open,” Meeks said. There was so much more to the job, especially as CEO. Davis was part of the most significant overhaul of the Rules of Golf that took effect in 2019, and he signed off on a decision to ban the anchored stroke used for long putters a few years earlier. He also was executive director when the USGA signed a 12-year broadcast deal with Fox worth about $1 billion, a deal that NBC took over again earlier this year. Part of Davis already is looking ahead. He doesn’t want to design golf courses on paper. He wants to build them, and he said he would spend time on the construction crews of architects Bill Coore and Gil Hanse to learn that end of it. “I can’t wait to get my hands dirty,” Davis said, chuckling like someone who has been wanting to do this for a long time.]]>