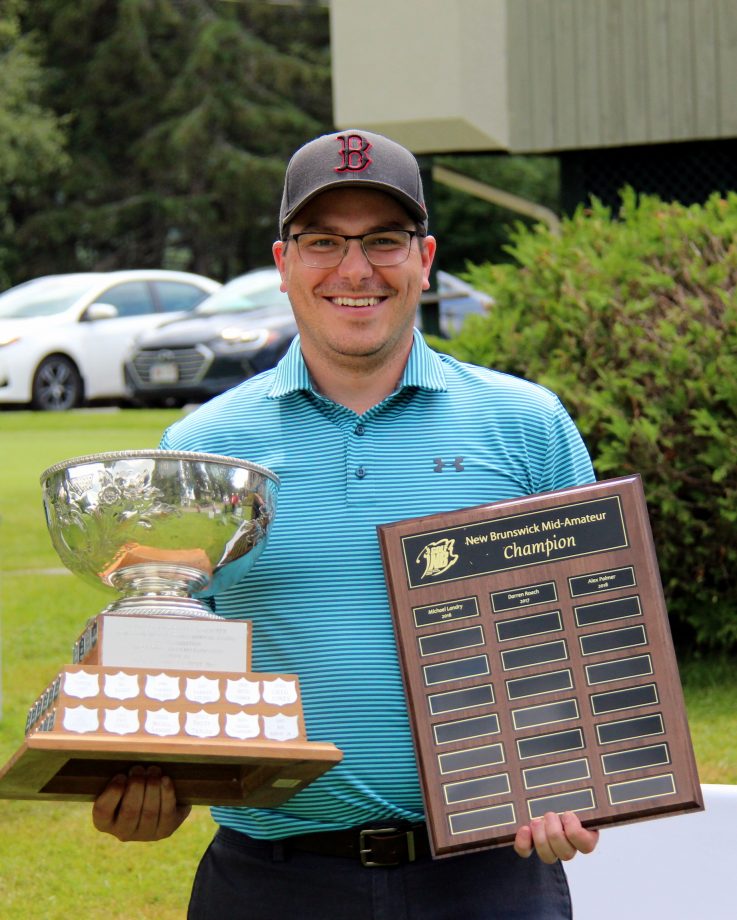 Landry entered Sunday’s final round trailing third round leader, and two-time NB Men’s Amateur Champion, Darren Roach of The Riverside Country Club by five shots.  As if that task of overtaking Roach was not going to be hard enough, he had another provincial amateur golf champion to deal with, as 2019 Nova Scotia Men’s Amateur Champion Calvin Ross of Kingswood Golf & JH Sports stood between he and Roach, two shots clear of Landry and just three back of Roach.

Undaunted Landry would mount a consistent and relentless attach of fairways and greens to put the pressure on and keep it on.  After missing the first green on the par four 1st, Landry would get up and down to save his par.  That combined with a Roach bogey would tighten the leaderboard immediately and allow both Landry and Ross to inch ever closer.

The missed green at the first, would be Landry’s last mistake of the day.  He would go on to hit the next 17 greens in regulation, or better, providing birdie look after birdie look while not giving anything back.  A birdie at the par five 4th would get Landry to within three of the lead, another at the 6th would get him one closer again and an eagle at the par five 9th would see him make the turn in a blistering four under par (-4), 33, and nine under par (-9) for the championship.

Unfazed by Landry’s steady play, Ross, the 20-year-old Texas State Bobcat product, would also birdie the 6th to move to within one of Roach and stay two shots clear of Landry, but a bogey at the 7th would give the shot right back before another birdie at the 9th would see him make the turn in a one under par (-1), 36, and eight under par (-8) for the event and in second position through 63 holes.

After making bogey at the 1st, Roach would settle down, making par from #2 through #7, but a bogey on the 157-yard par three 8th would see his lead shrink to one shot over both Landry and Ross, but he would make the turn with a one over par (+1), 38 thanks to a birdie at the 9th, good for a nine under par (-9) total and in a tie for the lead with Landry entering the home stretch.

Roach would bounce back from a disappointing front nine as he and Ross would birdie the par five 10th, but the pair would each drop a shot at the 12th, which combined with a Landry birdie on the short par four 13th would put Landry to 10 under par (-10), for the championship and in the lead to stay.  While Ross would make a final push thanks to another birdie at the par three 15th, Roach would stumble on the home stretch with a bogey at the 16th and a double bogey on the par four finishing hole to fall off the pace.

With Ross on his heels, Landry would continue to play mistake free golf carding a bogey free final round and securing a one-shot victory over Ross and locking up his third RBC Dominion Securities NB Men’s Amateur Championship in the process with 10 under par (-10), 282, total.

The turnaround award on day four goes to the Kingswood Golf & JH Sports’ Andrew MacDonald, who’s final round four under par (-4), 69, was a full 10 shots better than his day three total.

In addition to the NB Men’s Amateur and Mid-Amateur Championships, Golf NB also named six individuals who have earned the opportunity to represent the province at two of Golf Canada’s top amateur championships.  Members of Golf NB’s Willingdon Cup Team, that will represent the province at the 2019 Canadian Men’s Amateur Championships to be held from August 5th to 8th, 2019 at the Glen Arbour Golf Course & The Links at Brunello in Halifax, Nova Scotia are Calvin Ross, Stuart Earle, Bastien Nadeau and with Nick Earle serving as the first alternate.

In addition to the naming of the Willingdon Cup Team, Golf NB also identified two members of Team NB who have earned the
opportunity to compete at the 2019 Canadian Men’s Mid-Amateur Championships to take place from August 20th to 23rd at the Summit Golf Club in Toronto, Ontario.  With champion Michel Landry unable to attend this year’s championships, Golf NB’s 2019 NB Men’s Mid-Amateur Team will consist of Darren Roach and Stuart Musgrave, with the third and final position on Team NB, along with the first alternate position, being awarded later this month at the 2019 Argus Audiology NB Men’s Mid-Master Championship, to be held at the Aroostook Valley County Club from Gowan Brae Golf & Country Club from August 22 to 24, 2019.