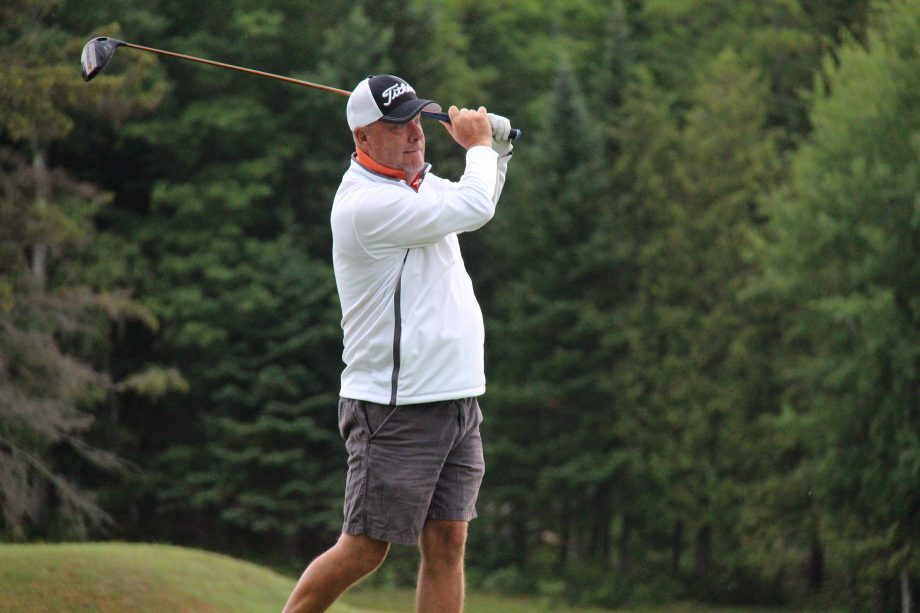 The second round of the 2019 Argus Audiology NB Men’s Senior & Mid-Master Championship got under way at the Aroostook Valley Country Club with first round leaders, in the senior division, Sonny Phillips of the Fredericton Golf Club and Ralph Michaud of Aroostook Valley going head to head in the morning’s opening game.  While Phillips would not be able to replicate his early round success from day one, Michaud would continue to take advantage of his local knowledge to on route to a two under par (-2), second round 70, and a five shot lead entering Wednesday’s third and final round.

Michaud would bogey his second hole of the day, the par four 11th, but back to back birdies at the 17th and 18th would see him complete his outward nine in a one under par (-1), 35.  After making the turn, the Maine State Golf Association members would pick up where he left off with another birdie at the par four 2nd to get himself to two under par (-2) for the day and would cruise to a second round 70, and a two day total of five under par (-5), 139.

Denis Beaulieu of Le Club de Golf de Saint-Quentin would move up the leaderboard thanks to a second consecutive even par (E), 72.  Beaulieu would grind his way to even par on the day after two bogeys and a birdie in his opening nine holes, but four birdies from #18, through #5 would not only make the shots back, but get him to two under par on the day.  With things looking up, a double bogey six, on the par four 7th would undo his birdie run and see him complete day two at even par and with a two-day total of 144.

Falling into a tie for second with Beaulieu was Dan Coulombe of the West Hills Golf Course.  Coulombe would card a consistent one over par (+1), 73, on the day thanks to a birdie at the 3rd and bogeys at the 7th and 16th holes to simultaneously come back to the field while still moving up the leaderboard.

In fourth position is 2013 Argus Audiology NB Senior Men’s Champion Mike Breen of the Hampton Golf Club.  Breen would post a one under par (-1), 71, thanks to birdies on the par five 18th and 5th holes and one more at the 2nd offset by bogeys at the 10th and 7th.  Breen’s one over par (+1), 145, two-day total is one better then first round co-leader and 2015 NB Men’s Senior Champion Sonny Phillips, of the Fredericton Golf Club, and Gage Golf & Curling Club standout Tom Cameron who sit tied for 5th at two over par (+2), 146.

Despite falling off the pace in the Senior Division, Sonny Phillips continues to lead the race to become the 2019 NB Super Senior Champion (65+ years of age). Phillips’ second round 77 (146) has him three shots clear of host Aroostook Valley’s, and two-time defending Argus Audiology NB Men’s Super Senior Champion, Herrick Hansen.  Like Phillips, Hansen would struggle on day two with a five over par (+5), 77, of his own.  After starting on the 10th, a bogey at 13 and another at 17 would see him make the turn in a two over par (+2), 38.  Another bogey at the par three 8th and a double bogey seven at the 5th would complete Hansen’s round and see him alone in 2nd in the Super Senior flight with a two day total of five over par (+5), 149.

In addition to the action on the Senior side of the draw, things are heating up in the race to become the 2019 Argus Audiology NB Men’s Mid-Master Champion.  Darren MacPherson of the Restigouche Country Club holds the 36-hole lead after carding the low round of the tournament on day two.  After beginning his round on the par four 10th, MacPherson would start quickly with birdies at the 12th and the 14th before dropping a shot on the par three 15th to make the turn in a one under par (-1), 35.  After parring Aroostook’s challenging par four 1st, MacPherson would catch fire birdieing the 2nd, 4th and 5th on his way to a four under par (-4), 68, and a 36-total of 138.

In second position is first round leader, Darren Ritchie of the Hampton Golf Club.  After a bogey on his opening hole, Ritchie would par out on the back nine to make the turn in a one over par (+1), 37.  A rare birdie at the par four 1st and an eagle at the 3rd would get him to red numbers before a bogey at the 5th and another at the 8th would see him post an even par (E) round of 72 and a 36-hole total of two under par (-2), 142, three shots off MacPherson’s lead.

After a two under par (-2), 70, on day two, Kingswood Golf’s Brian Dalrymple has moved into solo third.  Dalrymple would get off to a scorching start on Aroostook Valley’s back nine with three straight birdies at the 12th, 13th and 14th.  Another birdie at the 18th would see him make the turn in a four under par (-4), 32, but three bogeys and another birdie on his inward nine would see him give two shots back to the field and close the day four shots off the pace (73, 70, -1 / 143).

In fourth position is three-time Argus Audiology NB Men’s Mid-Master Champion (2009, 2012, 2014) Tony MacKinnon of the Fredericton Golf Club.  MacKinnon sits at two over par (+2), 144, after back to back 73’s while four-time defending champion Ed Reevey of The Riverside Country Club holds down 5th position at three over par (+3), 147, after a second round 75.

In addition to the Argus Audiology NB Men’s Mid-Master, Senior and Super Senior Championships titles, the third and final position on the Mid-Amateur Team NB will also be awarded.  The final team member will be joining Team NB that currently consists of Stuart Musgrave of the Country Meadows Golf Club and Riverside’s Ed Reevey and will represent the province at the 2019 Canadian Men’s Mid-Amateur Championship, to be held from August 20 to 23, 2019 at the Summit Golf Club in Toronto, Ontario.