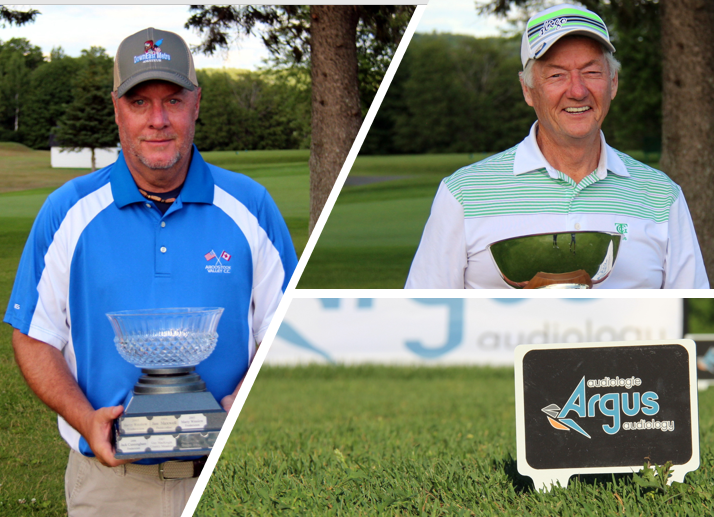 The final round of the 2019 Argus Audiology NB Men’s Senior Championship was anything but a forgone conclusion.  When the host Aroostook Valley Country Club’s Ralph Michaud teed it up on day three, he was sitting comfortably at five under par (-5) and in possession of a five-shot lead over Denis Beaulieu of Le Club de Golf de Saint-Quentin and Dan Coulombe of the West Hills Golf Course.

While to many it looked like Michaud would simply cruise to his first NB Senior Men’s Crown, someone forgot to tell Denis Beaulieu.  Beaulieu, the two-time NB Senior Team member would come out guns a blazing with a birdie streak that would not end until he reached the 5th green.  While Michaud would try and keep up, with birdies of his own at the 3rd and the 4th, bogeys at the par three 8th and the par four 9th would see him make the turn in an even par (E), 36, and in position of just a one-shot lead over Beaulieu through 63 holes.

Despite the early scare, Michaud would bounce back on the inward half and capitalize on Beaulieu’s only two mistakes of the day.  As Beaulieu would bogey the par 12th and 14th holes, Michaud would make birdie and would quickly return to his original five shot advantage.  Two more bogeys at the 16th and 17th would make things interesting, but Michaud would finish off his first Argus Audiology NB Senior Men’s title in style with a birdie on the 72nd hold to close with a final round one under par (-1), 71, and a three-day total of six under par (-6), 210.

In the Super Senior division, it would be two-time defending champion, Herrick Hansen of Aroostook Valley who would make the early move.  A birdie at the par five 3rd would see him make the turn in a one under par (-1), 35, to make up his two-shot deficit and draw even with 36-hole leader Sonny Philips of the Fredericton Golf Club.  Phillips, who at one point was four under par (-4) through his first 9 holes of the tournament, would have a roller coaster nine to open his final round.  Birdies at the 2nd and 3rd would be sawed off by a double bogey at the par three 4th.  Phillips would bounce back with birdie at the 5th but would bogey the 6th, 7th and 8th holes to complete a series of seven hole without recording a par and make the turn in a two over par (-2), 38, and tied for the lead in the Super Senior Division.

The back nine would see the tables turn.  While Hansen would bogey the 10th and 13th before making birdie that 14th, Phillips would channel his inner Ralph Michaud and match the 2019 NB Senior Champions by dominating Aroostook Valley’s three back nine par fives with birdies at the 12th, 14th and 18th balanced by a bogey on the par four 16th to post a two under par (-2), 34, on the back, a even par final round of 72 and a three day total of 218 to claim his first Argus Audiology NB Super Senior Championship by three shots over Hansen.

In addition to the Argus Audiology NB Senior and Super Senior Champions, Golf NB also named the three-player team who would represent the province at the upcoming Canadian Senior Men’s Championship to be held from September 10 to 13, 2019 at the Cedar Brae Golf Club in Scarborough, Ontario.  With Michaud, a member of the Maine State Golf Association and a United States resident, being ineligible Denis Beaulieu, Dan Coulombe and Tom Cameron have been selected as Team NB members who will represent New Brunswick at the upcoming Canadian Senior Championships.