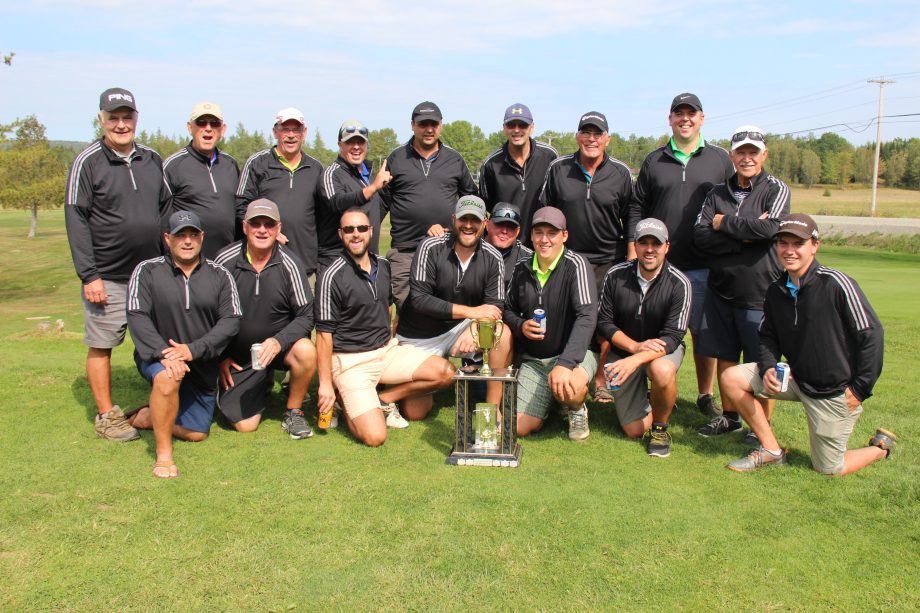 The year started with 14 teams but only 2 remained for the 2018 Past Presidents Cup Inter-Club Challenge, held at the St. Stephen Golf Club on September 15th & 16th. The Past Presidents’ Cup, Interclub Challenge, now in its 19th year, is a competition run by Golf New Brunswick (Golf NB) where clubs enter a 16-player team (divided into five different handicap flights).  Each round of the competition consists of a home and home series between the clubs with the winner advancing to the next round.  This year the Memramcook Golf Club and the Lakeside Golf & Country Club both reached the final round for the first time. Both days were played under sunny skies and warm temperatures perfect for September golf.

The first match of the day saw the Memramcook’s A-flight pairing of Luke LeBlanc and Sean Casey take a three-point victory over Lakeside’s Remi Comeau and Lanny Strong for a 10.5 point to 7.5-point lead.

The second pairing had B-flight players which saw Lakeside bounce back with a two-point change as Gary MacDonald and Barry Perry were tied with Memramcook’s team of Gino LeBlanc and Eli Richard after 9-holes but took the first 2 holes on the back and then traded points coming in to win 10 to 8 points to close the overall lead to 1.

Match #3 (also B-flight), would see Lakeside continue to apply the pressure and have the Lakeside team of Donny Maillet and Mario DeGrace win by three points over Memramcook’s Donald LeBlanc & Steve Pelletier. The front nine was close with Lakeside leading by 1 but after winning three holes to Memramcook’s one on the back they came out with 10.5 points to 7.5 points.

Match #4 also saw a 10.5 to 7.5 win by C-flight Lakeside’s Donovan Mallaley and his partner Roger Robinson over Andy and Roger Leblanc of Memramcook. Like the match before, Lakeside only had a 1-point lead after the front nine and grabbed two more points on the back.

Memramcook decided to make up three points of their own in the C-flight Match #5 with Jules LeBlanc and Donald J. Leblanc winning over Lakeside’s Richard Russell and Victor Bourgeois. The Leblanc twosome were one down after nine holes but gained control on the back nine with a four-point win for a 10.5 vs 7.5-point advantage. By this time in the overall competition Lakeside had a 2-point total lead over Memramcook 46 points to 44 points.

When the D-flight started, the 6th Match found the biggest margin of the day when Lakeside’s Rick Fury and Jeff Worton were up by one point on the front but gained 3 points on the back over Memramcook’s Roger A. Leblanc and partner Eugene Cormier for an 11 to 7-point match.

Match #7 would see a 9-points to 9 draw between D-flight Memramcook’s Rene Dupius and Sebastien Dobson and Lakeside’s Eddie Saulnier and Wayne O’Brian.

Match #8 had Lakeside’s Ray Melanson and Brian Bell be down by a point to Memramcook’s Paul Neate and Felix LeBlanc but on the back would win the first 4 holes and two other compared to the 3 won holes by Memramcook for 10 to 8 victory in the E-flight.

By the end of the day Lakeside had 76 points to Memramcook’s 68 points for an 8-point lead.

Day 2 would see Memramcook come out swinging in the 9th match of the event! Their pairing of Luke LeBlanc and Sean Casey would lead by 6 points after the front nine over Lakeside’s Remi Comeau and Lanny Strong. Lakeside was able to tie them on the back-nine for a 12 – 6-point total cutting in on Day 1’s 8-point lead.

Match #10, had Memramcook keep the accelerator down with Gino LeBlanc and Eli Richard also winning by 6-points over Lakeside’s Gary MacDonald and Barry Perry. Their team also applied the pressure on the front nine with a 5-point lead and won by 1-point on the back to secure another 6-point victory for Memramcook taking the total 2-day lead by 4 points.

Memramcook’s Donald LeBlanc & Steve Pelletier kept the momentum going and were leading after the front nine by 1-point, but Lakeside’s duo of Donny Maillet and Mario DeGrace gathered 7 points of the 9 available on the back for a total of 10.5 to 7.5 to win by three points like they did the day before and helped close the gap.

In “C” Flight, match #12, would be a close match with Lakeside’s Donovan Mallaley and his partner Roger Robinson over Andy and Roger Leblanc taking a 1-point lead on the opening nine and the teams tying on the back for a 9.5 to 8.5 margin and tying both teams at 108 points each overall. Match #13 didn’t resolve anything as we saw our first tie of the day between Lakeside’s Richard Russell and Victor Bourgeois and Memramcook’s Jules LeBlanc and Donald J. Leblanc receiving 9-points each by the end of their match.

The 1st “D” Flight match of the day (#14) saw Lakeside’s Rick Fury and Jeff Worton jump out to a 3-point lead over Memramcook’s Roger A. Leblanc and partner Eugene Cormier but Memramcook won 7-points to 2 points on the back to take the match 10 points to 8 for a lead of 127 to 125 points overall.

Match #15 brought the pressure from Memramcook’s Rene Dupius and Sebastien Dobson over Lakeside’s Eddie Saulnier and Wayne O’Brian by winning the front nine by two and the back by 3 for a 11.5 to 6.5 total and overall total of 138.5-points to 131.5-points for a 7-point Memramcook lead.

It came down to the 18th and final match of the weekend that would see the “E” Flight match of Lakeside’s Ray Melanson and Brian Bell lead by 5 against Memramcook’s Paul Neate and Felix LeBlanc after the front-nine to close the overall total to 138.5 to 140.5 for Memramcook but they were only able to managed a tie on the back nine for a 11.5 to 6.5 point total.

At day’s end, Memramcook made the comeback complete and win the 2018 Past President’s Cup by a two-point margin of victory of 145 to 143 points.