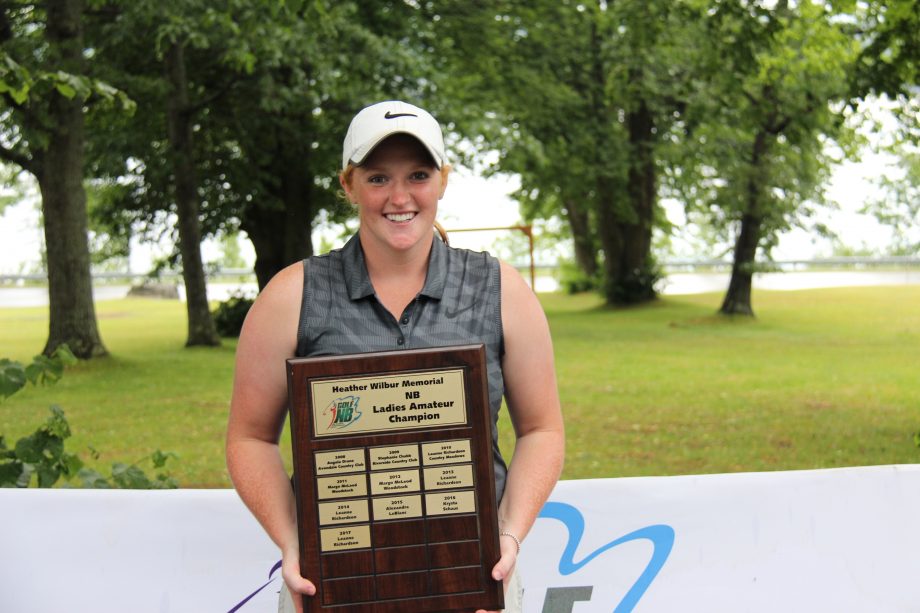 Coming out on top was hometown player, Morgan Matchett who’s third round 4-over par 75 was enough to propel her into first place and capture her first NB Ladies Amateur Provincial Championships. Matchett’s final round included 13 pars, 3 bogeys, 1 double and 1 birdie which finalized her three-round total of 228 (74,79,75). Finishing in second place in the amateur division, three shots off the lead is Country Meadow’s Leanne Richardson who recorded an 8-over par 79 during her final round to move her 231 (75,77,79) total for the event. Rounding out the top three is Chrissie Spidell of Anderson, South Carolina who also finished the event with an 8-over par 79, 232 (74,79,79) total.

For the second consecutive year, Leanne Richardson has won both the NB Ladies Mid-Amateur Championship and the NB Ladies Senior Championship as she edged out Chrissie Spidell to win by one stroke. In 3rd place in both the Senior and Mid-Amateur Division was Kathy Grebenc of Gowan Brae a total score of 21-over par, followed by a two-way tie for 4th place in the Mid-Amateur Division between Fredericton’s Maureen O’Donnell and Allison Chisholm of The Riverside Country Club at 26-over par.

In the Super-Senior Division, Kathy Grebenc of Gowan Brae edged out club mate Brenda Parrott to win the 2018 NB Ladies Super-Senior Division by 18 strokes. Kathy finished the event with an 8-over par 79 to ensure her victory. Finishing in 2nd place is Brenda Parrott of Gowan Brae who finished with a score of 39-over par, 252 (78, 90, 84), following closely behind in a tie for 3rd place is Penny Dickeson and Connie Bothwell of Fredericton Golf Club who both finished at 43-over par, 256.

Joining Matchett as part of the 2018 NB Ladies Amateur Team is Mackenzie Scott, Laura Wesselius and Angela Welch serving as the first alternate.  In the Senior ranks, New Brunswick will be represented by Leanne Richardson, Allison Chisholm, Pam Cossey and Mary Walton-Rossignol as the alternate.